MasterChef meets The Jetsons: 2018 is the year of the smart kitchen

Voice controlled, AI cooking is coming to a kitchen near you 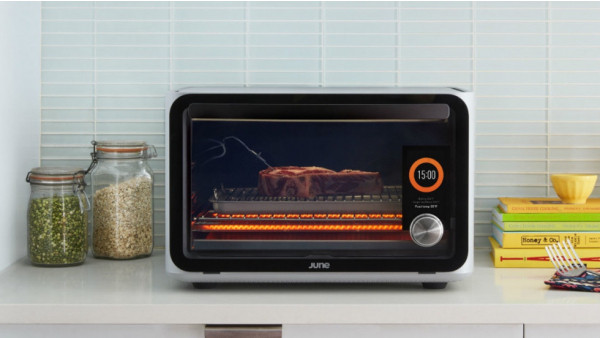 The Ambient is reader-powered. If you click through using links on the site, we may earn an affiliate commission. Learn more
Gareth May
@garethmay
Monday

The kitchens of tomorrow have now become the kitchens of today, changing the face of the most interactive room in the home for ever more (or, at least, until after dinner).

And weŌĆÖre not talking about the predictable iterations that promise to drop a flavour bomb on din-dins; the digital pressure cookers, the power air fryers, the bacon toasters. Sure, they might be new wave appliances but theyŌĆÖre coming in on the same tide.

Fasten your apron strings, this year itŌĆÖs all about chefŌĆÖs assistants, shiny smart ovens, and the all-seeing fridgeŌĆ”

HooverŌĆÖs touch-screen Vision oven, launched in September, has a door that doubles up as a 19-inch, fully-interactive touch screen, allowing users to watch video cooking tutorials, access selected websites such as Deliciously Ella, and save and amend favourite recipes. It also has an in-cavity camera, revealing the contents of the oven on screen as well as to any connected devices.

As for those wanting a little interior design consideration, at CES this year, GE Appliances announced their 27-inch Kitchen Hub. The smart screen connects to appliances, has two different cameras (one for video chat and playback, another primed over the oven for Instagramming), and is fully integrated into the kitchen, doubling up as a cooker hood and extractor fan. ItŌĆÖs set for a late 2018 release.

Likewise, the Xperia Touch, a portable interactive projector that transforms any wall or table into an 23ŌĆØ HD touch-screen brings the kitchen table to life with recipes ŌĆō even if it did flop with reviewers after its release last year. Little bother because reading recipes off screens may already be pass├®.

Death of the chef

Last year, The Future LaboratoryŌĆÖs Insight Editor Daniela Walker coined the phrase anti-intuitive cooking. Walker, who presented the macrotrend at the Food and Drink Futures Forum (which also saw the introduction of ideas such as activism dining and no-bar bars), argues that the introduction of smart devices in the kitchen are ŌĆ£lessening the intimidation factor that many people feel when cooking a meal from start to finishŌĆØ. If you can call it cooking that is.

ŌĆ£You could argue that we have become a nation of foodies and yet at the same time people are cooking less than ever before,ŌĆØ Walker told The Ambient. ŌĆ£A lot of it has to do with our culture of ŌĆśbusy-nessŌĆÖ ŌĆō no one has the time to think of meals, recipes or plan ahead, so what we are seeing now are brands and smart appliances bringing together those competing desires of wanting a gourmet home-cooked meal but also one that requires less time.ŌĆØ

One such start up tapping into this new stream of instant cheffing is robotics start-up Zimplistic and their Rotimatic product. A ŌĆśtech hybrid robotŌĆÖ kitchen appliance that can make a selection of flat breads ŌĆō such as roti, tortilla and even pizza bases ŌĆō at the touch of a button in as little as 90 seconds. After sale success in Singapore and the US itŌĆÖs now entered the UK.

Then thereŌĆÖs BuzzFeedŌĆÖs Tasty One Top, revealed last year. The smart hob can synch to the accompanying Tasty app and cook meals precisely, automatically adjusting to the recipeŌĆÖs temperature.

Rise of the chefŌĆÖs assistant

Kitchens are fast becoming the technological embodiment of a commis chef, telling you how to cook a perfect duck ├Ā l'orange, documenting the calories in it, and then scanning the shelves for a near out-of-date dessert.

The Samsung Family Hub 3.0 smart fridge is at the vanguard. It not only has cameras so you can see what food you have while out shopping but its in-built Meal Planner app can recommend what you should cook for dinner based on the ingredients you already have. And, of course, it also has an interface.

Another fridge by LG, the ThinQ, has a similar functionality and will have Amazon Alexa actually dictate the recipe to you as you cook. And Whirlpool, which last year purchased recipe finder Yummly, the app that can visually identify foods and recommend dishes, has integrated it into their ovens.

ItŌĆÖs not all about large appliances either. SmarterŌĆÖs Wi-Fi iKettle 3.0 will notify you when water reaches a perfect temperature, for baby formula for example, and can be controlled from your device and connects to Amazon Alexa, Google Assistant, and IFTTT.

Professor Mark Jolly, head of sustainable manufacturing at Cranfield University, told The Ambient that the next big step in the evolution of the smart kitchen is the connectivity between food products and store cupboards, helping environmentally-aware consumers make more informed choices.

ŌĆ£For consumers this means food products can have ŌĆśsmart tagsŌĆÖ that show the detail on provenance of all the main ingredients, highlighting whatŌĆÖs local and grown organically and what comes with huge food miles and costs in terms of pesticides,ŌĆØ he says. ŌĆ£Data from the smart kitchen will then be sent back to producers, allowing for more personalised and responsive food production from smaller local providers based on real needs, rather than relying on mass production from large central food producers."

German firm Grundig are already future-proofing their appliances with the needs of such ethical eaters in mind, with a fridge that dons the gravy-splattered cape in the fight against food waste. Using what theyŌĆÖre calling FreshMeter technology the fridge assesses the freshness of the meat in its custom compartment by odour, detecting and then displaying the condition of the food via an LED indicator with green for fresh, yellow for going off and red for eat and die (or, just, dispose).

Gino Grossi, brand manager at Beko Plc. told us: ŌĆ£Innovation is at the heart of what we do, but weŌĆÖre also really proud of the fact that weŌĆÖre able to channel that into a meaningful cause. We believe the fight against food waste starts at home, and our future product innovations will empower consumers to do just that.ŌĆØ

Culinary heathens clinging to their Pot Noodle, resistance is futile. YesterdayŌĆÖs technophobes are being diced and sliced and popped in a forward thinking, four-bean stew. The futureŌĆÖs nowŌĆ” and devilishly delicious.