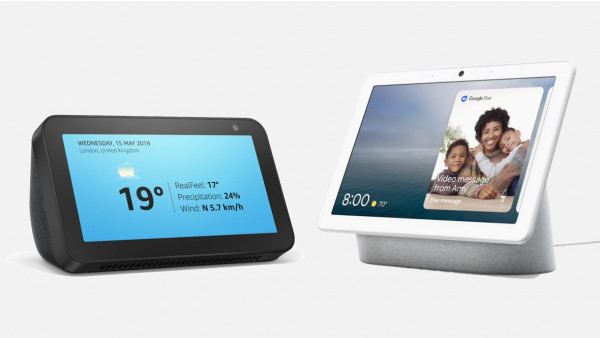 Smart displays have taken off, and more importantly, they're finally worth owning. We've seen screen-toting smart speakers from Amazon, Google, Facebook, Lenovo and others.

But as is so often the way, it's Amazon and Google who are leading this race. Amazon kicked things off the with Echo Show and so Google made a smaller, much better looking smart display called the Nest Hub. Then Amazon launched its own shrunken version of the Show to compete. And that brings us to here.

Amazon Echo Show 5 or Google Nest Hub? Both share plenty of similarities; but there are some important differences between these two smart speakers. Below, we put them head to head.

Everything is relative, which is why despite making such a point about the Google Nest Hub being so small, it now looks positively huge next to the Echo Show 5. The Nest Hub has a 7-inch display 1024 x 600 pixels, while the Show 5 has just a 5.5-inch screen 960 x 480 pixels.

That said, the Show 5 benefits from its more diminutive dimensions, making it easier to slip onto a bookshelf and function as the perfect bedside alarm clock. In sum, the Echo Show 5 feels more versatile than the Nest Hub, thanks to a display that's unlikely to be much larger than your smartphone.

One feature the Echo Show 5 has, which the Nest Hub doesn't, is a built-in camera. However there's a shutter you can slide over to block that camera, should you be concerned about privacy.

Google's decision to omit a camera from the Nest Hub was based on privacy and wanting users to feel they could put the speaker in their bedrooms and not feel paranoid they were being watches. Amazon's taken the slightly smarter route of including a camera but providing a physical means to block it when you want.

On design alone, we think the Show 5 looks better, however the larger screen makes the Nest Hub easier to see.

If you're already bedded into either Alexa's or Google Assistant's ecosystems, that will probably be the biggest determining factor in which of these two speakers you choose. When it comes to controlling smart home devices especially, both will work best with.

As mentioned, only the Echo Show 5 has a camera, which can be used for making video calls with other Echo Shows or with the Alexa smartphone app.

The good news is that the Show 5 (and larger Show) have an easy-access panel for Alexa features and your smart home controls - just swipe in from the right - making it easier to view security cameras, control lighting groups and so on.

Google's speaker has Home View, which also gives you a complete overview of all your connected smart home devices. Both of these are important, as one of the best reasons to own a smart display is for controlling your smart home devices. Yes, you can control your lights etc with any smart speaker, but having a display adds another dimension.

For example, if you have a compatible smart camera or doorbell, you can view the feed on your Echo Show or Google Nest Hub (right now, the Echo Show 5 supports more smart cams than the Nest Hub). It also means that when controlling your smart lights, you can see and adjust the brightness and colors on screen (as long as your smart lighting supports the integration).

As we say, your preference of platform should dictate which way you go. On the whole we find Alexa more versatile for smart home devices, while Google tends to be better at answering search queries. If you're buying a smart display for video, then you should know that YouTube is currently only compatible on the Google Nest Hub, and while the service is back on Fire TV, there's no word on when it might appear on Echo Show speakers... although there is a workaround.

For the time being, you'll have to use the browser workaround. If you're an Amazon Prime, you can stream videos straight to the Show 5, but that screen is too cramped to enjoy it. Good for watching recipe videos on, though.

The Home Hub also doubles as a fantastic digital photo frame, one that beats the Echo Show 5 for two reasons. Firstly, it has a bigger display and a superior ambient light sensor, making the pictures often look stunningly like real photographs from afar.

Second, it can draw on the power of Google's AI, which will pick out your best pictures and leave out the ones where you've awkwardly cropped out your dad's head. The Echo Show can display photos too, either from Amazon Photos, the Alexa or your Facebook image library, but it's just nowhere near as good on the smaller screen.

However, both devices are often discounted given that they are pretty old now... so wait for a sale before splashing your cash.

Both these smart displays have their strengths and weaknesses, and as we've said, it really comes down to which ecosystem you're in. If we had to pick a champion, it's the Google Nest Hub, but with the Echo Show 5 Amazon has made its best smart display yet, and for Alexa users it's the best pick here. While that small screen has limitations, it affords an overall smaller size that has its advantages.

Some people will prefer the look of the Show 5, but as the better digital photo frame, we prefer how the Google Nest Hub blends into the background when idle. But if you're into video chatting? Go for the Echo Show 5 instead, as the Nest Hub doesn't have a camera.