Fire it up: Using the Amazon Fire Tablet in Show Mode

Can it serve as an Echo Show replacement? 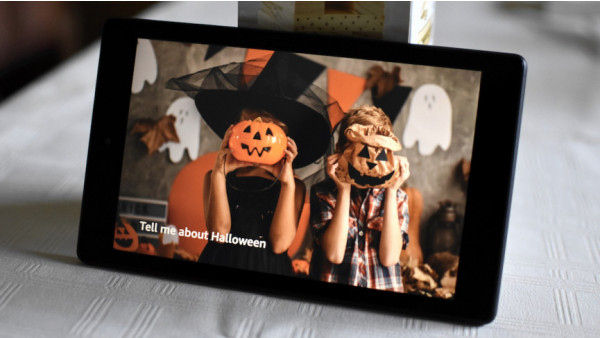 Amazon kicked off the battle of the smart displays with its Echo Show, and followed that up with the cuter and more nightstand friendly Echo Spot. But the Show wasn't Amazon's first foray into screen-based devices.

The company has its series of very popular Fire Tablets and Fire TV and while Alexa has been present on both it hasn't have a full visual presence like it does on the Show. That was, until Amazon decided to bring something called Show Mode to its Fire Tablets.

The mode basically turns your Fire Tablet into a portable Echo Show. But is it actually any good, and could it serve as a more affordable Echo Show replacement? I disabled the Polk Command Bar with Alexa that I usually rely on and lived purely with the Fire Tablet with Show Mode enabled to find out.

The first thing you need to realize about the Fire Tablet is that it's well, an affordable tablet. It's almost too affordable, and if you're used to something like an iPad Pro, as I am, you'll notice how sluggish it is. Which is fair: these are affordable tablets made for entertainment and/or handing to your kids so they shut up for a couple of hours.

You have a couple ways you can get the Fire Tablet into Show Mode. The first way is simply to say, "Alexa, enter Show Mode". The second way is to swipe down on the notification pane and click the toggle. The third way is to buy the Show Mode Charging Dock, which will vary in price depending on whether you buy it for the 8-inch or 10-inch Fire Tablet. As soon as you dock the Fire Tablet into these, Show Mode pops up. It's like Google's new Pixel Stand.

I was not able to try out the Show Mode Charging Dock, but I can tell you right now that it's essential. It turns out that the Show and Spot have angled displays for a reason, it's easier to look at when you're walking around and, say, getting ready for work. You can just glance over every once in a while.

Because the Fire Tablet is, you know, a tablet, it would sit flat on my nightstand. That means when I activated my Flash Briefing every morning I wouldn't see much of the information on the display. I couldn't see the video from Reuters TV or the weather, I had to listen as if it was a regular Echo Dot.

I found myself either sitting the Fire Tablet up against something else, or just picking it up and using it as a tablet, but relying on Alexa. If I wanted to watch a music video, for instance, I just asked Alexa to find it for me via Vevo. The good thing about using Show Mode as a tablet is that it was easy access to scroll through options like music videos and recipes.

It was also easy to simply tap on the display to see what else Alexa can do in Show Mode. The benefit of having a Fire Tablet in Show Mode is being able to take it with you wherever you need. I decided to do some work outdoors one day, and brought along the Fire Tablet, used the personal hotspot on my phone and had an Echo Show there, ready to listen to my beck and call. If you've got a backyard or front yard and want to extend your smart home a bit, it can be handy.

Ergonomic issues aside, how does Alexa work on the Fire Tablet? Pretty well, actually. I was able to easily transfer over my daily routines to the Fire Tablet. Most of how I interact with Alexa is using the Flash Briefing, controlling my lights and checking the weather.

Not only does that have Home View, which lets you see all your smart home devices, it presents some light controls on the display when you use your voice to activate them. Those are great, helpful features. They would be even more helpful on a tablet form factor like the Fire Tablet. Unfortunately, Show Mode doesn't have these abilities yet.

It's especially disappointing that these tablets don't have these smart home controls in Show Mode, because tablets have quickly become a great computing platform for lounging around on the couch. It would be so convenient to be able to keep the Fire Tablet in Show Mode and control everything.

There is regular Fire Tablet mode, but at that point you could just use your smartphone. Also, you're not using it in Show Mode. This is Amazon, and Alexa has long been the assistant best at smart home integration - yet it doesn't have a great way to visually control your devices. It's a bit of a let down.

On the plus side, Fire Tablets are affordable. You can get the Fire Tablet with a Show Mode Charging Dock for $110, which is about $10 less than an Echo Spot, which comes with a far smaller display.

The Fire Tablets with Show Mode are a more affordable alternative to the Show and Spot. They have definite advantages, largely thanks to portability and the versatility of also doing more tablet-y things. Just make sure you get the Show Mode Charging Dock with it.