What the heck is the Recast, and why do you need it? 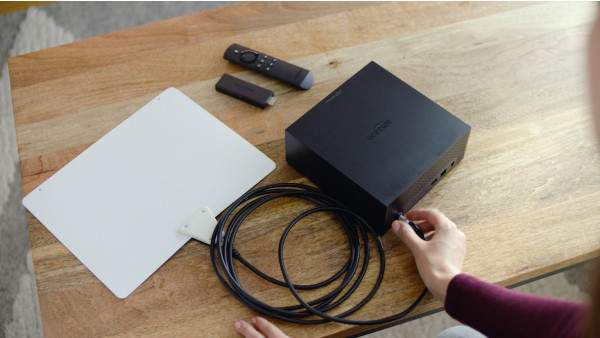 Amazon announced a whole lot of devices at its recent surprise Alexa event, and for the most part a lot of them were easy to understand. There's a new Echo Dot, Plus and Show. There's a microwave, a sub, a smart plug and even a gadget for the car.

One gadget that was a bit more convoluted was the Fire TV Recast. It's a device that needs other devices, and something that's extraordinarily niche. But what exactly is it, how does it work and can your life be improved by having it?

That's what we're out here to sort through, so follow along friends.

Fire TV Recast: What is it?

The Fire TV Recast is an over-the-air DVR. It's simply a big box that you plug an HD antenna into. It then picks up local HD channels and streams them to your devices via either Wi-Fi or Wi-Fi Direct.

It's also got storage ŌĆō either 500GB or 1TB ŌĆō to store hours upon hours of recorded local content that you can play back on your devices. Think of it like a 2018 version of a Slingbox.

The Recast will stream content to your Fire TV streaming devices, Fire tablets, Echo Show and the Fire TV app on iOS and Android. You'll be able to watch local TV live in home and on the go and record shows and sports from the likes of Fox, ABC, CBS, NBC, PBS, The CW and more.

Naturally, you can also partner it up with Alexa. Ask Alexa to rewind your program, record shows, manage your recordings and more. On the Fire TV, you'll see a new DVR tab that'll act as the hub for your Recast stuff.

What the Recast isn't is a TV streaming box. You don't even have to put it near your TV. It's also not going to house any smart software or hardware. There are no apps or operating systems here.

Fire TV Recast: How does it work?

Well, the Recast has a couple of ports on the cable. There's an antenna-in port, an ethernet port and a power port ŌĆō that's it. You're going to need to buy an HD antenna separately.

You will then need to either download the Fire TV app onto your iOS or Android devices or buy a Fire TV streaming stick. That's right, you can only see content from the Recast if you have a Fire TV device or the app on your phone or tablet.

You'll then be able to stream 720p local HD from the antenna to your device. Why 720p? Because that's what the local antenna broadcasts are locked at. Sorry, no 1080p or 4K until America's over-the-air broadcast standards are upgraded.

Read this: How to control your TV with Alexa

As previously mentioned, you'll be able to watch local HD channels ŌĆō including TV shows, news reports and sports from broadcasters like ABC, CBS, Fox, NBC and The CW for free. This will all be laid out in the DVR section of the Fire TV interface, and you'll get a channel guide to see everything that's playing live.

This DVR section will also integrate other services. For now, it'll integrate PlayStation Vue's channel guide if you're a subscriber. Likewise, if you use apps like HBO or CBS All Access that have live components, they'll also get dumped in the DVR section. It's possible Amazon will beef up integrations and features in the future, like adding other streaming services like Hulu with Live TV.

Now, to get a little technical: the Recast will use Wi-Fi direct when you're streaming directly to an Amazon device, like a Fire TV or Echo Show. It'll use Wi-Fi to broadcast to other devices, like an iPad. Finally, if you're out on the go it'll use Wi-Fi to stream out, and then your cellular data connection will pull that stream in.

Fire TV Recast: Why do you need it?

Hold on, this all sounds a little old school ŌĆō doesn't it? Slingbox still makes devices like these, right? Plus, there's TiVo and AirTV. Cutting the cord has also become easier than ever thanks to streaming TV services like Hulu with Live TV and YouTube TV.

So why in the world do you need a Fire TV Recast? For a very specific reason. If you're looking to cut the cord and want to primarily dedicate yourself to services like Netflix and Amazon Prime Video, one of the biggest drawbacks is live TV and sports.

You're really losing out on the broadcast channels. You can easily get them back streaming by signing up for a streaming TV service like YouTube TV, but that's going to cost you around $40 a month.

You can get an HD antenna, but that locks your broadcast channels to a single TV, which doesn't allow you to watch on the go or record. On the other hand, competitors like Slingbox and AirTV don't offer the same features that the Recast does.

For instance, the Slingbox is built to let you take your existing cable or satellite subscriptions on the go. If you're trying to cut the cord, that's not going to help you at all. AirTV, on the other hand, lets you cut the cord but doesn't have DVR capabilities of the Recast.

The Fire TV Recast is available for pre-order now on Amazon's website in the US. It will begin shipping on 14 November. It comes in two configurations. There's the 500GB two-tuner Recast for $229.99 and the 1TB four-tuner version for $279.99.