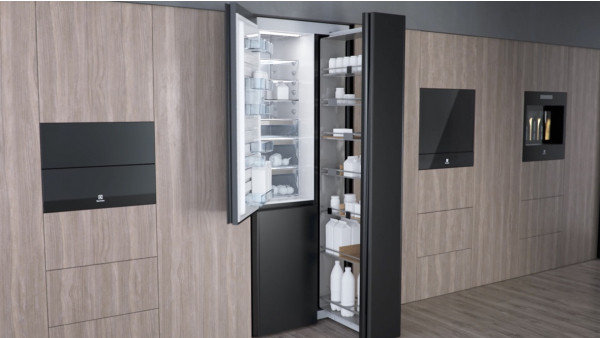 Don't be fooled by kitchen TVs and displays slapped on every appliance. That's not the only smart future imaginable, if Electrolux's intriguing batch of cooking concepts is anything to go by.

"From the trends IŌĆÖm seeing, I think a lot of screens will disappear," says Simon Bradford, VP of design EMEA for Electrolux. "I donŌĆÖt think weŌĆÖre going to see bigger and larger screens on appliances. Voice is going to play a huge role and human interaction in that sense of gesture and presence. I think we'll see more sensors, as in, appliances feeling your presence inside the kitchen. YouŌĆÖre going to be able to personalise your kitchen experience according to your needs."

Read this: The best smart kitchen devices and appliances

As for how we get there, he predicts that there will be more of an emphasis on subtle feedback. "Technology is going to be embedded, itŌĆÖs going to happen behind the hinges without you necessarily knowing itŌĆÖs going on. But you should see the benefits. AI is going to play a big role ŌĆō the appliance will almost know what youŌĆÖre going to cook so you wonŌĆÖt have to instruct it."

We asked Bradford to take us through five of the ideas shown off at this year's EuroCucina show in Milan. As for when they might become reality, "theyŌĆÖre all in various states of maturity", he says. "A lot of these ideas have already been consumer tested and on a couple, we've had phenomenal feedback which is more confirmation we're on the right track."

According to Electrolux, presence sensing could be a big part of our future kitchens. The SenseOven 2.0 concept can alter the temperature and cooking time once it knows which dish you're making, but the really neat feature is the presence sensors for the automated oven door, which changes its opacity when it detects you're near enough to peek inside. When you walk away, it returns to black glass to blend in with the rest of the kitchen.

"Can the SmartOven actually react to the presence of the person inside the kitchen?" says Bradford. "Or give you subtle feedback on when your food is going to be ready or what tray level to place that roasted chicken or quiche or pizza youŌĆÖre making? ItŌĆÖs a subtle, natural and human way. At Electrolux, we talk about making technology human."

The FlexiChill concept was one that came from Electrolux's professional division, where they work with professional kitchens and Michelin starred chefs, but the team wanted to scale it down for the regular-sized kitchens of wine enthusiasts. The chiller and dispenser injects argon gas into wine bottles once they're opened to preserve the flavour, as well as keeping them at the correct temperature.

"We cook a lot with these chefs," says Bradford. "The whole wine story came in with wine pairing ŌĆō whatŌĆÖs the right white wine to have with the type of food youŌĆÖre eating? What temperature should it be kept?

"Then the idea came up ŌĆō when you open up a nice bottle of wine in the evening you might not want to empty the whole bottle of wine in one go. There are plenty of professional graded appliances. You get these big units of ten to twelve bottles but no-oneŌĆÖs actually got a 60 by 60 unit where you can have a beautiful horizontal alignment with your oven, maybe your coffee machine and your nice wine dispenser to store four bottles of your favourite wine."

DESIGN NOTES: "A lot of the kitchen manufacturers are working with real wood, real glass, real stone," says Simon Bradford. "The richness of the materials that are actually being used keeps getting more and more sophisticated in that sense. WeŌĆÖve seen a shift in the last five years from glossy white kitchens and painted cabinetry to wood and real materials."

Part of Electrolux's ambition for the fridge is to make it feel more like an easy access pantry. So the Serve and Preserve concept has three compartments ŌĆō the fridge, the freezer and the larder ŌĆō with optimised temperatures across all three and pull-out pantry shelves.

The Visual Garden fridge concept, meanwhile, uses proximity sensors ŌĆō like the SenseOven ŌĆō to detect your presence then light up the fruit and vegetable tray ŌĆō complete with built-in Vitamin C light ŌĆō so you can see what you've got in.

"You wouldnŌĆÖt believe ŌĆō 30% of produce inside a fridge goes bad because simply you have poor visibility on what youŌĆÖve got," says Bradford. "With the Serve and Preserve concept, you have this pantry fridge door that you open up and you have visibility and access things from both sides."

This silent extractor fan has a handcrafted ceramic finish and can store boxes for a handy-to-reach herb garden on its upper surface.

Bradford says sustainability and bringing natural elements into the kitchen are two key concerns when it comes to developing new ideas for future appliances: "ItŌĆÖs emphasising the sustainable way of thinking through changing peopleŌĆÖs behaviours."

DESIGN NOTES: "We want the appliances to seamlessly integrate inside the kitchen. We were thinking ŌĆō whatŌĆÖs the next step from glossy black glass? This is where we started working with matte black glass, it becomes something more human, more subtle. ItŌĆÖs not black anymore, itŌĆÖs more charcoal-ish, more of a dark grey.

This one's pretty nifty. CleanCut is a steam based steriliser and cleaner designed for knives and chopping boards, with the aim of cutting down on the hot water we use to clean these items during food prep of, for instance, chicken and vegetables. The idea is that it saves time and slots seamlessly into your worktops.

"The whole idea came up that we use steam daily," explains Bradford. "We use steam in our cooking appliances, we cook with steam in our ovens, we use a form of steam in our dishwashers and our washing machines, so we thought ŌĆō how can we design a simple chopping board and knife steriliser and cleaner? So you put it down in the slot and youŌĆÖll be able to sanitise your chopping ware easily and with not so much water being wasted."