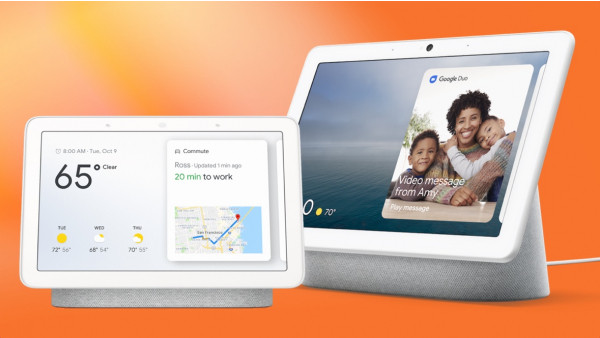 In truth, there's not a whole lot to split between the two Google Smart Displays, and until the Nest Hub Max is given a release this summer, and we've managed to test out its capabilities, it's hard to make full judgements on whether it's better and worse than its smaller sibling.

Read this: What is happening to Works with Nest?

So, below we'll be giving you a run-through of the key aspects and how they compare on paper - including display and design details, sound performance, features, price and, obviously, the size.

Right, let's not mess about - the main thing to be aware of here is that the Nest Hub is significantly smaller than the Nest Hub Max. They share an identical shape, offering a white-bezelled tablet essentially stuck onto a speaker, but the Nest Hub features a 178.5 x 118 x 67.3mm size and 7-inch LCD screen that's dwarfed by the Hub Max (for which the measurements aren't yet official) and its 10-inch, 16:10, HD display. For context, the second-gen Amazon Echo Show has a 10-inch screen, too, and so does the Lenovo Smart Display.

This is probably the most eye-catching difference between the pair in the design department, though they do also come in different colors. The standard Nest Hub is available in chalk, charcoal, aqua and sand, while the Max comes in just chalk and charcoal for now. Expect that list to expand as time goes on.

So, yeah, different size and different colors - but Google has also included a significant change within the heart of the Hub Max that represents a big shift away from what the standard Hub offers - and that's a camera. In place of a front-facing snapper on the Hub, as we know, there's an ambient sensor; something that's used to help adjust the screen brightness to match the room.

In comparison, Hub Max builds in a camera - and a Nest one, at that. This means you'll get all the same features as you would with a Nest Cam IQ - alerts to your Nest Aware account, everything. And even if you don't buy into the full Nest - sorry, Google Nest - experience, then you can still see what's happening in the room your Hub Max is in and use it for Google Duo voice calls.

It's even able to recognize and remember faces and handle gestures - great for when you hands are messy in the kitchen and you want to, say, pause the music. Maybe not so great for those with potential security fears, though, so, you know, keep that in mind.

Since these two are both running Google Assistant in pretty much the same package, we're not going to try and pretend the feature sets are much different. With both, you're getting the usual Assistant Easter eggs and smart home control, as well as the ability to play YouTube, connect using Chromecast and play music through services like Spotify (though, crucially, not Apple Music).

Of course, one of the other big lures of this Smart Display pairing is its ability to act as a digital photo frame, working with Google Photos and cycling through a selection of your favorites.

The only real differences in software come as a result of that built-in Nest camera we mentioned in the section above. You're getting, essentially, a Nest security camera built in, as well as facial recognition, Duo video capabilities and gesture control. With the Hub, you can still take part in Duo calls, but, obviously, they're just the audio variation.

Again, this is basically the same device, so smart home control is all performed through Home View (accessed through a quick swipe down on the main screen) and all the same connections are available through the Google Home app.

With the added size of the Max, you're also going to be receiving better sound performance. We've only had a demo of the device, but the stereo speakers do provide an upgrade on the Nest Hub. It uses a 2:1 configuration, with two 10W tweeters on the front and a 30W woofer on the back - that far outweighs the 'full-range speaker' (as Google describes it) on the Nest Hub.

When the Google Home Hub was re-stickered as the Google Nest Hub, it was also given a new price - dropping from $149 to $129. It's available to buy now, and is by far the cheapest smart display you can pick up from your home - unless you class alarm clocks as smart displays, in which case, well, don't.

The Hub Max, on the other hand, will be $229 when it launches this summer. That puts it around the same mark as other members of the Google Smart Displays line, as well as the Amazon Echo Show, which is $229.99.

If you don't have any concerns regarding the inclusion of the camera in the Max, and you don't mind spending the extra $100, this is the better smart display out of the two. The size difference shouldn't make a huge difference to your kitchen, shelf or wherever you're planning to place it, and the sound performance and slightly bulkier feature set make it the more elite option of the pair.

Still, if you're just looking to get started in the smart home and like the idea of a smart display, there really is no better (and more affordable) choice than the Nest Hub.