What 20th century designers thought smart homes would look like 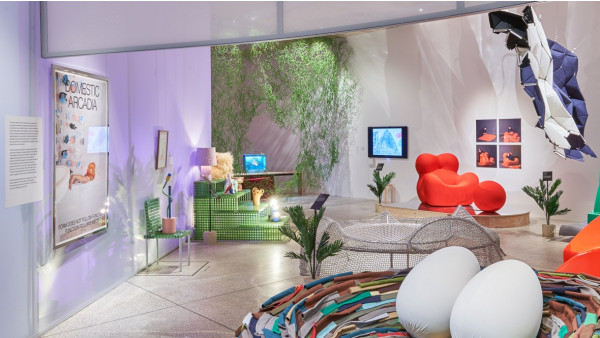 Now that robot vacuums are a reality, it's fun to look back at the autonomous, radio-controlled vac in the RCA Whirlpool Miracle Kitchen, exhibited in Moscow in 1959. Even more fun, though, is taking a look at the home ideas and visions that didn't stick, including some that were never meant to.

That's what the Design Museum's new Home Futures exhibition, curated by Eszter Steierhoffer, is built to explore - what happened to those "radical domestic visions of the 20th century"? The six themes that tie the historical prototypes with modern day home objects on display are living smart, living on the move, living autonomously, living with less, living with others and domestic arcadia.

Read this: Smart home visions through the ages - the history of home automation

And as Ikea's statement says in the first room of the exhibition - Ikea is a partner - "you will encounter many projects that have been realised, but just as many experiments that never went into production. We feel for their creators, who pushed the boundaries to create something new and life-changing."

With a 1962 clip from The Jetsons, Space10's One Shared House research on co-living spaces, and Kiki van Eijk's lovely Google Home-starring Softwear tapestries, there's a lot for smart home fans to see here. We've picked out a few of our favourite retro future visions on show at Home Futures and compared how they stack up to the state of the smart home in 2018.

Ugo La Pietra's Telematic House was created for the Milan Design Fair in 1983, featuring TV screens in every room of the house. Two individual screens in the bedroom with axonometric drawings depict airplane-style rows of seats with screens on the back.

If you'd have asked us 12 months ago, we'd have said the Telematic House was going out of vogue with invisible, screen-less voice assistants like Alexa. But lo and behold, smart displays like the Amazon Echo Show and Google Home Hub - ideally one per room - are the new form of AI interaction in the home.

The Ikea catalogue of the future

As part of Home Futures, you can pick up a fictional Ikea catalogue of the future - "now with Holotype!" - created by Mobile Life, the Near Future Laboratory and Boris Design Studio in 2015. Featured products include the Nostalgi sofa which has colour and patterns that change in real time to suit your mood - LG and Natuzzi's Colosseo smart sofa announced in October isn't that far off.

Also in the catalogue, the smart Rumla mattress, Avkopplad anti-screen canopy and the Liv shampoo and conditioner that "grow themselves" via biosynthesis, the natural conclusion to Amazon Dash self-replenishment.

The Nyfiken smart bookshelf with digital and analogue items delivered straight to the shelves, in some cases by Ikea staff. Again, companies like Amazon and August are already experimenting with smart lock and security systems that can let couriers into your home when you're not there.

Gary Chang's Domestic Transformer video from 2009 takes Korben Dallas' transforming flat and shows how it could work in a real 32 sqm apartment complete with a remote-controlled movie screen that doubles as curtains and sliding walls and compartments galore. In total, it can be configured into 24 different rooms.

Fast forward to 2018 and Ori's robotic furniture, that includes a retractable bed, desk and dresser, is doing a similar thing for today's city dwellers. Other iconic space-saving ideas on show in the exhibition include Joe Colombo's Total Furnishing Unit from 1972.

If Alexa or Google Assistant has ever started responding to something playing on your smart TV you'll appreciate Jacques Tati's Villa Arpel from his 1958 film Mon Oncle. Acting as a warning against irritating tech clutter, the appliances and gadgets in Villa Arpel end up being so noisy, the home becomes impossible to live in.

This kind of consideration might be funny to watch now but it'll become more important as our connected tech talks to each other more and more and doesn't require manual input from humans to run the household.

AIs that become their owners

Superflux's 2017 project Our Friends Electric consists of a concept video and design prototypes for a series of quirky looking smart speakers that have much more emotional intelligence than our current assistants. Eddy asks questions, Sig is a good conversationalist but it's Karma that we found the most interesting.

The speaker, which looks like a vintage radio, has five dials for metrics including 'Politeness' and 'Confidence' - in a complaint phone call, these are turned up and down as the AI acts on the user's behalf. We reckon Google Duplex, which can already call up and book restaurant reservations on our behalf, can't be that far off what Superflux is proposing. But do we want it to?

You can visit the Home Futures exhibition at the Design Museum, London until 24 March 2019 and after that, it transfers to the Ikea Museum in Almhult, Sweden in the spring. If you're interested in the design thinking that impacts why we live in our homes the way we do in 2018, it's well worth a visit.