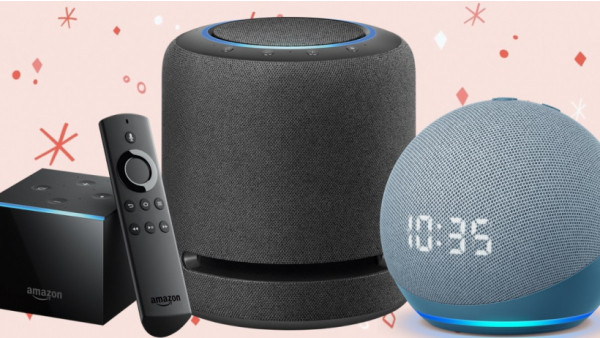 Black Friday week is here and, while we're still a few days away for the big shopping day, Amazon always goes early with its big discounts.

And, Black Friday 2020 is no exception: the official Black Friday Weekevent is now in full swing and there are some amazing discounts for the latest Amazon devices included; all of the newest Echo smart speakers - Echo 4th-gen, Echo Dot 4th-gen, Echo Show 5, Echo Show 8 and more have already seen their prices slashed.

Read on for the latest information of what Alexa and Echo deals are live already, and what ones are expected to go live soon.

We'll be keeping this page updated with the freshest deals and discounts over the next few weeks, so be sure to bookmark it so as you don't miss out on a great opportunity to expand your Alexa smart home.

As mentioned, Amazon has already revealed the big price-cuts on the latest Echo devices such as the Echo 4th-gen and 2020 Echo Dot and we kick off our deals roundup with an absolute doozy.

The reason that Amazon wants to bundle Hue bulbs in with its latest smart speaker is that the Echo 2020 model packs in a Zigbee hub - meaning you can control Hue bulbs without needing a Hue Bridge.

As well as that great offer, there are also price-cuts across the Amazon Echo board, making it cheaper than ever to get Alexa into your smart home...

Amazon recently updated its Echo Dot with a new version.

It has the same 1.6-inch speaker as its predecessor (albeit with some front-firing power thanks to that rounded shape), and remains one of the best and cheapest ways to get in on the smart home speaker world. Especially with these price-reductions...

There's also the powerful Echo Studio to consider. If you're after the best sounding Echo smart speaker than the Studio is by far your best choice.

There's a new Echo Show 10 in town, but we won't see savings here as it's not even on sale yet.

However, the old Echo Show models are all available with discounts.

Let's not forget that Alexa has invaded a number of other smart speakers, from the likes of the Sonos One to the Polk Command Bar and Sonos Beam.

There are a number of options out there in the world of third-party Alexa speakers. Sonos has historically had big discounts during Black Friday of around $50, so look out for those.

There's a growing legion of smart home devices and Echo accessories. These range from things like the Amazon Smart Plug to the Echo Link, Loop, Flex, Buds, Auto, Frames and Sub.

Some of these devices are new, but Amazon has not shied away from offering discounts on its own devices in an effort to get them in as many homes as possible.

Fire Tablets are also massively discounted for Black Friday, as are Kindles.

And, don't forget the absolute plethora of smart home brands that Amazon owns now. We can expect to see big savings across the board on things like...

As mentioned, we'll be keeping this Black Friday deals hub updated and refreshed throughout November and into December.

Bookmark it now to guarantee you don't miss a deal. Be sure to check Amazon's Holiday Deals page on the regular as well.

And check out the latest Sonos speaker Black Friday deals, as well.