What comes after Wi-Fi? Li-Fi beams the internet from your lights to your tech 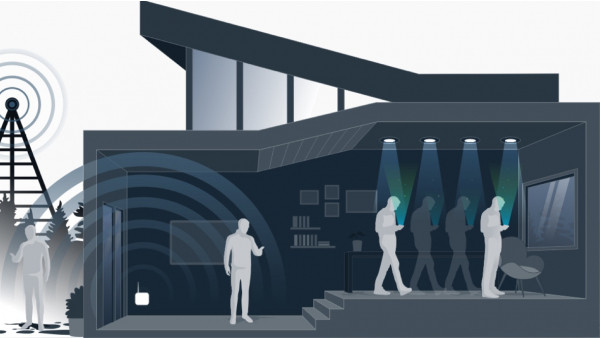 You know the feeling. Your Wi-Fi connection goes all shaky and suddenly your smart home feels rather dumb. It's right up there with the top smart home fails and all manner of mesh devices and beacons are popping up to help us out.

Some clever people, though, have been thinking about what could replace Wi-Fi for nearly two decades. One of these is Harald Haas, co-founder and chief scientific officer of Edinburgh-based PureLiFi, which has been showing off a mobile phone case and laptop connected to Li-Fi lights over in Barcelona at MWC.

Haas began working on this technology 16 years ago, and while PureLiFi isn't the only company demonstrating how Li-Fi can be used, he's the guy who coined the term.

Read this: The best smart lights for your home

So just what is it? Li-Fi is essentially light powered Wi-Fi. It allows wireless communication of data between LED lights and any tech with an integrated infrared receiver/dongle, and it works both ways ŌĆō gadgets can also transmit info back to an infrared receiver embedded in Li-Fi lighting. If your tech is within three to five metres of a Li-Fi light, it can connect to the internet and it could be up to 100 times faster too.

The likes of PureLiFi have been working to miniaturise the tech needed, from a brick sized device to a small USB dongle that can be embedded into tablets, laptops and smart appliances.

Under the bright PureLiFi lights of the company's MWC stand, we asked Haas how this tech will change the smart home and beyond and why we should get excited about it.

There's no fighting over connections

PureLiFi talks about the "spectrum crunch" ŌĆō you'll know it if you go to a big conference and no-one can get onto the Wi-Fi network. So one big plus here is that each Li-Fi access point doesn't interfere with the others. "If IŌĆÖm at home and my son plays on the Xbox," says Haas, "thereŌĆÖs hardly any capacity around the other rooms, that contention is not there in Li-Fi. More bandwidth which is free and unregulated, that is the main advantage.

"ItŌĆÖs the huge bandwidth problem we have. Unlocking full connectivity is basically our entire vision and not only that ŌĆō light covers a certain area. ThatŌĆÖs why you can have in a certain space, many lights covering a certain area and thereŌĆÖs no contention of signals between two spaces. I will be served by this light but what I'm doing wonŌĆÖt take away capacity."

Right now PureLiFi has around 60 pilot projects in industries where an alternative to Wi-Fi is useful ŌĆō hospitals, petro-chemical plants, Li-Fi can even work underwater. One biggie is defence.

"We have enterprise and industrial projects as well as projects in defence because light doesnŌĆÖt go through walls so you canŌĆÖt eavesdrop on anyone on Li-Fi," says Haas. "ThatŌĆÖs a huge advantage for Li-Fi."

It's perfect for smart city streets

When you start to think that any lighting could double as your connection to the internet, Haas points out that lighting companies are now getting on board with the standardisation process of Li-Fi, seeing this as a big opportunity to redefine what lights can provide us. That also extends out into the streets of future smart cities.

"Think about car headlights, car tail-lights, they are all LEDs," says Haas. "You could have cars that communicate to each other or to the street lights or the traffic lights. You could have every street light providing not only illumination but also high speed data connectivity."

It's coming in two to three years

That's how long Haas thinks it will take before we start to see Li-Fi built into smart home tech, aside from PureLiFi and its rivals' reference designs. As he points out, without connectivity we might not get to the future smart home we want.

"For the smart home, imagine ŌĆō you put it into your kettle which has an LED indicator light," he says. "You use the same light over a distance of 10 metres to send one gigabit, with the same indicator light. Imagine you could do predictive analysis, the kettle ŌĆō with AI embedded ŌĆō could realise that maybe in two weeks time, IŌĆÖm going to break, it could then order itself on Amazon without human interaction. The whole premise is saving us time, thatŌĆÖs what weŌĆÖre heading towards but we need connectivity otherwise it doesnŌĆÖt work."