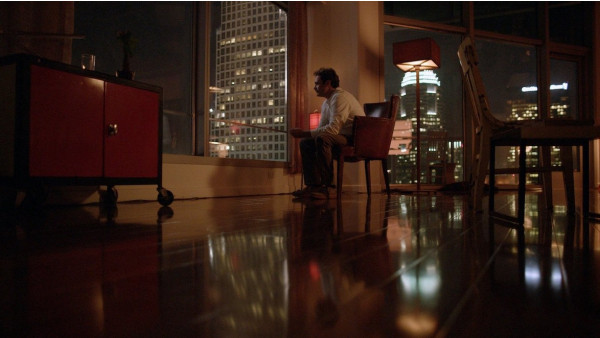 Far fetched, high concept gadgets in movies and TV shows are one thing. But which fictional smart homes, mansions and apartments do we dream of actually living in?

The living, breathing, ultra intelligent smart home isn't quite a reality yet ŌĆō despite the best efforts of visionaries past ŌĆō but that hasn't stopped science fiction and superhero movie makers from setting the action in stunning connected homes that would make Elon envious.

From robot servants (usually feminised, sigh) to scene screen window blinds, consider the following examples as inspiration and instructions for your next DIY home tech project.

We want. To live. In this apartment. Or at least house-sit for a while. There's the usual automatic, motion sensing lights when Theodore gets home to his building in a near future LA/Shanghai. But what's really appealing is the lack of screens ŌĆō Samantha, his 'OS', is set up on the iMac style desktop on his desk but she talks to him through a inconspicuous smart earbud.

Theodore kicks back with a projected VR/AR game that tracks his hand gestures, lets him chat naturally to the sweary in-game character and pulls up images of his upcoming date overlaid over his swanky future-retro furniture. Samantha and his animated, in-game pal even start to bicker. Oh and Twombly's pastel coloured office is just as swoon-worthy. We salute you, Spike Jonze.

A cross between The Fifth Element and Her vibes, the Blade Runner sequel ŌĆō set in yes, 2049 ŌĆō gives its hero Officer K an industrial retro aesthetic mashed up with suitably futuristic person/motion sensing lights and shower.

The star of the show, though, is Joi ŌĆō a holographic AI companion who tells her owner whatever he or she wants to hear. Joi works via a control console on the wall and what looks like a moving projector on the ceiling (plus a portable one for outside chats). She can also light e-cigarettes with her finger and 'cook' up K's boring food into a lush dinner. Everyone wants a wife! And a digital one seems nice when the people on the stairs are such meanies.

There's a lot of tech to love in Iron Man ŌĆō hands up how many people want Tony Stark's glowing 3D hologram models of buildings and elements to be real ŌĆō but some of the best nods to future smart homes are the simplest.

Like this alarm clock sequence in which Jarvis elegantly wakes up one of Stark's 'friends' with a swift opening of the blinds, an audio report including surf conditions and see-through screens covering every inch of window showing the weather and other essential morning info. Echo Spot needs to pay attention ŌĆō we're not waking up for anything less than this.

Read this: The smart mirror ŌĆō can our reflection save us from internet distraction?

The McFly house (Back to the Future II)

At the click of a button, Nathan (Oscar Isaac) puts on Get Down Saturday Night and shakes his ass with his maid Kyoto in front of a wall of synchronised, coloured lights. It's epic ŌĆō just watch it. Fun fact: you can actually stay in the building used in the movie, it's a hotel in the Valldal valley, Norway.

We can't wait for 2063. Sure, we can already buy plenty of Jetsons smart home tech ŌĆō flatscreen TVs, robot vacuums, video conferencing. But we want a toast/record/husband ejector, space boots to walk on the ceilings, living room travelators, robot toothbrushes and most of all, that food-o-matic machine. A sassy Android servant would be handy too.

Still, as early as episode 1 we get a taste of what could happen when the smart home has teething problems ŌĆō placing an order for cooked food and music coming out of the garbage disposal, say. Then there's the future injuries ŌĆō when you're pushing buttons to wash, iron and cook all day, you can't forget your morning push button finger exercises.

In Luc Besson's The Fifth Element, taxi driver Korben Dallas squeezes an automatic pull-out bed, a cigarette machine that tells him to quit, lights and music that wake up when he does, a moving shower/fridge compartment, coffee machine and a button-based control panel into his tiny, modular South Brooklyn 'studio'. Seriously, Ikea's got nothing on this tech space-saving.

Way back in 1999 Disney made a TV movie about a smart house and, well, the house was pretty incredible. It featured an ever-present AI named Pat that took care of all your needs, including dietary. It could sense what bad food you ate and what kind of food you'd need, and give you the food that would make you the most healthy.

If you're hungry, all you have to do is ask Pat for something and she'll deliver. Strawberry smoothie? No problem. Now if only Alexa could make our smart home dreams come true.

The Sandin household (The Purge)

OK, so maybe this doesn't turn out all that well in the movie, but you can't deny that the smart security chops in the home in The Purge are pretty cool. You can see what's happening outside and inside, and you can easily arm and disarm the home with a touch of a button.

You can also use your tablet to watch your streams and transfer content to and from your big TV monitors. And, well, The Purge also serves as a reminder that there are still problems with smart security systems. Namely, humans.

He might not be into Wi-Fi but what Wallace understands about making life that little bit easier via nifty home inventions is that what we really want from robots ŌĆō or contraptions ŌĆō is for them to fetch stuff for us, to actually do things for us, not just chat.

Whether it's the Tellyscope that physically pushes the TV power button towards his finger or Wallace's famous Techno Trousers, it's all good fun but our absolute fave is the Snoozatron complete with mechanical arms to put hot water bottles and teddies in place. Sometimes it's good to show your working.