On-the-go security: Nomad gives any home you're in a smart security system

Take your smart security system wherever you go 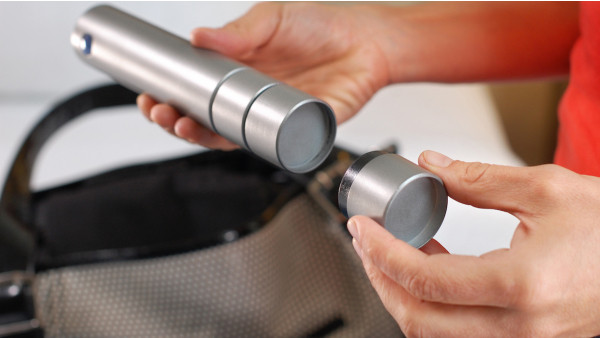 Security systems were arguably the smartest parts of our homes for a long time. They could tell when someone was breaking in, they could record movement, they could alert 24/7 monitoring centres and set off alarms that woke you, and your neighbours, up.

In the modern world of smart homes, however, they feel archaic. Companies like Nest are looking to update the system for the year 2018, making them more affordable and easier to install and manage. But that doesn't really help you if you've got a smaller place, or you're a traveller who finds yourself booking Airbnbs on the regular. That's where Nomad, available on crowdfunding site CrowdSupply for $249, comes in, a startup that's promising a modular smart security system.

Gregg Bieser, founder and CEO, tells The Ambient that part of the goal of the device is to create a security system that's both independent from everything yet entirely flexible. The Nomad isn't reliant on either your smartphone or Wi-Fi connection, so there's no need to get everyone in your home or travelling party to download and log into the same app. If your power goes off, you won't have to worry about your security system going down either.

It ain't easy being independent

Nomad is designed to be mobile, and being mobile means you need to be able to deploy a security system as quick as possible. To start up Nomad, all you have to do is unstack it. Nomad looks like some kind of baton, with a base station that runs on power and individual pods that run on watch batteries (which only need replacing after a year). You simply unstack them and set your pods around the room and boom, you're good to go.

Adding pods to your system is simple, too. Nomad uses a voice interface, but it's not your average Alexa or Google Assistant system, it's more old school than that. It's like a touch tone system on the phone. Those can be pretty annoying, but we got a chance to check it out in action and it actually worked far faster than we expected.

You simply listen for Nomad's commands and tap the touch pad when you find what you need. You also tap that touch pad when you're looking to arm the system. So, why would they go with a touch tone-like system when technology has advanced so far past that? It's all about convenience, according to Bieser.

"When [we] originally created the device, I was looking for a way to create an interface that didn't require a screen," he says. "Everything has a screen. Tiny screens are a pain. It has to be tiny here. But, I also wanted the device to be able to be used by people who aren't necessarily wanting to be working on their smartphone."

Bieser pointed to a law enforcement context, where a police offer needs to set up a perimeter very quickly. Officers wouldn't want to fiddle with a smartphone or use complex voice commands in a potentially noisy area to lay a smart perimeter out. They would want it to be much simpler and much quicker.

He points out he doesn't want to knock the smartphone ŌĆō that's how the modern world works, after all ŌĆō but he and his team did want something that was absurdly simple to work with. "Our bushido includes elegance in form and function," he explains. "Simplicity at every level."

Nomad backed this up with user research in which they asked what users wanted from mobile devices they could use when they travelled. They found that people didn't want another thing to deal with, another thing to charge and keep track of. People are often more reliant on their smartphones when they're traveling, and are apparently then less likely to want to deal with things also reliant on them, according to Nomad's findings. Thus, an independent system made sense.

If one pillar of Nomad is independence, the other pillar is flexibility. That's where the pods come in. You'll get the familiar motion pod, which will detect motion within about 15 feet. But you'll also get vibration pods, which you can stick on doors and other things and get notified when they move.

There's a light pod, which you can place in a dark environment like a closet. So when someone opens up the closet, the light hits the pod and you're alerted that there's been movement. It could also perhaps pick up light from a flashlight of a potential robber.

The smoke pod does what you think it does, while the air pod can detect air quality and humidity, so if someone smashes a window it can detect that the environment of the room changes. There's even a radiation pod.

These pods aren't all included with each Nomad, you'll have to buy them separately, which makes sense because you'll have to put some thought into how you want to protect your space. "One has to kind of set one's mind to think a little bit about where these things can be used and how you decide your mix should be," Bieser says.

If you're a traveller who spends their time in hotel rooms, for instance, you might only need the vibration pod and motion pod. The base station comes with an HD camera that'll record anything that comes in the way, and it also creates a network for all of the pods to work together, so you won't have to worry about video.

Love camping? You can set up your system to place a couple motion pods around your tents, and then place a smoke pod near your fire so you make sure it's out while you're sleeping (only you can prevent forest fires, of course). You can even put it on your boat if you decide to sleep out on the lake. Just toss two vibration pods on your yacht and when the weather gets a little too rough an alarm will go off and wake you up.

Those are only some of the combinations possible with Nomad's modularity, and there's no telling how many of these protection possibilities are out there because everyone's situation is slightly different. However, it is a bit ironic that a system aiming for such simplicity requires its users to think ahead about how they could potentially use the device.

In our brief hands-on time with Nomad, we came away impressed with the possibilities. The system works as advertised. We were able to witness it quickly and simply getting set up as well as test how sensitive its vibration and motion sensors are (you'll definitely feel safe at night). Further, the video quality from the base station was surprisingly good, and offered little lag.

The base package of the Nomad comes with a base station and two pods, plus six months of free LTE coverage. It's not clear yet how much LTE will cost after those six months, and it's also not clear how much individual pods will cost. Bieser says the company is looking to ship out the units to excited early adopters through crowdfunding first, and then seeing how they respond to it and making potential adjustments if needed.

It's clear Nomad has a goal and a vision for how security doesn't just have to be limited to your home, and how it's possible to take it with you in a variety of scenarios that non-homeowners might find themselves in. Should crowdfunding be successful, the company is looking to release in late 2018, and it'll be interesting to see whether other people join the tribe.