Philips Hue Play review: Great gaming, but I wish it was better for Netflix

Still, you don't need Sync to enjoy these light bars 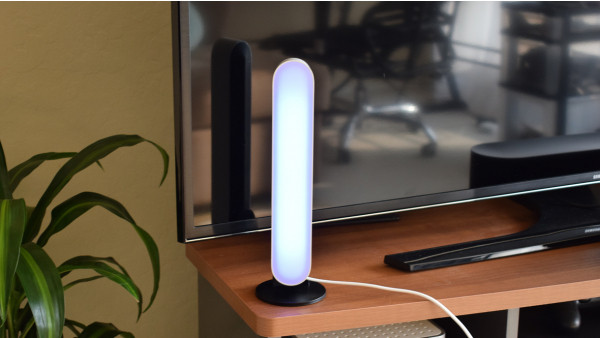 Just when I thought Philips Hue had conquered my home in 2018, along come the Hue Play smart lights to splatter my living room with yet more ambience. The Hue Play light bars arrive alongside the Signe floor lamps, both of which are meant to create more of an atmosphere around your entertainment area.

The nine-inch Play bars can be laid flat, stood upright or affixed to the back of your TV, and will splash colour onto any wall they're facing. At 530 lumens each, the bars are pretty bright, but unlike the Signe lamp, they look best when out of sight, behind your TV or PC monitor, to give them an ethereal glow. Or at least I think so.

Right out the gate it's worth saying that Hue Play is only going to be right for some people. t's by no means as universally useful as the standard Philips Hue bulbs, the new Philips Hue Bluetooth or the super-stylish Hue filament bulbs.

The Hue Play works with Hue Sync, the company's entertainment app that syncs your Hue lights with what's happening on the screen. Because of this, Play is great for PC gamers who can have the Play lights transition in tandem with the action.

Do more with Philips Hue

But what about movies and TV? This is where things get more complicated. The Hue Sync app is still PC and Mac-only, meaning you can't directly hook up your Hue lights to your smart TV or games console. It will work with mirroring services such as Chromecast and AirPlay, but otherwise you're going to need to either connect your laptop to the big screen via HDMI, or download one of the handful of Hue apps available for iOS and Android that use your smartphone camera to watch what's happening on the TV screen and relay it to Sync in real time.

Read this: A guide to syncing your movies, games and music with Hue Sync

YeahŌĆ” it's a bit messy. The alternative is to just use the Play lights to create some ambient but unchanging lighting around your TV. And that's cool too; I've been doing it a lot.

Though I'm not much of a PC gamer, I have tried using the Hue Play with Sync on a few occasions. For times I'm streaming Spotify from my laptop, the ability to sync the Play bars with my music is pretty cool. I also connected my laptop to the TV to try watching a movie with the Play bars, an experience I'll file under "cool but inessential". What I like about Sync is that you can select how much you want Hue to respond to the action ŌĆō a scale of aggression from "subtle" to "intense".

I wish I could sync them up with Netflix directly from my TV or PS4, but I find myself still using Play to create a fixed light around my TV even when it's not in Sync mode. In fact, my biggest surprise with the Hue Play has been just how much I like using these light bars to simply create some ambience.

And remember that other Hue lights also work with Sync, so you need to think carefully about whether a light bar is something you'll find use for in your home. Especially as they're $70 a pop, or $130 for a pair (you can connect up to three Play bars to one of the plugs, which helpfully saves some space).

But if you are a PC gamer, or just fancy some new ways to create a little ambience in your home, the Play is a versatile light bar. I just hope that Philips is working on a way to get Hue Sync working with TVs, streaming services and consoles in a simple way. The day it does, that price tag will feel a lot more justifiable.