Ring Alarm v SimpliSafe: Which is the smartest security system? 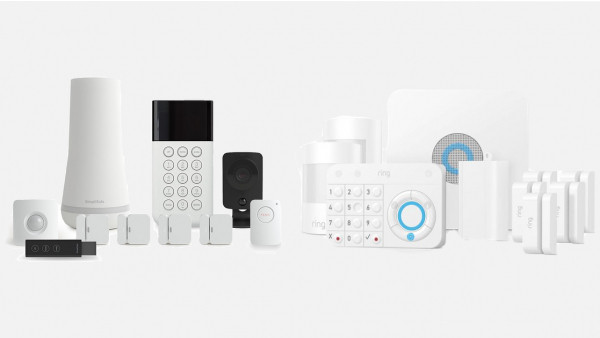 By and large, people put smart home devices in their home for convenience, saving energy, and security. It's the last of those that is fast becoming the most popular reason to get connected tech.

Having cameras you can hook up wirelessly and check in on while youŌĆÖre gone, doors you can lock and unlock remotely, and a smart security system that pings you on your smartphone when thereŌĆÖs a problem, is definitely worth shelling out some cash for.

Smart home security systems are also popular because they are much more affordable than home security has traditionally been. Instead of long-term contracts and expensive hardware, you get user-friendly apps and professional-monitoring for a fraction of what it used to cost. (Although you will have to do all the setup yourself, but that means no strange people drilling holes in your walls, so - bonus, really).

But how to choose the best system? Here we pit two of the most popular ones against each other SimpliSafe - the longstanding king of DIY smart home security, and Ring Alarm - a newer entry and upstart challenger with the weight of Amazon behind it. Below we weigh up the pros and cons of these system to help you choose the best option for your home.

Ring and SimpliSafe are very similar in both design and installation. They each have a base station, keypad, contact sensors, and a motion sensor as part of the entry-level package. RingŌĆÖs devices are all white however, whereas SimpliSafe has some matt black options that might be a better fit in your home. SimpliSafeŌĆÖs devices are also a little more stylish - slimline and smaller than Ring's, so weŌĆÖll give the slight edge to SimpliSafe on the design front.

Read this: SimpliSafe: The missing manual

Installation is again a lot alike. Both systems are wireless so you can just peel and stick where you need your sensors to go, both also offer hardware for installing the devices - screws and mounting brackets - which are a better option if youŌĆÖre going to be in your place long-term.

The differences emerge in the setup. With SimpliSafe itŌĆÖs all done on the devices - you donŌĆÖt even need the app. The SimpliSafe base station talks you through everything in a nice, soothing voice. First, you'll activate the base station. Then you'll activate the keypad, which becomes your controller for setting up the system. After that come all the sensors. You pull the tab and then press the test button to sync things up with the rest of your SimpliSafe devices.

Ring installation is also super simple. ItŌĆÖs all done through the app, and once youŌĆÖve paired the base station all the devices that come in the kit pair themselves as soon as you power them on. SimpliSafe's app-free installation might make some less tech-savvy users feel more comfortable, but the end result it much the same.

Both SimpliSafe and Ring have a plethora of ways you can activate the system - use Alexa or Google Assistant, use the app, or use the keypad. A keypad is a key addition - while using the smart assistants and smartphone is cool, the keypad is versatile as it allows everyone in your home to use the system without having to download apps or talk to an assistant. The main difference here is that SimpliSafe comes with a key fob you can use to arm and disarm, whereas Ring doesnŌĆÖt come with one and you canŌĆÖt buy one separately, either. This is a big minus for Ring.

The systems each have Home and Away modes - where monitoring is enabled, and a Disarmed or Off mode, which means you wonŌĆÖt trigger the alarm if you trip a sensor. But you can still have your door sensors emit a chime when they open or close - a nice feature. For each you can add more devices to your system a la carte, by purchasing them from the companyŌĆÖs websites. Pricing is similar for each, but where things diverge is with video and cameras.

While RingŌĆÖs starter kit doesnŌĆÖt come with one, the while system is very much based around the idea that you own one or more Ring cameras. You can certainly use it without one, but Ring is a camera company, and, if you have one of its video doorbells, floodlight or spotlight cameras they appear front and center in the app.

However, there isnŌĆÖt a lot of direct integration. The cameras donŌĆÖt start recording when you turn the system on and stop when you turn it off, and the monitoring service has no access to the video feed so canŌĆÖt provide video verification to emergency services.

SimpliSafe does offers video alarm verification, if you buy SimpliSafe's smart cam, SimpliCam and opt for the higher, $24.99 monthly monitoring tier. ItŌĆÖs an op-in feature that allows SimpliSafe's monitoring team to tap into your video feeds when an alarm is triggered. SimpliSafe can then give the cops a live description of whatever incident is happening, or not call them if itŌĆÖs a false alarm.

SimpliCam also has person detection, so it can tell the difference between a human and a cat, another feature Ring doesnŌĆÖt have. If you live in an area where police or fire require visual verification before theyŌĆÖll come out, SimpliSafe will be a better option. However, Ring has outdoor cameras and SimpliSafe doesnŌĆÖt, but it does have a video doorbell.

Using RingŌĆÖs app is much nicer experience than SimpliSafeŌĆÖs, which is a little slow and buggy, but a lack of any automatic arming and disarming features with Ring is a disappointment. Compared to SimpliSafeŌĆÖs app however, Ring wins hand down because you can still use it even if you donŌĆÖt subscribe to professional monitoring, not an option with SimpliSafe - you have to pay $24.99 a month for monitoring and access to remote control through the app, so you canŌĆÖt self-monitor even if you wanted to.

Read this: Getting started with Ring

Another great feature of Ring Alarm is that itŌĆÖs based on a Z-Wave system, rather than a proprietary communication system like SimpliSafe. This means you can pair it was a pretty wide variety of smart home devices through the Works With Ring program. In contrast, SimpliSafeŌĆÖs smart home integrations are quite limited, although as we mentioned it does have its own video doorbell and a new lock is coming soon.

Ring also has better Alexa integration, which will likely improve over time. It's the only security system that integrates with AlexaŌĆÖs Guard feature ŌĆō which sets all your Echo devices to listen for the sounds of smoke/CO alarms or glass breaking (Ring doesnŌĆÖt have a glass break sensor, SimpliSafe does). Once connected, you can say ŌĆ£Alexa IŌĆÖm leavingŌĆØ and both Ring and Guard will activate.

Annoyingly, you canŌĆÖt add Ring Alarm to an Alexa Routine, which would let you schedule it to arm and disarm at certain times and so on. However, you can use Ring AlarmŌĆÖs sensors with Routines. In fact, the systemŌĆÖs best smart home feature is that if you have a Zigbee-enabled Echo (Echo Plus or Echo Show second-gen), all Ring Alarm's sensors will appear in your Alexa app. Not the case with SimpliSafeŌĆÖs sensors

Ring wins hand down here - for just $10 a month (or $100 a year) you get 24/7 professional monitoring, which includes cellular backup, should your internet connection go down. You also get 60 days of cloud video storage for any and all Ring cameras (these plans vary a little in the UK).

This is hands down the cheapest monitoring plan available today. SimpliSafe has a lower tier, but for remote access you need that $24.99 a month plan. Both cover cellular service so your system will keep working if the power is out. Neither system will work over a landline.

If you are super budget conscious you canŌĆÖt beat RingŌĆÖs $10 a month plan, and the $199 up front for the base-package is significantly less than SimpliSafeŌĆÖs starter kit, which only comes with one door sensor. However, if youŌĆÖre looking to add a lot of cameras, RingŌĆÖs are more expensive to buy than SimpliSafeŌĆÖs, although Ring has a lot more options, including outdoor cameras, which SimpliSafe doesnŌĆÖt have.

Verdict: Which is best for you?

It's razor thin here - both are great systems, both are inexpensive, and both get our stamp of approval, but there are a couple features that will make one work better for you than the other.

If you are really interested in expanding your smart home and want to set up smart home routines as well as have a security system, Ring will work better for you. However, if security is your top concern, and connecting other elements of your home doesn't interest you, SimpliSafe is the best option - as it has all the features you need, even if it's lacking a little on the smart home side. Plus it really lives up to its name - because it's a somewhat closed eco-system it's super simple to use.