The rise of the invisible, statement, art, lifestyle, design TV

There's more than one way to look a picture 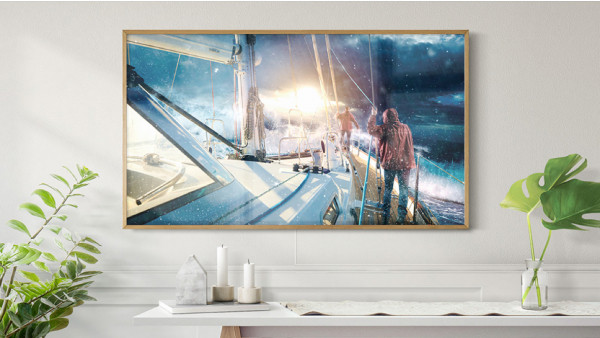 I'm staring at my TV.

It's off. A boring black rectangle with cables of varying thickness trailing down the wall below it. Like an abstract attempt at a jellyfish impression.

It's the dirty secret of home interiors. It's no wonder that style mags never show the black hole of a TV placed in exquisitely designed rooms, as if their occupants never watch Netflix, play consoles or have kids.

But things are changing.

While the best smart TVs are adding streaming options, voice assistants, superior audio and HDR, how they look - especially when they're turned off off - has become an obsession for TV makers. Especially when you can only make picture quality so good.

Design names like Loewe and Bang and Olufsen have been experimenting with the TV form for years - the difference now is that they are being joined by mainstream, big selling tech companies like Samsung and LG. Each has a slightly different take on the relationship between the TV and the room it's entertaining.

Let's start with the obvious. LG's tactic is simply keeping its Signature OLED TV W super slim - specifically 4mm slim. (One of LG's standard 4K TVs is 64mm, for comparison). It does this by housing the TV technology, upward firing speakers and connections in a separate unit, called the LG OLED Hub which sits beneath the ultra-thin display. Now, this does require a cable running between them so you're going to want to run this inside the wall or else risk spoiling the whole effect.

LG's modular Picture on Wall set up, as it's called, has a lot of potential. If you're partial to a sleek soundbar underneath your TV anyway, it could make sense to take the concept further. The Wallpaper TV launched in 2017 and is on sale now - it's not currently super cheap though - specifically $8,000 for 65-inch, $15,000 for 77-inch not cheap.

At CES 2018, LG had a 65-inch rollable TV concept - yes you read that correctly - which can partially disappear into a secret box to change from 16:9 to 21:9 for instance. We'll stick with the Wallpaper.

The current belle of the design TV ball is Samsung's The Frame, by Yves B├®har, which seems, on first impressions, to be the answer to design obsessive's prayers. You can customise the black bezel to a wood, metal or white finish 'frame' which is designed to hang flush to the wall and blend in with regular artwork and accessories. The real trick? When it's not in use, you can switch from TV Mode to Art Mode - move past the pretension here - to display both personal photos and one hundred, free pieces of digital art.

Read our full The Frame review, in which we test the picture quality, Art Mode, ambient light sensor and smart TV features.

Loewe has been building lush TV designs and stands for years now and its latest concept is the Bild X, designed by creative director Bodo Sperlein. Like the LG Wallpaper TV, the Bild X takes the tech away from the display, this time placing everything in a round, stone base attached to the thin metal stand - Loewe is also playing around with hiding cables and components inside a cabinet.

The magic of the Bild X, as far as we're concerned, comes from the way the thin, slightly flexible OLED panel is suspended by magnets in the gold-finish, art deco style frame. Magnetfique.

On sale now, meanwhile, is the minimalist Loewe Bild 9. Sperlein told Dezeen last year that his aim was to "de-geezer" the TV - we think he has succeeded.

I've always had a soft spot for Philips' experiments with Ambilight - LED lights on the back of the TV which shine coloured light on the wall on two, three or four sides - because it brings the movie or game into the room the way no frame or slim design will do. The statement appeal of Philips' 9000 series OLEDs applies more to when you're in the moment, watching TV, than 24/7 but it's appealing nonetheless especially with its Hue Entertainment announcements at CES.

This means you can map out the location of Hue smart light bulbs around the room which can then sync to movies, games or music - demos include Coco and Wonder Woman. As this is PC based for now, we're a ways off Ambilight + Hue Entertainment but you can see where Philips is heading - the whole room reacting to what you see on screen.

Ah, the invisible TV. We've seen a number of transparent TV concepts over the years including Loewe's Invisible 46 way back in 2012. Panasonic has been showing off transparent TVs including an 'intelligent glass' 4K OLED prototype which was demoed displaying animations with two (real) glass pyramids placed behind it to prove its invisibility.

Integrating this type of TV into furniture or appliances have been suggested as potential use cases though it's tricky to see how useful this would be in practice. This whole direction of the statement TV is more of a futuristic, wait and see approach. Still, you've got to admit it's kinda mesmerising.