Bixby is still around, and Samsung's got plans 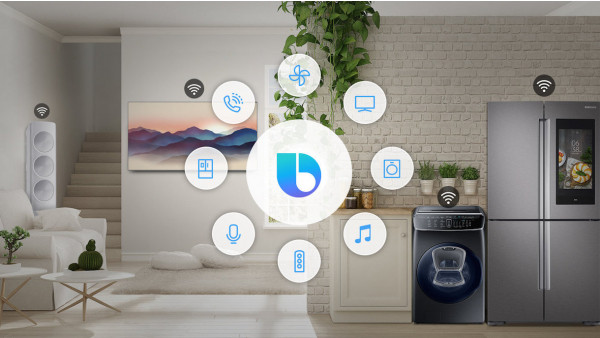 "Bixby isn't the easiest to use," admits Adam Cheyer, CTO of Viv Labs, the developers of Bixby that Samsung bought back in 2016. Indeed, Bixby has been the butt of many jokes, and even Samsung knows it needs work.

But the digital assistant landscape is tough. Alexa and Google Assistant are dominating, and you can't write off Siri either, the default option on Apple's massive arsenal of devices around the world.

Samsung isn't admitting defeat, though. It has big, ambitious plans to fix Bixby. Dag Kittlaus, CEO of Viv Labs, says Samsung has four principles for how to build out the future of Bixby. It wants to make it a singular assistant that's available on every device, powered by every service and personalised for each user.

It's a lot to ask, and it starts with providing a frictionless experience on Samsung's own devices, which means baking it into each and every device or appliance Samsung ships from now on, and doing things like providing a Bixby button, which has frustrated Galaxy phone users. The idea is that if Bixby is a good enough experience being the default assistant on all its devices, that will keep people away from other assistants, like Google Assistant. But first, yeah, it needs to be good.

No friction, no problems

Kittlaus says Bixby will be on a billion devices in a couple of years, and it's selling 500 million Bixby-enabled devices a year around the world. So Samsung's priority is to get people actually using Bixby once they have it in their homes or in their hands. Last year, Samsung said Bixby had 10 million active users. That's a drop in the bucket compared to the 500 million active Siri users and even 145 million active Cortana users (yes, seriously).

There's plenty of room for Bixby's use to grow, and Samsung has so far experimented with a number of ways to get people to use Bixby, from the oddly placed button on Galaxy phones that's easy to accidentally press, to adding gamification features to Bixby and "leveling" users up by giving them reward points when they use it.

There's a reason Samsung is trying so hard to get people to use Bixby. The more people use its assistant, the better it can sell it to developers, which in turn should mean more apps and a bigger, healthier ecosystem. That's the only way for Samsung to achieve its goal of having Bixby be a personalised assistant that can follow you from device to device, not only in your home but also when you're out of it.

That means that Bixby needs to be able to plug into as many services, apps and devices as possible. Samsung is certainly utilising whatever it has in its power to do this. Samsung's SmartThings platform obviously works with Bixby, and the Galaxy Home even doubles as a SmartThings Hub. It's also utilising Harman Kardon, the home and audio equipment company it owns, to bring Bixby into cars.

No one's using the third-party services, we're the first to give you the same tools we use to create services people will use

It's the ability to get third-party apps and services jumping onto Bixby that's the most important. Viv Labs CTO Adam Cheyer says the company knows that everyone has different preferences for things they need to do. Some people use Uber, others use Lyft. Some people like Airbnb, others swear by Booking.com. It needs the developers from those countries to buy into Bixby so that it can host all its services, which then allows Bixby to be fully personalised to individuals.

The idea is to be able to say, "Hi Bixby, I need a ride to get some coffee" and for Bixby to figure out that you mean "book me an Uber to Philz Coffee." Cheyer says Samsung wants to build an AI platform that can scale to an entire marketplace.

He believes the way third-party skills are handled on Alexa and Google Assistant are still rudimentary. You have to say things like, "Alexa, tell iRobot Home to start cleaning" to have something happen. Cheyer says this is a bad user experience because it's making the user do the work. He argues that's why usage numbers on skills and actions are low, and reckons Samsung has the keys to crack it.

"No one's using the third-party services, we're the first to give you the same tools we use to create services people will use," he says. At the same time, Cheyer says Samsung is realistic. It knows that Google Assistant has been around for years and that Alexa has 40,000 skills. But he and Kittlaus also point out that voice assistants are still in the early stages.

"We're in day one now, assistants are a utility not a paradigm yet," Cheyer says. Getting Bixby to work with as many apps and services as possible, and in as many devices as possible, is how it plans on catching up.

Samsung is already working on solutions to the problems it might have if it does eventually catch up. Say there's a home where each member of the family has a Galaxy phone. They also have a Galaxy Home, a Samsung TV, a Samsung refrigerator, a washing machine and more.

If Bixby is highly customised to each user, how does Bixby work in an environment that has both personal devices, like a phone, and shared devices, like a Galaxy Home, without the wrong person getting the wrong information when someone says, "Hi Bixby"?

Kittlaus says the company is building towards having Bixby identify users by voice and other authentication methods to maintain Bixby's future personalisation. In addition, Bixby-enabled devices ŌĆō especially from Samsung ŌĆō will understand how close they are to other Bixby-enabled devices. So if you've got your phone or Galaxy Watch on you and are near the Galaxy Home, Bixby on the Home can tap into your info. If you move away and another member of your household approaches it, that info switches over.

The bigger question is this: If voice assistants are truly to become the next computing paradigm, there need to be ways for developers to build and make money off that computing method. Samsung introduced Capsules at its developer conference, which are basically Bixby's versions of Alexa's skills or Google Assistant's actions. Samsung is planning on adding Premium Capsules and subscriptions in the future, well after Bixby Marketplace, where all the Bixby Capsules will be stored, debuts in early 2019.

It's unclear what Premium Capsules could be, but they would require a payment of some sort to use. Subscriptions would let you subscribe to a Capsule for a set fee each month. Kittlaus says Samsung wants to experiment and see what works, but it also doesn't want to frustrate users. "You don't want to irritate people," he says. "Some people will have screens, others won't. You don't want ads."

It's clear that Samsung has big dreams for the future of Bixby, and it certainly has the devices and resources to continue to invest in it and make it better. Whether it'll actually succeed is far from set in stone, but it'll be exciting to see how it all plays out. Especially if Cheyer's demo is any indication.

Cheyer, a fan of magic, was able to use the new developer tool to incorporate Bixby into his magic routine. He performed a card trick with two volunteers, giving each person 10 cards. He asked the first volunteer to pick a card and remember what it is. He then told Bixby to move the card from one pile to another. When he recounted, the first volunteer had 9 cards and the second had 11. Cheyer then asked Bixby which card it moved, and Bixby was able to show that it moved the 9 of diamonds, which was the correct card.

"What I want to see is whether Alexa or Siri or Google Assistant can do that."