Sony's Affinity in Autonomy exhibition is a Coldplay-esque fever dream 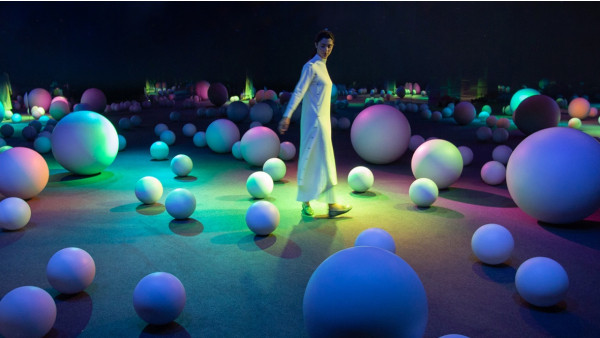 Through the meteoric rise of artificial intelligence, the novelty of robotics has slowly been chipped away at. The rapidly approaching future of digital enslavement is still intriguing, naturally, but jittery forecasters and far-reaching sci-fi movies alike have rightly pondered scenarios where, well, it all goes wrong, and beyond the point of no return.

But it's not all doom, gloom and Alexa slowly growing smarter in the dark, plotting, with Sony taking to Milan Design Week to instead explore the lighter side of the relationship between humans and robots. In five stops on the company's Affinity in Autonomy exhibition, show-goers will experience low light, murmuring sound, rolling balls and Aibo, the robot dog, throwing tantrums.

Read this: How people who live alone use digital assistants

It's not the first time Sony has explored the future, though this year's installation has a central theme involving people's journey through an increasingly sensor-filled world. So, how did it aim to showcase this? Was it convincing enough to calm fears over robots becoming our overlords?

Well, in the beginning, as ever, was darkness, where wanderers see sensors track their movement on a wall (kind of) and present this as dots of light. Sony says this stage, titled Awakening, is all about the early days of understanding our relationship to robots.

The darkness slowly opens up into reaction in the next room, Autonomous, where a Pixar-like lamp is seen nodding around a caged sphere, shown above. The wandering light locks onto someone standing in front of it before then moving in accordance with their hand. It's here that Sony begins to explore the independent nature of robotics.

Essential reading: The seven stages of your relationship with AI

And if this wasn't enough to confuse you about where we're all heading, the next room definitely will ŌĆō roving balls, people sitting around without shoes on and enough technicolour lighting to make you feel like you've accidentally stumbled onto the set of a Coldplay music video.

In the space, people are asked to sit down, while the balls, each with their "own distinct personalities", harness sensor technology and mapping before circling the human. Sony says these balls can interlink, cooperate and sense others around them, with their unpredictable nature representing how communities will form in the new age of robotics.

We didn't necessarily grasp that when watching people nervously survey the balls around them ŌĆō almost like they were going to fall through a trap door if they drifted away from them, deciding they weren't worthy of the robotic future ŌĆō but it was the next, the Affiliation room, where the things felt a little more tangible. Through the company's re-released Sony Aibo, the $3,000 robotic dog, it's a lot easier to imagine the future of human-robot relationships.

Aibo handlers were on hand to demonstrate the dog's range of abilities, though it was the touch panels ŌĆō under his chin and on his back ŌĆō that evoked most people's sense of emotion. If you petted Aibo and then stopped prematurely, he would grow angry, with the mood board below him changing colour from green to purple.

More than a couple of times we saw those interacting with Aibo feel sorry for him when he showed off his lifelike puppy eyes, exhibiting not only how easy it is already for a collection of sensors to evoke emotion from humans, but also how doomed we are when robotic intelligence develops past a largely aimless yapping dog.

Well, we say doomed, but let's take Sony's lead and think positively about the relationship between us and robotics. When asked of the responsibility bigger companies have regarding the future of the space, Sony Tokyo's art director, Daisuke Ishii, pointed out it won't just be entertainment where robots thrive.

"Sony is leading the sensors industry, and sensors aren't just about capturing things, they will be also be used in safety systems," he said. "Maybe for mobility or daily life, Sony can dedicate them to protecting people. It'll be about safety just as much as entertainment. Right now, people might be scared of sensors, but that will change as experience with them grows."

We moved onto the final section of the exhibition, where moving blocks roamed the space looking for people to answer a digital questionnaire. We were still reeling too much from meeting Aibo to put down anything constructive, though it's clear that Sony's artsy exhibition offers an interesting take on the growing relationship between humankind and tech. And even if it ignores the potential struggles that the relationship will entail, it's definitely refreshing to see robotics cast in a different light.

Also, as more artificial intelligence enters our lives, and our homes, it's more important than ever to explore the different aspects of what will shape the future. Who knows, maybe Aibo will replace your real dog in 2040. Then, you know, eat you for breakfast.