Five ways your smart speaker could keep you safe at home

Who needs a bodyguard when you've got an all-seeing voice assistant? 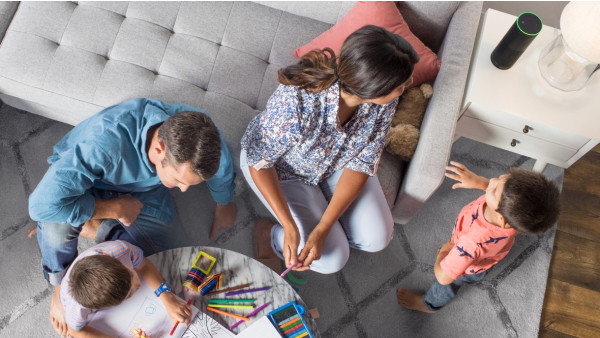 Staying safe at home is one of the main reasons that people say they are buying smart home devices like smart security cameras, video doorbells and connected alarm systems. But staying safe where you live can mean different things to different people.

We run down some of the ways your voice assistant, whether it's on a smart speaker or other piece of kit, can be the centre of your tech keeping you safe at home, as well as take a look at a few features that are currently being trialled, are only possible with hacks and workarounds or that could be coming soon.

Get help when you need it

Keeping you safe at home might be as simple as a device that allows you to check in regularly without needing to have it in your hand. That's where a skill like Ask My Buddy comes in. Available for Alexa, Google Assistant or Cortana, this lets you send a hands-free alert to one person or a whole group of contacts. Ideal for anyone with limited mobility or for getting hold of family in an incident that doesn't quite need an ambulance. The comments are full of heart warming tales of people who love this functionality.

Show you your security camera feeds

Now that smart speakers/displays are getting screens ŌĆō think the Echo Show and Spot as well as the upcoming JBL Link View and Lenovo Smart Display ŌĆō they're more useful when it comes to real time home security.

Depending on your setup, you can view feeds and footage from video doorbells and smart security cameras on your smart speaker/display or smart TV. Just make sure you don't get your ecosystems in a twist ŌĆō the Ring video doorbell works with Echo devices and the Fire TV; Nest Cam and Arlo with Chromecast; SmartThings compatible cameras with Samsung's new smart TVs and so on.

Read next: How to view security camera footage on your Echo devices

PC Rob Flanagan at the Lancashire police in the UK had the clever idea for a 'Latest news from Lancashire police' Alexa skill that could alert locals to current crime situations in the area. And while it's a trial right now, it could catch on around the UK and beyond.

The idea isn't that your speaker blasts scary crime news at you all day ŌĆō that would be too much. Instead it would form part of your morning briefing, and then only when there's an emergency or major incident. If you live in that part of Northern England, just enable the free skill then say "Alexa, what's my Flash Briefing" or "Alexa, what's in the news?"

"Alexa works alongside traditional policing methods to inform the public about the important issues in their neighbourhoods," said PC Flanagan. "We want to be at the forefront of this new technology to make it easier for the public to access the information they want to know."

Beyond individual security cameras and smart locks, we're getting to the stage where you can control your whole smart security system via voice, check on its status and get alerts via your smart speakers.

Google Assistant works with systems from Alarm.com, Vivint, Scout, Abode and ADT Pulse not to mention Nest's new Secure system which from now on will no doubt get the best integrations first. Right now, thanks to a new update, you can check on the status of your Secure system when you're out and about via Google Assistant on mobile and Wear OS plus you can set the alarm if you've forgotten and switch between modes. Alexa meanwhile is compatible with systems including Vivint, Scout, Abode, Honeywell and SimpliSafe.

Alert the emergency services (not yet)

This is the obvious one but we're not quite there yet. For instance, in July 2017 a woman claimed that Alexa called 911 during an alleged gun incident in her home in New Mexico but Amazon has since said that's impossible as Alexa could only call your contacts. But it did lead the internet to pose the question ŌĆō maybe Alexa should be able to call the emergency services?

In another incident in which we're not entirely sure of the set up ŌĆō perhaps a connected smoke alarm and IFTTT or similar ŌĆō a family in Georgia claims that an Echo Dot woke them up saying "Fire, fire" louder and louder. Lauri Jo Bennett credits Alexa with saving her and her husband's lives during the house fire.

Now, there aren't that many smoke alarms with this type of integration built in yet ŌĆō FirstAlert is putting voice assistants in the actual smoke alarm ŌĆō but the Nest Protect can be connected to Google Assistant via IFTTT. Still, as with the emergency calls, we're bound to see more of these types of features coming to smart home devices with voice assistants baked in.