An evening in with Voice Originals' hybrid game When in Rome 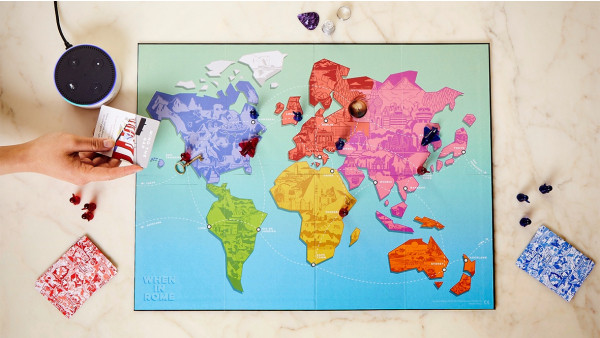 Everyone knows that board game players are rock stars. I mean, I once played an absolutely wild game of Articulate in a campervan in Scotland that nearly tore a friendship group apart. So when there's a way to make things even crazier, it makes sense to jump on it. And no we're not talking about a zany version of Settlers of Catan or making up new rules to Monopoly, we're talking Alexa board games.

Because they're a thing now. Specifically, the first one we've seen, the very intriguing When In Rome travel trivia game from Sensible Object.

Played by two players or two teams (of two to four people each) and recommended for anyone over the age of 13, the $29.99 game uses both a traditional board, pieces and cards set up and also an Alexa skill to play the game ŌĆō you need both throughout or it doesn't work. According to the box, there's 30 hours of gameplay as per the trivia questions. We got some nerds together for an evening in with When In Rome ŌĆō here's how we got on.

The ritual of setting up

The set up of When In Rome reminded me a lot of one Christmas where me and my extended family decided to play a Who Wants To Be A Millionaire? game that involved the TV. It did not end well. It reminded me of that fateful December day in the sense that instead of everyone rustling about to set up everything and get their cards/money/pieces in order ŌĆō and that does happen but there's not much to set up to begin ŌĆō it's one person talking to Alexa and everyone listening for a few minutes.

Read this: Our guide to summer entertaining in the smart home

Board games are so reassuring because they include rituals and one of these is setting up ŌĆō I guess in time, this could become a new ritual and people will learn that they don't have to listen to every word. To get the skill working, saying "Alexa, play When In Rome" worked for us. For some reason saying "enable" didn't ŌĆō even though that's what the tiny booklet in the box says. Weird.

Board wise, you have to unfold the board of a world map ŌĆō woah, the UK looks huge ŌĆō and slot it together. Although almost immediately you have to turn it over to find the 'packing list', which someone has to read out to Alexa. Then turn it back and slot it in again. It's a cute bit but takes ages. Then you just have to get into teams ŌĆō blue and red ŌĆō and then tear into the plastic bag to find the blue and red plastic aeroplanes.

The aim of the game is to answer questions posed by Alexa and Friends, which get you points. The player/team with the most points after nine rounds (or three Souvenirs, hang on) wins. Answering correctly also allows your lil plane to fly around the map ŌĆō only to the 20 cities on there, mind ŌĆō and stick your 'Friends', the little blue and red people, on the cities, which lets you fly further etc.

There are also five Souvenirs to place around the board ŌĆō a button, ring, key, guitar pick, thimble ŌĆō and those get you big points but we'll get to those later. You only place these when Alexa tells you too ŌĆō not at the beginning. And there's also some blue and red Upgrade Cards which are fun but I didn't really know where to put around the board throughout.

Well, we played When In Rome. Nine rounds. And the Blue team won by one point ŌĆō 44 points to 43, nail biter. Looking at the board, we look pretty boring as we didn't really use the Tokyo to San Francisco route properly ŌĆō blue and red stuck to different sides of the map after starting in different cities (Lima and Hong Kong).

So was it fun? Well, yes. There's a lot to like here, a lot of promising stuff for Sensible Object and anyone else trying this. But there's also a lot of stuff that was frustrating and just a bit odd.

Let's start with what we liked. First up, you're not talking to Alexa the whole time ŌĆō which, to be honest, I was worried about. Instead you get 'friends' in each city who pose the questions - they have the right accents for each city (actors?) and give you little tidbits. Then Alexa just jumps in to move things along, give the scores for each round etc. Alexa is a really nifty scorekeeper, it must be said. Plus it plays music while you think.

The game itself is simple but pretty entertaining, especially when you realise you just need to go after the Souvenirs for the big points. When the Blue team got a question wrong in Berlin, where the seven point guitar pick Souvenir was hanging out, things got a lot more spicy let me tell you.

The city-based trivia questions themselves range from easy to "WTF who knows?", but we always found them interesting. The topics, which you can choose between, include slang and language (a fave); arts and culture, history and buildings; sports and games; food and drink and finally, random. And I felt like I was really, genuinely learning stuff, especially about the cities I hadn't actually visited IRL. (Side note: Obviously you can play trivia games on Alexa, like the very popular Jeopardy!, skill without the board game).

The board and pieces are nicely made overall, pretty nostalgic but cutesy ŌĆō the Souvenirs feel a bit weird though and it can get a bit crowded on the cities when you have a plane, a Friend and Souvenir there.

The Upgrade Cards were also very fun, and pro tip, I wished we'd known to use these more ŌĆō we will next time. At certain points, Alexa tells you that you can choose between a low number of points or an Upgrade Card. These include sneaks like the self explanatory Tokyo Teleport and ŌĆō the best one ŌĆō Trash Talk, which when we used it meant the Red team was insulted a bunch of times in Swahili then had to say something along the lines of "Alexa, we suck" in order to continue. Nice touch.

So that's what we liked while playing our first Alexa board game. However, we have a ton of notes on how to make When In Rome faster and friendlier. Here goes.

The biggest criticism I have is that having so much to listen to means the whole vibe is much quieter than usual for a board game. Even when playing as a family and not a bunch of drunk dweebs, board games tend to involve players asking questions or reading cards out; people fighting over deals and swaps and so on. With When In Rome, there was a lot more sitting around listening and unnecessarily looking at the Echo. (I know, I know, it's weird). I also didn't put music on as I wanted Alexa to have the best shot of hearing the answers.

How to solve this? Well, some of the stuff coming out of Alexa's mouth was filler, I've got to say. We don't need "what a round!" every round. Maybe it reduces once you've played more than once but there were also too many "take a moment to think about it" type prompts ŌĆō just go straight to prompts and get Alexa to read out the scores as quickly as possible between rounds. A wisecrack here or there is great but it needs to be, in general, brief. Same goes for the Friends in each city.

In terms of game design, the Head to Head part of each round felt a bit long, though it did come into its own at the end of the game where things got tense. The way the Souvenirs are introduced doesn't allow for too much strategy and it's also not the kind of game that you can glance at the board and get a sense of who is winning, apart from the number of Friends. Fine for adults but tweens/teens may struggle with that.

Speaking of, I said I felt I was learning while playing and at times it did feel like school, albeit more fun school. So I'm curious why this is aged 13+. Some of the woke stats about slums etc might not be appropriate for friendly family time but I think this would be great for slightly younger kids too. It'd also be great to have multiple modes ŌĆō difficult, say, and maybe one for kids.

When In Rome
Buy on Amazon

The trivia questions are multiple choice and you answer "Alexa, it's a, b, c or d". That makes sense but as voice assistants get better it'd be much more satisfying to be able to say the answer in full, e.g. "Alexa, it's the Pharoahs" when asked about football teams in Cairo.

A final slight issue, one I actually thought we'd encounter more. We did have to repeat ourselves a few times, particularly when choosing which topic we wanted to answer questions on. I learned to say the topic name, not the number of points etc but at one point I had to repeat myself three times to get to the question. Surely if you get to three goes, Alexa could pick a topic for you to put you out of your misery?

So plenty of room for improvement. When In Rome is a sweet idea, nicely executed that's actually a bold move into hybrid voice and board games. If you already have an Echo or Alexa speaker at home, it's affordable enough to try out on games night as an alternative to the usual classic crowdpleasers. Let us know in the comments if you do.