Internet of sh*t: Products that made the smart home look stupid

Why do these exist? For your enjoyment, that's why 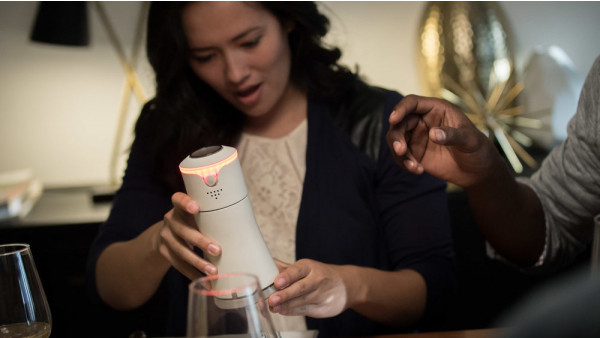 The smart home can make our lives easier in so many ways: automated lights, high-quality music and all-knowing smart assistants. But not every idea is a home run.

There are a whole bunch of smart home products out there that will make you face palm so hard you'll risk a concussion. We can only wonder if we're part of some elaborate trolling experiment, or if there really are people who would buy a $700 juicer that's as effective as using your hands.

We've scoured the internet for the worst smart home products out there ŌĆō the stuff that is worth holding up as an example of what not to do. Without further ado, we present: the not-so-smart home.

Say hello to GenieCan, a gizmo you place in your garbage can to keep track of everything you throw away. Before you chuck it, you scan the barcode and it'll add the item to your list. No worries if it doesn't have a barcode ŌĆō just hold it front of the scanner, wait, and it will attempt to work out what it is.

There's actually a kernel of a good idea here ŌĆō like the Amazon Dash Buttons, it's about reducing friction in re-ordering. Good thing those Dash Buttons areŌĆ” oh yeah, they're dead.

Humans have been boiling water for hundreds of years, but even simple things can be improved* with an internet connection and companion app ŌĆō right?. So goes the thinking at iKettle, the company behind the ŌĆō you guessed it ŌĆō smart kettle.

So what benefits does this bad boy bring you? iKettle sells the biggest feature as ŌĆō get ready for this ŌĆō boiling water from anywhere. Get ready to boil your water from the toilet. Boil it from the office? You betcha.

We're not handing out awards here, but if we were, Juicero might be the worst smart home product ever invented. No, that's not something to be proud of. Juicero was a bit of a status symbol when it was announced: a $700 smart juicer that claimed to use an advanced press that would squeeze all the juice of of packets, which had QR codes you needed to scan before juicing.

It turns out that you could just squeeze the packets with your hand and get the same amount of juice. A juicy microcosm for the bad side of the smart home, then. This pretty much destroyed the company, who soon had to drop the price to $400 before shutting down for good.

Imagine this: You're sitting at the dinner table tucking into some lovely pasta. It just needs a bit of salt. All you've got is a dumb salt shaker. That obviously won't do. What you need, good friend, is a smart salt shaker.

That's what Herb & Body's Smalt is all about. You can press a button ŌĆō or, even better, use gestures (gestures!) to choose between a pinch, shake or pour of salt. It'll dispense it onto a tray, which you can use for your food. Sure, it'll take four times longer than just doing it yourself, but technology. Unfortunately, Smalt didn't meet its crowdfund goal, so we'll never get to try it ourselves ŌĆō shame.

Ah yes, now we're really getting down to it. Another marvel of CES 2019, Kohler's smart toilet comes with built-in speakers, voice controls and cool-ass lights. Alexa controls? When Kohler calls this its "most advanced intelligent toilet" do you even need to ask? (The answer is an emphatic yes).

The egg ŌĆō mankind's greatest mystery. Just look at the egg carton in your fridge. How many eggs do you see? Exactly, no one knows for sure.

Those folks at GE and Quirky thought they'd cracked it with the Egg Minder smart tray. Not only does it send you a smartphone notification telling you how many eggs you have left, it displays a little LED light next to the eggs telling you how old they are. Sadly it looks like the Egg Minder has ceased to exist, despite an admirable run, but you can still pick it up cheap online.

Sofas should be simple ŌĆō just get something comfy and sit on it. Right? WRONG. The Miliboo smart sofa is here to complicate your comfort. See, this sofa has giant vibrators inside, and it'll sync with your entertainment. Rumble away, baby, as your neighbours complain about their ceiling vibrating while you're watching the latest Avengers movie. What do you care what they think? You're better than they are. You have a smart couch.

Obviously you've got Google Assistant built in, wireless charging and LED lights underneath for some rad mood lighting. Let's not even think about how assembling this sucker will make Ikea look like putting together Lego bricks.

Look, we're big fans of Alexa and Alexa gadgets can be fun. But it's time we addressed the gormless fish in the room: no one asked for this. Big Mouth Billy Bass is a novelty with about 30 seconds of appeal even without the connected element. For some reason, the smart home gods decided to bless us with an Alexa-enabled version.

This here is the Aevena Aire, a smart security drone that roams around your home and records video. It's also got Alexa built in so you can command your smart home from your indoor drone, if it hears you as it drifts away. Handy?

Unfortunately, this one was cancelled before it made its way out of the factory, so you won't get to marvel as it bumps around your home in the middle of the night like a giant, stupid Alexa-powered crane fly.

If we said the words, "World's first automated dog toilet", we imagine your next question would be, "How much?" and "Please, I will literally sell my children for this product". We say this because Inubox raised an impressive $40,830 on Kickstarter, proving that there's an appetite out there.

The idea isn't actually all that bad ŌĆō we're really more amused by Newtons Box flexing about building the world's first automated pet toilet, a claim that's a) probably true and b) we definitely won't be verifying.

Don't think it's just about the home. The smart car is a real thing ŌĆō and the internet of sh*t is coming for it. Take licence plates; what should surely be a simple technology: You print numbers on a metal plate and make sure they're legible from a distance. It works. However, some cities ŌĆō like Sacramento, CA ŌĆō are moving toward smart licence plates. These plates are digital, and can be changed.

Why? Do we really want to allow people the ability to switch their licence plate to obnoxious bumper sticker slogans? And what happens if the licence plate malfunctions after an accident? Look at that photo above, you notice anything? That's right ŌĆō it's a licence plate trying to access a server. And here we thought HomeKit was a pain in the ass.

Back in our day, the only time you'd staple some wood to your wall is if you were trying to reinforce it against the living dead. But Mui? Mui isn't your average bit of wood. Oh no ŌĆō with Mui you're getting wood and some absurdly slow scrolling text across it. This is the Internet of Wood ŌĆō and we're all living in it.

Look, we know we said we liked the look of Mui when we first saw it last year, but we're big enough to admit our mistakes. If Mui ever makes it to market, we're happy for it to prove us wrong.

Do you know how to iron? No? Well, allow the Laurastar Smart U to teach you. See, it's a connected iron that works with a companion app. That app will link you to the best ironing tips and tricks, and you'll even get videos teaching you everything you need to know.

If only there were videos, perhaps on a single website, where people do video tutorials for almost anything. Ah well, until then, back to the ironing.

Keyboards ŌĆō they don't do enough, do they? Forget shortcuts and typing, you need something connected. Enter the Das Keyboard 5Q, which comes with a super fancy dial and allows you to set up quick commands for functions for all sorts of websites.

There's nothing more awesome than a connected keyboard for a device that's always connected. We're just waiting for the connected mouse to complement this keyboard. If this wonderfully stupid promo video doesn't sell you, nothing will.