What is the best Amazon Echo for your setup? 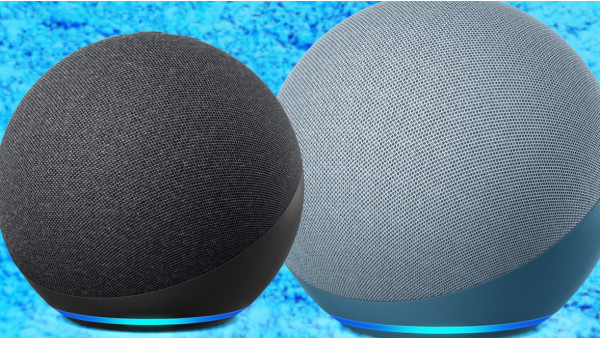 The Ambient is reader-powered. If you click through using links on the site, we may earn an affiliate commission. Learn more
Nicholas Fearn
@nicholasgfearn
Friday

In late 2020, Amazon radically overhauled its range of Echo smart speakers. The fourth-generation Echo and Echo Dot both offer brand new spherical designs and a ton of new features.

While the 2020 Echo is AmazonŌĆÖs flagship smart speaker, the new Echo Dot is Amazon's entry-level offering.

In this article, we compare the Echo 4 and Echo Dot 4 on design, features, sound quality, and pricing to help you choose the Amazon smart speaker that will best suit your needs and budget.

Compared to previous generations, the 2020 Echo has a brand new design. Its form factor is now completely round - with the older tall, squared look out the window. Overall, the fourth-generation model doesnŌĆÖt look as in-your-face as its predecessors, and thatŌĆÖs definitely a good thing.

While the new Echo is rounder, itŌĆÖs still a sizable smart speaker, comparable to a honeydew melon - measuring in at 144 x 133mm.

Amazon has chosen to keep the fabric outer layer that has come to define its newer Echo speakers. But itŌĆÖs decided to remove the plastic top, and thereŌĆÖs now a semi-circular base on the speakerŌĆÖs back.

The round, fabric-covered form-factor of the new Echo definitely makes it more modern. ItŌĆÖll look great in any living room, bedroom, or home office, and is available in three color choices: Glacier White, Charcoal, and Twilight Blue.

When you look at the front of the device, all you see is the fabric covering and an LED ring that sits at the bottom of the device. This used to be located at the top of the speaker and displays the same colors as before: blue when Alexa is listening to a question or command, red when youŌĆÖve muted the speaker, a white light that incrementally completes the LED ring when you turn the volume up or down, and more.

At the top of the speaker, youŌĆÖll see four physical buttons. They consist of volume up, volume down, action, and mute buttons. The power cable also looks different. ItŌĆÖs now white, while the actual plug is thinner and a bit longer.

Just like the larger fourth-generation Echo, the 2020 Echo Dot looks very different. It, too, sports a circular form-factor. While the new Echo Dot is the spitting image of its bigger sibling, itŌĆÖs a lot smaller - it measures in at 100 x 89mm.

Other similarities include four physical buttons at the top of the speaker, a fabric covering, a plastic semi-circular bottom, an identical power port, and a 3.5mm audio jack. The buttons all do the same things: increase and decrease volume, action, and mute.

As we see with the new Echo, the new DotŌĆÖs LED ring has also been removed from the top of the speaker and is now located at the bottom. The LED ring on the new Echo Dot doesnŌĆÖt look as imposing as older models and will be a useful touch if you decide to put the speaker on a table next to your bed.

Although the fourth-generation Echo Dot is just as wide as the previous model, itŌĆÖs actually twice as tall. We were surprised with this change as the Echo Dot has always been marketed as a super small smart speaker.

But itŌĆÖs got a bit bigger and isn't as easy to hide away. Whatever the case, itŌĆÖll still look fabulous in a modern home or office.

As you can expect with any Echo smart speaker, the main feature is AmazonŌĆÖs voice assistant: Alexa. And it really has improved on the fourth-generation Echo as a result of the new AZ1 Neural Edge processor.

Amazon calls its new processor "an all-new silicon module thatŌĆÖs purpose-built for accelerating machine learning applications." What does that mean in simple terms? Well, Alexa is a lot more capable.

Because the processor enables Alexa to perform commands locally, youŌĆÖll experience faster responses to your questions and demands. In fact, if you ask Alexa to set a timer, update your calendar, play music, and much more, youŌĆÖll receive an answer several milliseconds faster.

The new Echo also boasts loads of new smart home abilities. It can now be used as a bridge for the Sidewalk network, making it quicker and cheaper to use a range of connected devices (such as Ring lighting products) because you donŌĆÖt need to purchase and set up an individual bridge.

WhatŌĆÖs more, the fourth-generation Echo 4 can also take the role of a Zigbee bridge. If you were to use it as a Zigbee smart home hub, you'll be able to easily connect devices like smart light bulbs, door locks, connected plugs, motion and contact sensors, and many other products.

ThereŌĆÖs also a built-in temperature sensor, which will enable you to create a climate control routine in your home or office. Other new features include improved sound (weŌĆÖll talk about this shortly) and tap-to-snooze, a function we first saw on the Echo Dot with a Clock.

In terms of new features on the fourth-generation Echo Dot, the biggest ones are a front-firing speaker and touch-to-snooze (which, as weŌĆÖve already mentioned, it is also included on the 2020 Echo.)

If you put the new Echo Dot on your bedside table and set an alarm to wake you up in the morning, you can snooze it just by touching the gap between the physical buttons at the top of the speaker. So you wonŌĆÖt need to shout ŌĆ£Alexa, be quietŌĆØ at 7am.

Of course, the fourth-generation Echo Dot also sports AmazonŌĆÖs voice assistant: Alexa. With, it youŌĆÖll be able to control your smart home appliances, play your favorite music, purchase things, set up alarms and reminders, listen to the news and weather, and more just by speaking.

Alexa Guard is another handy feature, alerting you of strange noises in your house while youŌĆÖre out and about. Whether a smoke alarm starts ringing or a window is smashed, AmazonŌĆÖs trusty voice assistant will warn you via the official Alexa app. You can also create an intercom system by buying several Echo Dots and placing them in different rooms around your house.

While the new Echo Dot is packed full of great features, it lacks many youŌĆÖd be getting with the fourth-generation Echo. For example, the speaker is not powered by AmazonŌĆÖs new A1 neural processor, and you canŌĆÖt use it as a Zigbee smart home hub.

If youŌĆÖre considering getting a smart speaker (which is likely, given youŌĆÖre reading this article), youŌĆÖll want it to sound great. So, how do the new Echo and new Echo Dot perform in terms of sound quality?

The new Echo sounds brilliant for a sub-$100 speaker thanks to 3-inch woofer and two 0.8-inch tweeters. It provides impressive stereo sound for a standalone speaker, and Dolby processing amplifies the audio performance even further.

The new Echo can also analyze the acoustics of the room youŌĆÖre in and polish audio playback. Whether youŌĆÖre listening to music in your living room, kitchen, or bedroom, the speaker should fill the entire room with impeccable sound. But when we compared the new Echo to the Echo Plus, we noticed that the latter produced stronger bass.

Another thing that we really like about the new Echo is that, like its predecessors, it offers a 3.5mm audio connection. That means you have the option of linking up the Echo to another speaker to create a powerful sound system for your home.

While the new Echo Dot isnŌĆÖt as powerful as the larger 2020 Echo, it certainly punches above its weight in terms of sound. Thanks to a new front-firing speaker, the fourth-generation Echo Dot is much better at filling a whole room with sound compared to older models.

The new Echo Dot is also a lot better at managing loud sounds. Like the regular Echo, you can also listen to songs and albums from popular streaming services like Amazon Music, Spotify, and Apple Music.

Despite the improved audio, the Echo Dot is far from a perfect sound system on its own. If you want the best possible sound quality, you could always create a stereo pair setup by connecting two Dots; which you can also do with the regular Echo.

Different generation and model Echos and some third-party Alexa speakers can also be combined within an Alexa multi-room audio system.

But the fourth-generation Echo is nearly twice the price of the new Echo Dot, costing $99.99.

In 2020, Amazon has done a great job with its latest smart speakers. But you donŌĆÖt need two smart speakers, so which is better and worthy of your cash?

LetŌĆÖs start with the fourth-generation Echo 4. It not only looks great thanks to an all-new spherical form factor, but it sounds better than ever, sports a faster processor, and can be used as a smart home hub. WhatŌĆÖs more, it also boasts genuinely useful features like tap-to-snooze.

Based on spec, the 2020 Echo 4 is the better speaker out of the two. This speaker is more powerful in a range of areas, but it is larger and more expensive than the Echo Dot.

If youŌĆÖre happy to spend the extra cash, and have the room to store the larger Echo, itŌĆÖs a great smart speaker. But should you want to save money and shelf space, thereŌĆÖs nothing wrong with the new Echo Dot.