Amazon Music guide: Everything to know about the streaming service 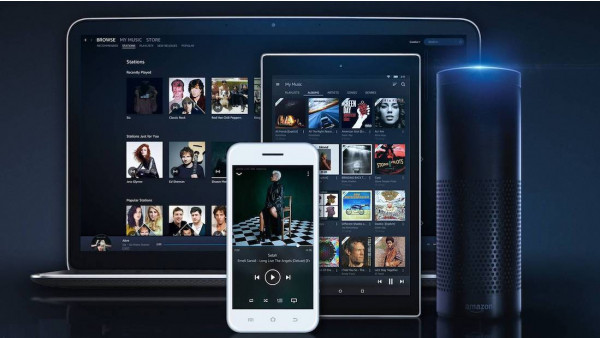 Amazon Music can sometimes be portrayed as an also-ran in the music streaming wars ŌĆō it's not quite got the clout of Spotify or the style of Apple Music... yet.

But as Amazon's array of smart speakers picks up momentum, so too does its streaming service.

And if you're a smart home user, Amazon Music can be an incredibly easy to use music service for smart speakers, and you might find that you actually have a membership without realizing it.

Read more: How to get Spotify streaming on your Alexa devices

That said, because of the tie-in with Prime accounts, the various subscription tiers on offer, and the different streaming quality levels supported by each, Amazon Music can be a little bit confusing - although there was good news in May 2021 when Amazon announced that it will no longer charge an added fee for the ŌĆ£HDŌĆØ tier of Amazon Music.

Still confused? Worry not... we've gathered all the information you should need about Amazon's music streaming service into a handy guide, below.

What is Amazon Music?

That might seem a basic question, but we think it's worth going over. Amazon Music is the name Amazon gives to its music streaming service, which has been around for years now.

(Remember that Amazon also sells MP3s for download, which is a different service to the streaming options we're talking about here.)

However, within the umbrella of Amazon Music there are few different types of subscription to pick from, depending on your needs and means.

Here's what they are, and how they differ...

You could think of Prime Music as the basic version of Amazon Music ŌĆō it's bundled in with a Prime membership, and lets members access some 2 million songs.

You can stream those without ads or breaks, as with both of the other tiers.

It doesn't cost anything per se, but there's obviously your Prime subscription fee involved and you don't get the HD streams with this plan.

Amazon Music Unlimited is the premium tier of Amazon's service, and ups the offering to 50 million songs - putting it on a par with Spotify and Apple Music.

It also has improved integration with Alexa, with more voice commands available.

You also get the ability to ask the voice assistant what you're listening to, and to play songs by an artist without being particularly specific.

The Single Device Plan is the cheapest, but only lets you use it with a single Echo or Fire TV device and there's no access to those HD streams at this cheaper price-point.

The same 50 million-strong library as the Single Device option, but opens up streaming to as many compatible devices ŌĆō from smartphones to third-party Alexa speakers ŌĆō as you like.

Plus it gives you offline playback and, in May 2021, HD streams were added to the mix at no extra cost.

The same as the Individual Plan except you can share your Amazon Music subscription across up to six different accounts.

Of course, this is a plan that works across multiple devices, as well.

What is Amazon Music HD

Amazon now offers free access to HD streams across the main premium plans, without an extra cost. Amazon Music HD, goes up against the likes of Apple Music and Tidal for lossless audio.

It offers highest-quality music streaming available on the market, with over 50 million songs in high definition alongside millions of others in ultra-high definition.

That crisp audio used to come at a higher price, Amazon' previously charged $12.99 each month for Prime members for access to Amazon Music HD and $14.99 for non-members, or an extra $5 monthly for existing Amazon Music subscribers.

But these fees were slashed in mid-2021, following Apple's decision to offer lossless music at no extra cost to its streaming users.

If you're not sure whether audio that clear is something you've been missing out on, Amazon's offers a 30-day free trial to help you decide. That should give you plenty of time to dip in and see what extra subtleties you can spot in some of your favourite tracks (provided they're among the available songs).

If you're also quite not clear on what HD audio even really means, we can catch you up a bit. Standard streaming audio is always compressed down for speed and reliability - to a bitrate of up to 320kbps, generally.

HD audio ups this bitrate to up to 850kbps, while Amazon's top-tier ultra-HD audio goes to an absurd maximum of 3730kbps.

That basically means potentially 10 times the amount of data being transferred. What it doesn't really translate to is audio that's fully 10 times better, but it will mean that you can pick up details and levels that are harder to discern on your standard stream.

How much does Amazon Music cost?

Here's a rundown of all those prices and Amazon Music Plans mentioned above (price per month):

What devices work with Amazon Music?

This might not rank as much of a surprise, but Amazon Music is most at home on Echo devices, especially those with Alexa. On these Alexa-enabled speakers, all it takes is a quick "Alexa, play Ariana Grande" command and, if Amazon Music is your default music player, you'll be jamming out almost instantly.

That applies to all Alexa-enabled speakers, actually, so whether you're talking to a Sonos Beam or an Amazon Echo Dot With Clock, it will be the same experience.

The HD tier is a more interesting one, however, as you'll need the right speakers to make use of it. It will work with your regular Echo speakers, but you're not going to notice a lot of difference. Thankfully many have a line-out, meaning you can hook them up to superior sounding speakers and still get the Alexa advantage.

Whether you're a Prime Music, Unlimited or HD user, you can stream your music through one device at a time, but you can cast that across all your home speakers, so long as they're compatible. Here's how to set up multi-room audio with Echo speakers.

If you're on a Family plan, you'll be able to have up to six individual streams at once, making sure that no-one has to listen to anyone else's tunes.

As we said, Alexa is very much at home with Amazon Music. In case you're returning to Amazon's music service from Spotify or another competitor, though, you might need to tell Alexa to default to Amazon Music again.

1. Head into the Alexa app.

3. Move down to Music under Alexa Preferences.

5. Make sure Amazon Music is checked. You're all done.

Some useful Alexa Commands for when you're playing Amazon Music

Once you're up and running, the following voice commands should come in handy when you're trying to get Alexa to control your music as you like.

"Alexa, what song is this?"

Alexa, who made this album?"