Our pick of child-friendly lights, speakers and tech toys 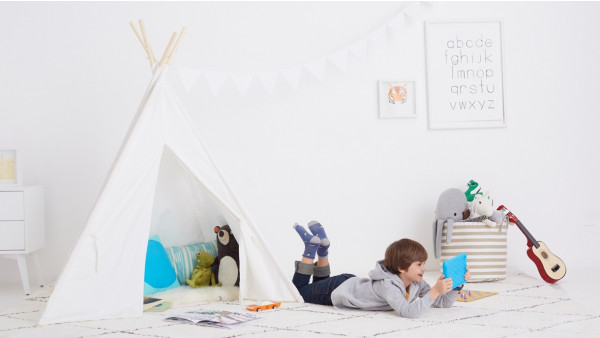 The Ambient is reader-powered. If you click through using links on the site, we may earn an affiliate commission. Learn more
Jennifer Allen
@jenjeahaly
Thursday

Kids are a naturally curious bunch which makes them a good fit for embracing some cutting edge technology. Plus kitting out their bedrooms gives you the perfect opportunity to try out some new gadgets.

Many kids' bedrooms may already contain a games console or TV, but how about going a little deeper than that? Connecting your child's room to the rest of the house can mean a lighting system that works perfectly for those nighttime worries, as well as providing low-screen-time entertainment or even a customised bedtime routine. That means you don't have to stress as much about your child's boredom levels, and they get to enjoy some cool tech that they probably thought was just there for the 'grown ups'.

Read on for our run through of what to consider when looking at gadgets for children. We'll deal with babies and teens separately so our picks are relevant for kids from toddler age to around 12/13.

Being afraid of the dark is a natural fear to have. Plenty of evidence has shown it's a leftover evolutionary trait from back when the world was a far more dangerous place without lighting.

While not exclusive to children, a fear of the dark is a fairly big deal for most children at some point in their life. Luckily, you're not stuck with drab lighting any more.

The most effective solution is Philips Hue - something that many smart homes will already be taking advantage of elsewhere in the house. Combine its Hub bulbs, and a light strip, and you've instantly got a great way of lighting your child's room. The light strip works well as a subtle night light, ensuring your kid can still sleep through the night while still seeing a glimmer of brightness, with the bulbs doing the job during waking hours.

The best part? You can program them extensively. It takes seconds to set up timers for bedtime, meaning your older children know exactly when to stop reading and to go to sleep, and you can dim them gradually to encourage sleepiness.

All this can be done solely through your smartphone, but I've found pairing them with Logitech Pop works particularly well.

The Logitech Pop is probably one of the most boring looking pieces of tech out there, being a plain square that sticks on any surface, but it's useful and flexible. Effectively, it's a wireless button that works through Bluetooth to control pretty much anything that also has Bluetooth. Due to some weird wiring in my house, I have it set up to turn on one of my lamps rather than needing to use a previously wired light switch. A double tap can easily manipulate other devices too, adding to what you can accomplish with a quick tap.

Being a sticky square, you can place it low down on the wall when your child is little, before moving it (with no residue left over) upwards as they grow. Just don't expect anyone to be impressed at its looks. It is really quite drab, no matter what colour you choose.

Is there a kid in the world that doesn't want to listen to their favourite song 300 times a day? Probably not. More powerful solutions like something Sonos based are perfect for the living room, but you want to keep things cheap but cheerful for the kids. One incident with a glass of squash or someone throwing a ball around, and you'll be grateful you went for the 'fun' option.

The Creative Halo is the most fun speaker I've come across in a long while. At first, it looks utterly absurd. A mirror forms an edge around the speaker part and its fabric exterior feels like you could fling it around without any problem. Even its packaging feels like you're dealing with a toy thanks to its 'try me' button. It's actually pretty cool. Offering two full-range drivers and a hidden passive woofer, the audio is exactly what you would expect from a Creative device.

Its real killer feature, however, is its lightshow. Offering 16.8 million colours (but who's counting?), along with 12 halo effect patterns, it can easily light up via a button or via the Xpectra Lightshow Control app. With chunky buttons to manipulate, it's ideal for a younger child because it's so ridiculously over the top yet fun.

Your older child is going to be embarrassed by what it does though, and is sure to favour something a little classier and cooler. In this case, try the Creative Muvo 2. It's simpler, more subtle, water-resistant, and even offers a built-in MP3 player. The big kid in you will long for them to favour the bizarre spectacle of the Halo, though.

It'd be tempting to pass your old iPad down to your kids, but Amazon has a better idea in the form of the Fire 7 Kids Edition. Working just like a regular Fire 7, it comes with a Kid-Proof case available in a choice of vibrant colours, extensive parental controls, a kid-safe browser, and a year's worth of Fire for Kids Unlimited.

Basically, that means you can be safe in the knowledge that your kids are only going to access age appropriate content, and you can choose to set up a bedtime routine so they have to stop when you tell them to.

The Fire 7 Kids Edition also includes a 2 year worry-free guarantee that covers all kinds of accidents, ensuring that if your child breaks it, Amazon replaces it for free.

Aimed at children up to aged 10, Remi hopes to create the best bedtime routine possible for your child. It looks suspiciously like a ghost from Pac-Man but that's all part of the charm. The device from Urban Hello lets you create a customised routine through alerts, lighting, and music, hopefully lulling your child into falling asleep every time. For the older child, they can easily customise it themselves too, getting them into good sleeping habits.

For peace of mind, you can use it to listen in on your baby or child sleeping, keeping an ear on how well they're doing, while providing a diary of sleep events. In the mornings, you can talk to them through your smartphone, giving them a heads up it's time to get moving.

The future for kids room tech

More big names are getting involved with tech aimed at kids bedrooms but there are stumbling blocks along the way.

Mattel looked to be getting in on the act with Aristotle. Working like the Amazon Echo but with a focus on kids, it aims to offer extensive features for the technologically minded parent. With a wireless camera streaming encrypted video to your phone, it was designed to automatically recognise when your child wakes up, soothing them to sleep with a lullaby or night light. The software also claimed to be able to answer questions until your child falls asleep, play guessing games with them, and read various stories to them, along with sound and light effects. Aristotle would even teach basic manners such as requiring your child to say 'please' at regular points.

It almost sounds too good to be true and, in a way, it was. Originally pencilled in for a release in 2017, the Aristotle was first postponed and then, after Mattel received a petition over kids' privacy and child development with over 17,000 signatures, has now been cancelled entirely. So it looks like we're ready for lights, music and tablets in our kids rooms but not a full-on AI babysitter. For now, parents are going to have to stick with more traditional methods while we figure out how much interaction with voice assistants, and similar technologies, we want for our children especially when unsupervised.

What tech do you allow or encourage in the kids room? What would you be worried about? Let us know what you think in the comments.