These smart features are grounds for purchase 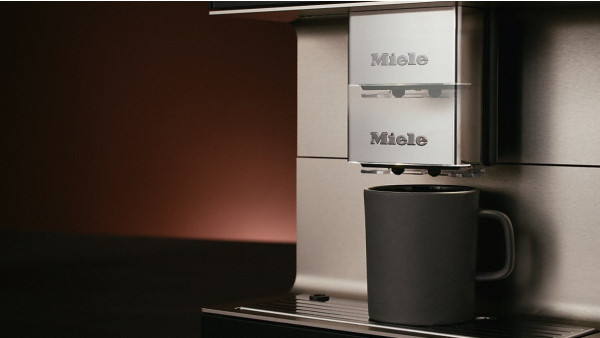 The Ambient is reader-powered. If you click through using links on the site, we may earn an affiliate commission. Learn more
Gareth May
@garethmay
Thursday

Over the years, coffee and tech have enjoyed somewhat of a strange love-in. While tea drinkers wax lyrical about gimmick teapots and the merits of loose leaf vs. bag, coffee has been blazing a technology-fueled trail.

When it comes to smarts, coffee is streaks ahead. And thatŌĆÖs never been truer than in the home. You can even purchase a kitchen aid slash keg for cold-brewed nitrogen coffee. Looks safe doesnŌĆÖt it? Some things are best left to the barista.

For everything else thereŌĆÖs smart coffee machines because gone are the days of Nespresso ŌĆō with its groundbreaking capsule system and silver fox Clooney mascot ŌĆō monopolising the market. Nowadays everybody is in the coffee machine game and theyŌĆÖre increasingly getting a smart makeover ŌĆō even Alexa and Google Assistant are getting a look-in.

WeŌĆÖve gone hands-on with a host of brands, picking from a range of sizes and styles, for varying budgets and needs, to find the best match for the smart home dweller. HereŌĆÖs our pick of the coffee-brewing bunch. But firstŌĆ”

Why buy a smart coffee machine?

By all accounts thereŌĆÖs not a great argument to get smart with your hot drinking habits if youŌĆÖre not a coffee aficionado. If you take it instant with a splash of milk and two sugars youŌĆÖre wasting your time as a machine will only seem like a lot of extra work.

That said, a smart coffee machine goes well beyond making a cup from the comfort of your bed. In fact, if youŌĆÖre hoping to find a machine that connects to Alexa or Google Home youŌĆÖre out of luck. Virtual assistant integration isnŌĆÖt something any of the top brands currently provide and the Smarter Coffee Machine, which featured compatibility with both assistants, has unfortunately been discontinued (we were told by its UK supplier that the machine is currently unavailable ŌĆ£globallyŌĆØ).

But wipe away the macchiato tears. Unlike a smart lighting or heating system thatŌĆÖs been rigged up to optimise a householdŌĆÖs routine, when it comes to coffee, remote function (typically via a branded mobile app) is the tip of the (ice-coffee) iceberg.

ItŌĆÖs the hidden smart elements that excel here, rendering each one of the machines below a caffeine addictŌĆÖs dream.

The Y5 capsule machine combines top-notch tech with an outstanding reputation for perfect brewing, all squeezed into a svelte and minimalist piece of kit.

ItŌĆÖs neat and sleek with a water tank thatŌĆÖs conveniently positioned at the front, along with a touch-sensitive interface thatŌĆÖs as responsive as it sounds and easy to understand. Both elevate the basic black plastic body, as do the strategic pops of chrome.

On the coffee front, as youŌĆÖd expect from Italian brand Illy, whether you make an espresso-style or filter-style cup, both deliver high-quality, deep-flavoured brews. The smart elements are from the My Illy Espresso app. Pair the app with the machine via Bluetooth and you can request a coffee whenever you feel like it.

The app lets you customise the ŌĆślengthŌĆÖ or water volume of either drink, so you can get the exact cup size each time (it comes programmed with a 55ml and a 240ml drink). You can also pre-programme a time for the machine to switch on, so that itŌĆÖs ready to start brewing the minute you wake up ŌĆō and it's Amazon Dash Replenishment-enabled too.

A behemoth of bean-to-cup coffee machines (with a ground, albeit superfluous option, to boot) MelittaŌĆÖs smart effort showcases tech at every turn, from bean sensors to an outstanding app. Just be warned that it's hefty ŌĆō it almost required two of us to lift it out the box.

The dual bean hopper, for light and dark roasts, has you covered if you like to play pick & mix with your beans. Meanwhile, thank to an infrared sensor, the TS will notify you once either hopper is empty and then automatically run a dry cycle so past beans donŌĆÖt taint future flavours (ideal for switching from caffeinated to decaff at night).

The TS also has the best app on this list. ItŌĆÖs streamlined and user-friendly with configuration covering drink length (to the nearest 5ml), strength, temperature and number of espresso shots, with alterations easily saved as a customised recipe in the My Coffee tab (on top of the 21 recipes already loaded in).

All of this can be done on the touchscreen but the appŌĆÖs interactive sliders, which are clean and responsive, made tweaking drinks on the fly as addictive as Tinder circa 2015. Aside from requesting origin and syrup shots we honestly found it easier than asking for a custom coffee in a coffeehouse; itŌĆÖs that well designed.

The touchscreen also has some nice additions, from telling you when you need to refill the hopper to the orderly loading bar to denote drink wait time. Also, the TS can dispense two drinks simultaneously, whether thatŌĆÖs a flat white or a latte macchiato; the IntenseAroma mode, which alters the brewing process to deliver a richer tasting espresso, is perfect for those people who just want a great tasting coffee without all the faff; and the milk foam bolt-on is simple to attach.

the ambient verdict
Melitta Caffeo Barista TS Smart
Despite having a lot going on the TS can be up and running in a matter of minutes and itŌĆÖs even easier to dispense a coffee with the app. The taste of bean to cup vs. capsule is always superior with an unsurpassed crema on the espresso.
PROS
CONS

The Miele ŌĆō a bean-to-cup coffee machine (with ground as an option) ŌĆō shares many of the same features as the Melitta, especially in terms of build and finish with both machines visually near identical. Where it comes into its own is with upkeep with a (patented) AutoDescale feature, which automatically dispenses a cleaning tablet to prevent limescale build-up every day at a user-programmed time. This is an absolute godsend, especially when you consider that one solo cartridge will last up to a year and areas with hard water recommend descaling every two months. ThatŌĆÖs some saving on the elbow grease. Yes, the Miele is a huge investment but itŌĆÖs one that should last.

Nearly all CM7 models can be operated via a mobile device with the [email protected] app, which lets you programme settings (including on and off times), control up to ten user profiles for extreme customisation, "order" a coffee from anywhere in your home, or shop for coffee beans and descaling tablets.

MieleŌĆÖs interface is full of clutter and itŌĆÖs not always obvious to see what buttons youŌĆÖre meant to push. Once youŌĆÖve worked it out the options include coffee strength and water temp as well as volume, but it never feels as nifty as MelittaŌĆÖs design. ItŌĆÖs a similar story with the touchscreen on the actual machine itself, with confusing icons. By comparison, MelittaŌĆÖs effort is a doddle.

Away from the app the Miele has further smart elements up its sleeve. The CupSensor, which recognises the height of a mug or cup on the drip tray and positions the spout accordingly to the ideal height, not only prevents splash back but also means that youŌĆÖre getting a really bronzed and gleaming crema in that espresso cup your auntie bought you for Christmas last year. As such, when combined with good beans the Miele goes toe-to-toe with the Illy for espresso quality.

The sensor also means that you can fit a pot under the spout for large servings of coffee or tea (though thereŌĆÖs no temperature setting for the tea beyond 80┬║C or 90┬║C, which is a shame because green and white teas should be brewed at 70┬║C). A light in the spout also keeps things illuminated.

The ŌĆśOneTouch for TwoŌĆÖ function, to make two cups of coffee simultaneously, would be more impressive if it wasnŌĆÖt for the speed of the standard dispensing. You could literally bosh out a dinner party order in a matter of minutes with this thing. ThatŌĆÖs impressive.

As a truly professional machine the coffee is a bit of let down. The flat white was exceptional with silky, frosting-thick foam, but the default lukewarm temp lacks the finesse of a barista-bought cup. The milk dispensing is also noisy, especially the cleansing jet of water that results in quite the mess.

the ambient verdict
Miele CM7550
Looks the part, sounds like Darth Vader, and takes up a lot of space. The app isnŌĆÖt as good as with the Illy and Melitta machines but the real pay dirt here is the self-sustaining, coffeehouse-standard upkeep and adjustable spout.
PROS
CONS

Customisable temperature, pre-soak time and altitude, along with Alexa voice control, makes the Behmor a formidable coffee machine. The app lets you create multiple profiles, while Amazon Dash Replenishment will ensure you never run out of beans. And should you ever not want to bother with the app, just hit the quick-start button on the front ŌĆō or give Alexa your order. Good for precision.

Get your Bluetooth bean brew on with Nespresso's personalised coffees in the accompanying smartphone app. You can also use the app to schedule brew times, brew remotely, and replenish your depleting capsules. As for the machine itself, you've got three temperature settings, four sizes and a 30-second heat-up time.

One of the pricier machines on our list, the Avanti is about as hi-tech as your coffee can get. The app offers a wealth of customisations for your brew, also giving you a heads-up when it's time to change the water filter or give the machine a descaling. Did we mention the integrated frother? Phwoar.