The top connected tech for your smart home kitchen 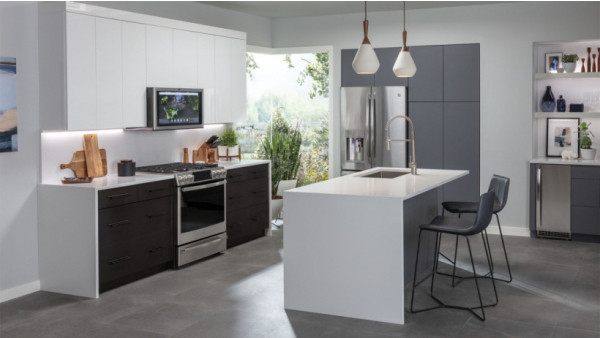 The kitchen is already one of the most technologically advanced rooms in our homes; with so many gadgets and gizmos already taking up precious counter space, it's not a surprise the "smart kitchen" has been the slowest room in the smart home to catch on.

Whether it's using AI to help you become a better cook, providing entertainment while you're laboring away in the kitchen, or helping keep your family organized and your household chores running more smoothly, smart kitchen devices can be really useful.

Here, we've rounded up some of the best smart kitchen devices available today, to help you find the right connected gadgets when you're looking to update your appliances.

Samsung's range of Family Hub fridge/freezers are the original smart fridges. Boasting a 21.5-inch screen with the ability to mirror a Samsung smart TV, the Family Hub part of each fridge is essentially a giant tablet packed with apps.

Designed to be the "hub for your family" the tablet features a Family Board, Memo, Calendar and Shopping List apps to help you and your family communicate ŌĆō it's the 21st century version of the note stuck on the fridge door.

Built-in recipe apps and streaming music apps include Spotify, Pandora and Smart Recipes, plus a screen-share for Samsung smart TVs ŌĆō so you can watch the TV while you cook ŌĆō make this an all-around entertainment device, without cluttering the counter.

But the Hub is more than just a fancy smart screen. Three cameras inside let you see the contents of your fridge from the companion smartphone app as well as through the deviceŌĆÖs screen. A food tracking system lets you keep track of the expiry dates, and a timeline view allows you to go back and see a visual history of the contents of your fridge.

Samsung's smart voice assistant Bixby is also built in, so you have voice control over entertainment, news briefings and memo taking, plus more of the usual voice assistant features. It can also recognize different family member's voices and give them personalized content.

Then there's Samsung SmartThings integration, which basically turns your fridge into a hub for the whole smart home. You can view any SmartThings-compatible home cameras, doorbells, and turn lights on and off, all from the display.

While LG has been in the smart fridge game for a while, ThinQ adds AI to the mix, allowing it to talk to other LG ThinQ devices ŌĆō informing the dishwasher that a big load is on the way, for example.

LGŌĆÖs AI platform, the Instaview ThinQ, also has Alexa built in to read out recipes and let you add items to your shopping list as you run out of ingredients, as well as being a bit of an entertainment hub.

Back to the fridge, and thereŌĆÖs a 29-inch screen on the front, running webOS. There are apps; some for making notes, leaving doodles for your family, or inputting specifics on the contents of your fridge. A menu of virtual Amazon Dash buttons lets you reorder whatever you need with just one tap.

Two taps on the display will turn it transparent, so you can see inside and check out how many beers you have left. A panoramic camera is in there too, which you can view from your smartphone. Bluetooth speakers embedded at the top of the fridge let you play music from any compatible device so you can rock out while cooking.

Connecting your oven to the internet lets you start pre-heating while you're on your way home, or check and make sure it's switched off when you've left the house. But we want a little more from our smart ovens (especially as they are pretty pricey), so we were quite impressed when KitchenAid, the makers of everyone's favorite stand mixer, applied its attachment mentality to its new smart oven.

With a series of powered attachments, this wall oven can become an indoor grill, baking stone and steamer, as well as do all the normal oven things. Just like the stand mixer, the attachments plug into a powered hub, plus you can control the whole cooking process on your smartphone.

It's also Google Assistant and Alexa-compatible, so you can direct it all with just your voice.

What we like here is that this smart oven isn't just about being connected, it's also about finding other ways to use technology to improve and enhance your cooking process.

No smart kitchen tech round-up would be complete without Instant Pot. An incredibly popular device; the company doesn't reveal sales numbers but Amazon counts Instant Pot sales on Prime Days in the hundreds of thousands.

The beauty of the Duo Evo Plus is the simplicity. There are 48 pre-sets on board, allowing for easy cooking and prepping for things like rice, slow cooking, soups sous vide, fermenting and proofing. There are also eight one touch buttons on board for the most popular functions, making it even easier.

The large LCD display provides everything you need to know about cooking time, temperature, pressure and status, among others.

Speaking of more ways to cook, the June Oven packs a convection oven, air fryer, dehydrator, slow cooker, broiler, toaster and warming drawer all into one appliance. A smart countertop oven, June brings the convenience of connected cooking in a smaller, more-easy to install package.

An Alexa skill lets you pre-heat your oven with your voice, or use the app and have it ready when you get home. Carbon fiber heating elements preheat three times faster than other ovens, and a built-in HD camera not only lets you keep a close eye on your food, but also uses AI to recognize over 50 common foods and suggest the correct automatic cook-program for you.

A small, Android-based touchscreen lets you control everything on the device if you want, and features pre-set cooking recipes for everything from cookies to steak, plus one-tap cook programs for over 200 types of food, guaranteed to help even the most useless of cooks prepare a decent meal.

If you haven't cooked with sous vide you haven't lived. This pro-chef technique uses precise temperature control to deliver consistent, restaurant-quality results when cooking fish, meat, eggs, veggies, basically anything you can bung in a bag.

The Anova Precision Cooker brings smarts to sous vide, which means ŌĆ£under vacuumŌĆØ in French and refers to the process of vacuum-sealing food in a bag, then cooking it to a very precise temperature in a water bath.

Put the wand-like device in a pot of water and control the temperature, follow step-by-step directions for recipes right from you phone, to take the guess-work out of this unique cooking method. You can also control it remotely, set up your meal in the morning, and have it ready and waiting for you when you get home.

Amazon's stock export might be its speakers, but it's slowly but surely making its way into every aspect of the home and upping its connected smarts. And perhaps no example makes that clearer than the AmazonBasics Microwave.

Alexa isn't baked in here, but it can hook up to a compatible device in order to take your cooking commands. Think of this as the first of many appliances Amazon and its partners are ushering into the smart era.

Designed as a hub for your kitchen and your connected home, the GE Kitchen Hub is a 27-inch Android-powered touchscreen and ventilation system.

Alongside the giant screen, two cameras ŌĆō one for video chatting and another for viewing food on your cooktop ŌĆō help you bring your cooking into the modern age. Video chat with your mom while whipping up dinner, or share pictures of your food over social media.

The Hub also features voice-command capabilities via Google Assistant, as well as access to Android apps for recipes, music, movies and social media. It's essentially a really big Android tablet in the middle of your kitchen ŌĆō but it's not taking up any counter space.

The Hub works with GE's U+ Connect platform to integrate with other Haier/GE appliances including washers, dryers, dishwashers, refrigerators, air conditioners, wall ovens, cooktops, microwaves and ranges ŌĆō so you can control them all from the screen.

This kitchen block is not only a handy place to put your knives, utensils and cutlery to dry but it also uses UV LED lights to sterilize them; promising to kill 99.99% of germs.

As well as drying through a 70Ōäā high-temperature process, the Hookee Knife Guard light eliminates bacteria by destroying the structure of DNA and RNA at the cellular level.

No, we don't have a clue what that means either but we're suckers for cleanliness in the kitchen so we're all for it.

Drop scales will have you baking like Mary Berry in no time. Simply select your chosen dish from a companion app's recipe book and these connected scales help you put together the exact ingredients to make your bake a great success.

The recipes are all one-bowl affairs, so less washing up after, and the app will even offer up alternatives ('smart substitutions') if you haven't got quite enough of one ingredient.

If you keep poisoning your dinner party guests with undercooked meat, you need Meater in your life. Touted as the first wireless smart meat thermometer, the startup is now back with its second generation Meater+ ŌĆō much more than just a digital reader with Bluetooth.

Its big strength lies in the app that accompanies it. Simply insert the Meater+ probe into whatever you're cooking (pork, poultry, fish or really any meat), leaving the ambient sensor an inch or so of room, and then select the meat type, cut and desired finish in the app. The app will then tell you the target temperature, the current temperature and the ambient temperature, giving you alerts on cooking times along the way (you leave Meater in while you cook).

Suitable for oven cooking, the BBQ and more, the Meater probe actually charges within its own box through an AA battery. Its newer model also has a range of 50m from the phone (up from 10m in the first generation), using its case as a signal repeater.

Last year, the The Meater Block went live, which is able to store and charge 4 probes, allowing you to monitor a quadruple of meaty treats at once. The Meater Block also includes a touch control screen, showing you stuff like remaining time, temperature and so on, so you don't even need to bother with the app, if you're feeling lazy.

The Y5 capsule machine combines top-notch tech with an outstanding reputation for perfect brewing, all squeezed into a svelte and minimalist piece of kit. ThatŌĆÖs something of a matter of pride for Francis Francis: making machines that bleed cool.

The Y5 has a modern vibe. ItŌĆÖs neat and sleek with a water tank thatŌĆÖs conveniently positioned at the front, along with a touch-sensitive interface thatŌĆÖs as responsive as it sounds and easy to understand. Both elevate the basic black plastic body, as do the strategic pops of chrome.