Eve guide: Your missing manual to the HomeKit specialist 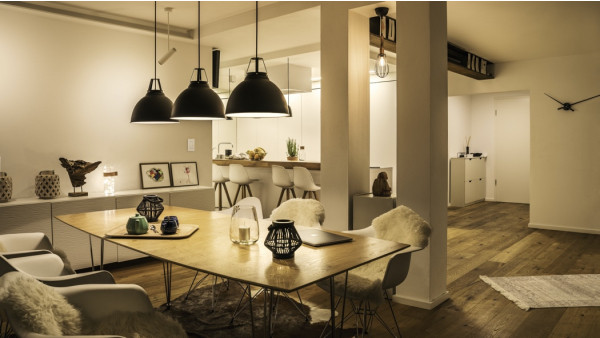 Eve has been in the connected home game longer than many of its rivals, and its HomeKit exclusivity makes it an obvious winner for iOS fans looking to step up their smart home systems.

With smart devices across a plethora of categories ŌĆō lighting, power, security and more ŌĆō Eve is an easy way to add devices to any HomeKit setup, while at the same time offering a pretty comprehensive companion app to manage non-Eve HomeKit compatible devices as well.

Eve is also one of the few smart home companies to offer most of its products in the US, UK and Europe.

Here's everything you need to know about Eve and its HomeKit-focused smart home ecosystem.

We've used the word HomeKit about 17 times already and, if you're looking at getting some Eve kit into your home, expect to see it a lot, lot more.

That's because ŌĆō as mentioned above ŌĆō Eve has gone all-in with Apple's smart home ecosystem. There's no Alexa compatibility, Google Assistant is MIA and don't expect any other third-party integrations from the likes of IFTTT. If you're not using an iPhone ŌĆō or at least an iPad ŌĆō forget about it.

However, if you are on board the good ship iOS then you can expect a pretty seamless experience. Eve accessories use Bluetooth low energy, so they work straight out of the box direct with the Apple Home app, after you scan that HomeKit code.

Of course, as with all HomeKit devices, you'll get a more robust setup (plus remote access) if you throw a dedicated HomeKit hub into the mix ŌĆō an iPad, Apple TV or a HomePod, is the best way to do this.

The Eve app is much more comprehensive for controlling your Apple HomeKit devices than Cupertino's native one (in our opinion, at least). Not only can it control the Eve devices listed below and pick up any other HomeKit devices you've added using the Home app, but it also has deeper access to some features on devices, letting you set triggers such as temperature, which you can't do in the Home app. But if you want stick with Apple, you can simply add Eve devices direct to the Home app and never touch Eve's app at all.

Here are all the Eve smart home devices currently available and coming soon.

The the Eve Energy Strip is arguably the best looking power strip on the market today, coming in a black housing with a clean-looking aluminum frame. It's very Apple-y indeed.

The biggest drawback is there are only 3 outlets, but you can control schedules and manage each one in the Eve app, as well as see energy consumption and the projected cost of each plugged-in appliance in the Eve app.

Any connected device can be incorporated in to HomeKit scenes and automations as well as be controlled individually with a voice command via Siri - so you can say "Siri, turn on the TV."

The Eve Energy smart plug and power meter is one of the most feature packed smart plugs out there, with energy consumption data for whatever's plugged into it ŌĆō along with cost details and yearly projections for usage.

For too long however, it was just too bulky to be a top contender, as it blocked out the extra outlet. This January however, Eve announced a redesigned, smaller smart plug, that is also cheaper. Bonuses all around.

Previously US-only, this connected light switch is now available in the UK and Europe, in a slightly different form-factor. It gives you control of your lighting through the power of Siri, your iPhone, HomeKit rules or device schedules in the Eve app.

Using existing wiring you can convert any single or multi-bulb setup into a smart lighting system.

The Eve Flare is a portable smart light, offering six hours of battery life and an array of color customizations. There's also IP65 water resistance, so it's safe to use outdoors.

This 2m LED strip (which can be extended to a length of 10m) beams out white and colors at 1800 lumens and is the brightest HomeKit-enabled LED strip to date.

Like light strips from the likes of Hue and Koogeek, it can be cut to size and comes with a peel-off adhesive strip on the back so you can easily attach it behind furniture.

The Eve Cam is the company's first indoor smart security camera, and was the first camera to be created exclusively for Apple HomeKit Secure Video. That means your footage is privately analyzed by your HomeKit hub (Apple TV or HomePod) and uses "onŌĆædevice intelligence" to determine if people or pets are present.

Boasting a magnetic base and adjustable arm, the camera has a 150 degree wide angle lens, IR night vision and records Full HD 1080p video. There's also a microphone and speaker for two-way audio.

When motion is detected you can get a notification that lets you view the clip from the iPhone Lock Screen. You can also view recorded video clips for for ten days in the Home app; it's stored in your iCloud but the good news is clips don't count against your data plan.

Created in collaboration with Hager, Eve's smart smoke alarm packs both a photoelectric smoke sensor and differential heat sensors, so is able to warn you about both smoldering and flaming fires.

With a battery life of 10 years, the Eve Smoke will also wirelessly sync up with other devices in your Eve home, as well as third-party HomeKit devices. You could have lights going on when an alert is triggered, for example. Eve Smoke is only in the EU, with no plans for a US version.

The second-gen Eve Room comes with a redesigned aluminum body and a high-contrast 1.54-inch E Ink display, which will tell you the temperature, humidity and air quality in your home.

There are four different display layouts to choose from, and you can switch between them via touch panels on either side of the screen. The latest Eve Room has also done away with replaceable batteries in favor of a rechargeable one.

Looking a heck of a lot like the Room, the Degree is solely focused on the temperature, air pressure and humidity of its surroundings.

Essentially, it is the Room ŌĆō minus the air quality monitoring smarts ŌĆō but if you're more interested in the weather aspects anyway, you can save yourself some money. It's also weatherproof and can be used outdoors as a mini weather station.

Read this: How to reset your HomeKit home

EveŌĆÖs Waterguard is the only smart leak detector that plugs into an outlet, so no need for batteries. It features an extra long 2 m/6.5 foot sensing cable to cover a wide area. Adding audio and visual notifications will help avoid the problem of potentially missing an alert on your phone when thereŌĆÖs a leak.

The water sensor's cable looks like a regular nylon charging cable but is super sensitive. One drop of water hitting any part of it sets off an alert, and the way you can extend and manipulate the cable to get it where you want, makes it a more versatile option than most water leak detectors, which essentially sit in one spot.

A stalwart motion sensor, large in stature but packing plenty of battery-power so you won't have to replace them every few months, the Eve Motion Sensor can be used to trigger your lights to turn on, activate a HomeKit scene, or initiate an automation.

Waterproof, so it can be used in kitchens, bathrooms and covered porches, you can adjust the sensitivity in the app to get you exactly the reaction you want. Another great use case is as a security sensor.

Apple's Home app has a feature that lets you turn notification for sensors and locks on, so you can be pinged if there's motion in your home when you're not there.

These contact sensors can give you a real-time status of whether a door or window is shut ŌĆō simply by checking the app or by asking Siri. As with the motion sensor, they can also be set to ping you every time they're activated, or just when you're not home.

But as with the Motion Sensor, the Door and Window duo works best when put into HomeKit scenes, so you can have the lights come on when you open the front door, for example.

The Eve Aqua is a smart water controller that simply pops on to a regular outdoor faucet and, using the Eve app, your Apple Home app, or indeed via Siri, gives you the power to turn the water on or off remotely.

Within the app you can also set schedules for when you want watering to start and end, and see data of your water usage, too. There's a button on the device itself, if you just want to turn the tap on or off independently, and there's a child lock as well.

Eve Extend is an essential piece of kit if you live in a home with more than one floor or that's longer than 30 feet. It helps Eve accessories beyond the Bluetooth range of your iPhone or hub (traditionally only 20 to 30 feet) connect to HomeKit. This means you can put your devices further from your hub without seeing that dreaded ŌĆ£no responseŌĆØ in the Home app.

You can assign up to eight Eve accessories to one Eve Extend, and you can have multiple in your home, helping keep your Eve Motion and Door & Window sensors, light switches, and other HomeKit gadgets more responsive.

Program Eve's smart button to turn on or off or dim a connected lamp, or set it up to control up to three HomeKit scenes, controlling each with either a single, double or long press option.

Set off a chain of connected events at the touch of a buttonŌĆ” think lights off, door locked and thermostat set when you leave the house, for example.