Which bitesize smart speaker is best? 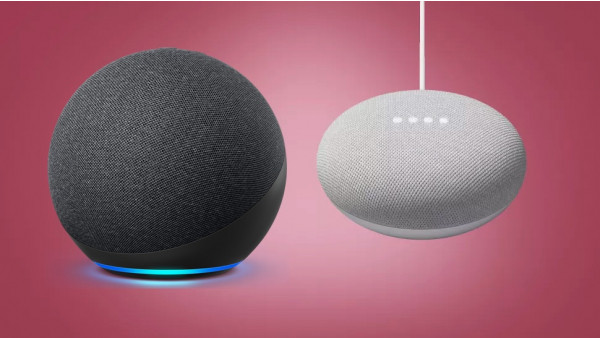 The Ambient is reader-powered. If you click through using links on the site, we may earn an affiliate commission. Learn more
Nicholas Fearn
@nicholasgfearn
Thursday

When you think of all the fantastic things that smart speakers can do, you might assume theyŌĆÖd be an expensive purchase. But thatŌĆÖs not the case as you can purchase an excellent smart speaker for less than $50.

GoogleŌĆÖs Nest Mini (2nd-gen) and AmazonŌĆÖs Echo Dot (4th-gen) are two of the cheapest smart speakers on the market, with both costing $49.

If you're choosing between Alexa and Google Home, the Dot and Mini still represent the most cost effective choice.

To help you choose the best cheap smart speaker, we compare their designs, features, and sound quality.

In terms of design, the Nest Mini looks pretty similar to the first-generation Google Home Mini. But, underneath the speaker, thereŌĆÖs now a hook that allows you to mount it on a wall without an additional accessory.

WhatŌĆÖs also different is that Nest Mini has a larger barrel plug, rather than a Micro USB lead. Because the plug is located on the side of the speaker, you wonŌĆÖt be able to hide it away in your wall (if you were to mount it).

The Nest Mini is wrapped in a fabric covering, and admirably, Google created it from 100% recycled plastic. Despite this, the outer layer has a similar feel to the first-generation Mini.

On both sides of the speaker, youŌĆÖll find LED touch panels for increasing and decreasing volume. To play and pause audio, you just touch the lights placed in the middle of the speaker.

Unlike all generations of AmazonŌĆÖs Echo Dot, the Nest Mini doesnŌĆÖt sport an audio jack. Because of this, the only way to link the Nest Mini to another speaker is over Bluetooth. Google has also replaced the Aqua hue color with a new Sky blue, which is apparently based on the colors of ItalyŌĆÖs Lake Como.

On the other hand, the 2020 Echo Dot sports a new spherical design (just like the fourth-generation Echo).

The new Echo Dot is similar in size to a softball, while the 2020 Echo is as large as a melon. It also sports tactile buttons that poke out of fabric covering, a semi-circular base made from plastic, and an identical proprietary power port that we see on the new Echo.

Like previous generations of the Echo Dot, the 2020 model also comes equipped with a 3.5mm audio jack and an out-of-the-box Bluetooth connection. This makes it really easy to connect the Echo Dot to a better sound system, while the Nest Mini is limited to just Bluetooth.

YouŌĆÖll find buttons for adjusting volume, muting songs, and physically waking up Alexa, as is the case with other Echo speakers. But we noticed that the buttons on the new Echo Dot are closer together than previous generations.

Another thing that surprised us was that the 2020 Echo Dot is twice the third-generation model's height, but both versions are identical in width. You wouldnŌĆÖt expect the Echo Dot to get bigger, as itŌĆÖs always been positioned as a smart speaker you can easily hide away on a shelf or worktop.

Elsewhere, Amazon has decided to move the LED right ring from the top of the speaker to its base. As a result, itŌĆÖs not as imposing as before and makes the Echo Dot look even better next to your bed.

Google has kitted out the second-generation Nest Mini with a range of new features. When it comes to audio, youŌĆÖre able to create a stereo sound system by combining two Nest Minis, and you can also transfer music between two Google Home speakers via GoogleŌĆÖs Stream Transfer feature.

To do the latter, you just say something like: ŌĆ£Hey Google, move the song to the living room speaker.ŌĆØ When we tested Stream Transfer, it was handy. But there was a small lag of a few seconds.

The second-generation Nest Mini sports an ultrasound feature, too. This detects if a hand is close to the speaker and lights up the LED touch controls.

Google Assistant is at the heart of the Nest Mini, allowing users to ask for weather and news updates, create timers, wake them up in the morning, play music, and lots more. In our review of the new Nest Mini, we were impressed with the improved performance of Google Assistant (which no doubt comes down to its new machine learning chip). It was able to switch lights on and off in less than two seconds and better understand voices when controlling smart home devices.

When it comes to new features, the 2020 Echo sports a front-firing speaker (weŌĆÖll talk about this shortly) and a touch-to-snooze alarm that we first saw on the first-gen Echo Dot with a Clock. Using the latter, you can snooze your alarm by touching the gap in the middle of the buttons at the top of the speaker.

Overall, the fourth-generation Echo Dot is still a great smart speaker due to AmazonŌĆÖs voice assistant: Alexa. Whether itŌĆÖs controlling your smart home devices, creating timer and alarms, updating your calendar, playing music, shopping, or listening to the news, thereŌĆÖs so much you can do with Alexa.

As per the diddy Google speaker, the Echo Dot can also be paired with a mate for a stereo speaker setup and can also be used as part of an Alexa multi-room speaker system.

Amazon and Google's smart speakers are always getting better at recognizing our voices. We've nary had a problem with the Echo Dot hearing us, even when we're speaking during a song or using Alexa's whisper mode. It's mostly the same with the Google Home Mini, but the further away you get the less accurate it's going to be.

How to: Set up Alexa Routines | Set up Google Assistant Routines

Google has always made a big deal of its Assistant's ability to understand context. You can ask it a question, then follow up with another question on that same topic without repeating what you're talking about. This mostly works well, though there are sometimes instances where it just flat-out fails.

Alexa is still a little more rigid than Assistant, largely because of the way using skills works. Assistant used to have the advantage with follow-up conversations, but Alexa has caught up with its own continuous conversation feature. It's also added more advanced voice features like whisper mode and newsreader mode. These are smaller things, but they make for a better overall experience. However, there are still moments on Alexa where some skills require language to be a little too exact, which can be frustrating.

All in all, Google's contextual understand gives it a small nod over Amazon, particularly if you're interested in AI butler controls. However, Alexa is catching up and is becoming much more helpful. It all depends on which speakers you already have and how you want to listen to connected music. So, if you're looking to upgrade to better sound because you've invested in some good sound equipment already and want something that works with a 3.5mm jack, the Echo Dot may line up better with your needs.

If youŌĆÖre looking for a new speaker, sound quality is an important area to consider. The second-generation Nest Mini offers a much better sound experience than its predecessor, thanks to a custom 40mm driver and stronger bass.

Compared to the first-generation Home Mini, the Nest Mini is a lot louder overall. But we found that sound does distort when you turn up the volume. If you mount the Mini on a wall, the sound will be even more impressive as thereŌĆÖll be a better range-of-fire in your room.

But of course, youŌĆÖre able to improve the sound experience by combining two Nest Minis via Bluetooth. The Ambient IQ feature is also pretty handy, making Google Assistant louder based on the sound environment.

The 2020 Echo Dot also sounds better than its predecessor. In particular, the new front-firing speaker fills the room with even more sound, and the speaker is more skillful at managing loudness.

While the fourth-generation Echo Dot does sound better than the third-generation model, it wonŌĆÖt fill an entire room and doesnŌĆÖt have the best clarity when you turn up the volume to the maximum. But like the Nest Mini, you can achieve a better audio experience by pairing together two Echo Dots.

When it comes to pricing, both the Nest Mini and Echo Dot are at the cheaper end of the smart speaker market.

They cost the same price of $49, respectively.

Nest Mini v Echo Dot: Which is the best?

Overall, both of these are great smart speakers when you consider their affordable price tags. What we love about the Nest Mini are its on-device controls, impressive sound quality, and easy-to-use wall mounting hook.

AmazonŌĆÖs new Echo Dot also impressed us in our review. It is worth considering thanks to a new design, easy set-up process, handy tap-to-snooze feature, excellent voice control, and decent sound quality.

When choosing between the Nest Mini and Echo Dot, this will probably depend on whether you prefer Google Assistant or Amazon Echo. Whichever you were to choose, youŌĆÖll be getting a feature-packed smart speaker at a very low price.

As we've noted above, Google's contextual powers make Assistant a slightly smarter than Alexa, which is especially helpful if you and your family/roomate are entrenched in the Google/Nest ecosystem. These devices, ultimately, are a way for you to buy into these systems or extend the assistants around your home, so have a look what works with Google Assistant first.

Functionally, we think the Echo Dot is still a better purchase for a lot of people right now thanks to its wider support for smart home products, that 3.5mm jack and near parity in terms of feature sets. Amazon is also catching up to Google in advanced voice capabilities like special voices and whisper mode. The new design and improved sound also mean the Google Home Mini feels a little dated.