Nanoleaf essential guide: Getting started with the smart lighting kit

Everything to know about the statement lights 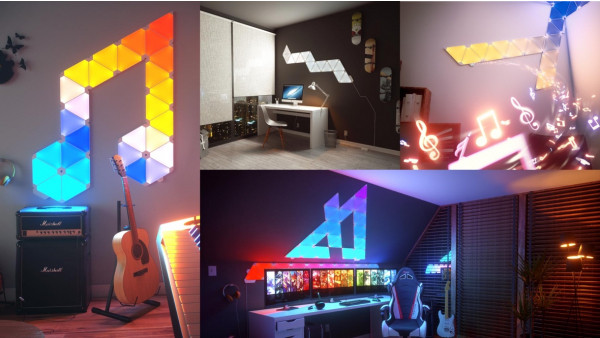 Nanoleaf is different to your standard smart lighting. There's little emphasis on bulbs here, with light panels and customizable designs the headline act, instead.

After starting out as triangles, Nanoleaf has now expanded its collection to include squares - through Nanoleaf Canvas - and will be dropping Nanoleaf Hexagon before the end of 2019. All will stick around your walls, ceilings and wherever else you can place the sticky tabs, but there's plenty more to learn about each lighting setup.

To help you get started, we thought we'd break down what the smart home company's all about, which lights are in the ecosystem already and the accessories you can add to enrich your setup.

Nanoleaf was founded in 2012, with offices in Shenzhen, Toronto and Paris, and so far it's been focused on doing one thing ŌĆō personalized lighting experiences.

To start with, choose one (or a few) of the smart lighting devices from the list below. As you'll see, most of the panels are statement pieces that you'll need to think about where to place ŌĆō on a feature wall, up the stairs or around your desk - more than you would with a bulb or lamp.

The panels also need power from a wall socket, so you'll need to think about how to hide cables, too. Installation, on paper, is very straightforward. No screws are required, with Nanoleaf instead connecting through 'Linkers' and sticking to your wall through adhesive sticky tabs.

The company also sells flexible versions of these linkers so that the panels can bend around wall edges, and has its own app for setup, on-screen controls and scenes, as well as its own controller, the Nanoleaf Remote.

Its main smart lighting rivals, when it comes to showy connected home lighting, are Philips Hue for smart bulbs, lamps and LightStrips, and Lifx - particularly for its similar Tile and Beam range. However, as we said up top, this is a very different smart lighting proposition.

Does Nanoleaf work with Alexa, Google Assistant or Apple HomeKit?

This is Nanoleaf's current modular, color-changing lighting panel, previously known as Nanoleaf Aurora, and the starter kit now comes as a Rhythm Edition - meaning it can listen to your music in real-time and respond with light. The starter kit gets you nine triangular panels, a base station and the add-on Rhythm module (see below).

After that, you can buy extra panels separately (again, see below) and there are also bundles of 15 and 30 panels. In the Nanoleaf app, you can create, share and switch between themes, both static and animated, set schedules and light alarms and change the hue, colour temperature and brightness of individual panels.

This is the latest version of the light panels, which comes with square panels, rather than triangles. There's still all the same features and compatibility, though, and up to 1,000 Canvas panels can be connected in one space. There's even built-in Rhythm support, so you won't need the add-on module that the Nanoleaf Light Panels require.

Another cool thing about the Nanoleaf Canvas is that the panels are touch-enabled. This basically means that you can tap on the squares and play some games. So, you'll be able to load up a version of Simon, Whack-A-Mole and even Pacman, right there on your fancy wall.

In Q3 2019, you can look forward to a mounting grid for the Canvas that'll make it much easier to set up, too. Right now, it's a bit of a hassle, and, as you can read in our full review, you'll need a couple of people to help you out when sticking them to your wall.

Nanoleaf also has a few smart lightbulbs in its collection. The Nanoleaf Smart Ivy is a $9.99 design lightbulb that comes in 'love' (bright pink with hearts), 'leaf' (leaf patterned) and black models, as shown above. It can be controlled via the app, the Apple Home app, Alexa and there's Zigbee on board, too. The Smart Ivy requires a Nanoleaf Hub, which you can get as part of a Smarter Kit with two smart bulbs.

That same signature look continues in Nanoleaf's affordable and environmentally friendly Classic series, which includes the Nanoleaf One and Nanoleaf Bloom, both of which you can get as an E27 or B22 bulb. Both of these lightbulbs are made from folded PCB and have a huge 30,000 hour lifespan. There's no app or voice controls here, but the Bloom uses nifty programming and switch controls to make it a dimmable lightbulb that, well, doesn't need a dimmer.

Nanoleaf also has two lighting fixtures for showing its light bulbs. There's the $44.99 Pendant, which comes with an inline dimmer switch and hangs from the ceiling, and the $59.99 Lamp Base, which is a block of wood with a light switch.

The Nanoleaf Remote not only controls Nanoleaf lighting, but it also works as an Apple HomeKit controller. It's a truly unique dodecahedron Remote that connects to your tech over Bluetooth. It works so you can set each of the remote's 12 sides in either the Nanoleaf or the Apple Home app. You need a Rhythm module too, though.

If you bought Light Panels before the announcement of the Rhythm module, don't panic - you can also buy it separately as an add-on. As you'd expect, it turns your smart lighting into a real time, colour changing music visualiser. You'll need the panels themselves to get going though, obviously.

Nanoleaf's Linkers are an essential cog in your wider design, and you'll need to stock up on more if you plan on building out your collection with the expansion packs, detailed below, or you messed up the first time around.

It's critical to note that these Linkers come in two different variations - Rigid Linkers and Flex Linkers. The stiff linkers will only allow you to link panels on the same wall, while the bendy linkers, shown above, will let you wrap your design seamlessly around walls or even onto the ceiling.

Rigid Linkers will work for both standard Nanoleaf panels and Nanoleaf Canvas, while you'll need specific Flex Linkers for the Canvas and different ones for standard panels, which you can buy here. Oh, and Flex Linkers will cost $1 more for a pack of nine - just so you know.

Once you begin spreading Nanoleaf onto your walls, you may not be able to stop, with endless potential existing for both the standard kit and the Canvas. Unlike Lifx, you can add to your design over time with Expansion Packs, which come in sets of three, 15 or 30 panels.

It works out at roughly $20 per panel, and it's probably best to map out your expansion design before you buy. Also, obviously, keep in mind that you have to add the same shape to your current design - no mixing and matching is allowed.

Announced at CES 2019, Nanoleaf's latest wall panels are Hexagons. Six sides enable much more combinations than the four on the Canvas and three on the Tiles. You'll get up to 500 Hexagons per Control Hexagon, but you'll need extra power for every 25 Hexagons. Even better, they'll be touch enabled, like the Canvas, so you can play games.