Sonos Roam versus Sonos Move: What Bluetooth Sonos speaker is right for you? 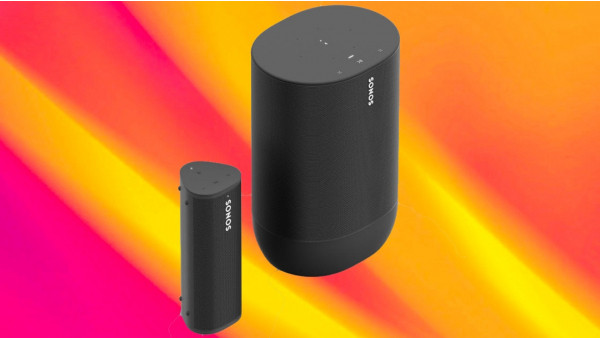 Sonos has just taken off the covers of its cheapest, smallest speaker yet - the Sonos Roam.

The Roam is a Bluetooth, portable, Sonos speaker - but it isn't the multiroom audio speakers first model that fits that description.

The Sonos Move, which went on sale a couple of years back, was actually the first Sonos speaker to pack Bluetooth and battery capabilities.

But how does the new option compare to the original?

Read on for a head-to-head of the Sonos Move and the Sonos Roam.

The Sonos Move is a lot, lot bigger than the Roam. Sure, both speakers are portable in the fact that they can be powered by a battery for wire-free music out and about but, just look at them side by side: there's only one that's really going to fit into your bag for a trip to the park, beach, gym... wherever you want.

In comparison, the Sonos Move is 10-inches tall and weighs more than 6x what the Roam does at 6.6lbs.

Therefore, if you're looking for a speaker to take out to places then there's only really one option and it's the Roam.

However, don't be writing the Move off as a portable option just yet - that size allows it to pack in that all-important battery and a much better sound than the Roam; although we'll come to that in more detail in a bit.

The Move is a perfect speaker for the garden where you might want big sound, but don't necessarily have the wiring in place.

Both speakers are also great options to get a Sonos in the bathroom, where you might not be able to wire in a Sonos One, for example.

However, the Roam is, again, slightly the better choice if that's your objective as it is IP67 rated, which means it's fully dustproof and waterproof in up to a meter of water for up to 30 minutes; so a bit of splash from a shower shouldn't do it any harm.

The Move has a slightly inferior IP65 water and dust resistance, but anything short of a full-on water dunking should pose no problem.

The Move also has a rubber bottom to give it a sturdier base for standing on whatever surface is available, and that's particularly useful for outside where it might be placed on grass, mud, or any other dirty or uneven surface.

The Move's back button area is recessed into the speaker, creating a handle you can use to pick the Move up and carry it around.

The Roam can sit vertically when you've got a nice even surface for it but it can also be used horizontally as well, for when it's going to lie on something a bit less sturdy.

The Move has the familiar Sonos touch buttons up top, giving control over volume and the microphones, as well as play and pause. The Move also has a power button and Bluetooth button on its rear, to let you turn the speaker on and off, or connect it to a new source while on the go.

In comparison, the Roam actually has physical buttons, shaped as per the function they perform; play/pause, volume up and down and microphone muting.

The Sonos Move is a portable Bluetooth speaker and Wi-Fi smart speaker in one. You can take the speaker out and about, and expect 10 hours of playback use before needing to recharge it.

And now, to repeat ourselves, the Sonos Roam is also a portable Bluetooth speaker and Wi-Fi smart speaker in one. You can take the speaker out and about, and expect 10 hours of playback use before needing to recharge it.

However, it actually trumps the Move on the Bluetooth front as it can use both Bluetooth and Wi-Fi at the same time.

That's not a feature that's available (at the moment, at least) for the Move, where you have to make a choice between Bluetooth or Wi-Fi mode. You can't have both.

However, you might not even need Bluetooth with the Move as Sonos has given it a really good Wi-Fi range, so there's a chance you'll be able to take it into the backyard and still run it on your Wi-Fi.

When using the Wi-Fi, both the Roam and Move become part of your regular Sonos system and will show up in the Sonos S2 app, just as a non-portable Sonos speaker would.

Switching to 'just' Bluetooth mode, on either speaker, means that some features stop working. The Sonos app will become useless, for example, and Google Assistant/Alexa will go mute. At this point they become, well, just Bluetooth speakers.

Another nifty feature that's present on the Roam but not yet available on the Move, is Sound Swap, where you are able to fire the audio from your Roam to a nearby Sonos speaker by simply holding down the play button.

This is a brilliant feature for when you're taking the party indoors and you want the music to carry on, on your better speakers. Sonos uses the ultrasonic frequency of nearby speakers to work out what the best speaker is to Sound Swap with.

The Sonos Move brought an evolution of Sonos' Trueplay feature to the table when it went live: Automatic Trueplay.

If you have ever set up a Sonos speaker before, you'll recall the somewhat-strange process of walking around the room waving your iPhone around to tune to acoustics, like some sort of audio exorcist.

Sonos built that technology into the Move, so it adjusts dynamically to its surroundings, registering all of the different reflection patterns of each individual space (this can be turned off if you'd prefer).

And the good news is that the Roam also boasts Automatic Trueplay, meaning that it will adjust its sound profile on the fly, ensuring it's optimizing the sound at all times.

It's a great feature, and is a far easier way to get better sound. And the good news is that it works on both Bluetooth and Wi-Fi modes now, following a software update that recently hit the Move - it will work with Bluetooth on the Roam straight out of the box, at launch.

As you can see, there's a whole lot of common ground between the Move and the Roam. Both feature the gamut of Sonos connectivity ŌĆō from joining your Wi-Fi network of multi-room speakers to AirPlay 2 and the ability to pair two units for stereo sound (in Wi-Fi mode).

Both Sonos portable speakers both have smart assistant functionality built in, with either Amazon Alexa or Google Assistant available according to preference.

It's worth noting, though, that the smart assistant features are Wi-Fi dependent as they need the data to work.

As mentioned, both speakers have a 10 hour battery life.

Both speakers are capable of entering a low-power mode, automatically after 30 minutes of non-use. Sonos states that the Move will last for five days in this mode, it's up to 10 with the Roam.

The Sonos Move comes boxed with a charging dock that juices it up as soon as you place it on top.

Unlike the Move, the Sonos Roam doesn't use a proprietary charging input; it's a USB-C that juices it up.

There is an optional charging dock that costs $49 - but the good news is that the Roam is Qi compatible, so you'll be able to get a much cheaper wireless charger for it. The native one has a magnet though, for optimal stability.

You've probably guessed this already from just the sizes of the two speakers but, when it comes to sound quality, there's a big gap between the Sonos portable brethren.

While the Sonos Roam is said to punch well above its diminutive form-factor, it just won't be able to compete in terms of audio hardware with the much more powerful Move.

The Sonos Move actually has the same mid-woofer driver as the Sonos FIVE, along with two Class-D digital amplifiers and downward-firing tweeter.

With the Roam, you're looking at a pair of class-H amplifiers, a custom racetrack mid-woofer and a tweeter all built in.

You might be noticing a theme here - there's also a pretty significant difference when we consider the prices of the Sonos Move and the Sonos Roam.

The Move costs $399, which is expensive from pretty much every angle. It's a heck of a lot for a Bluetooth speaker, and a serious whack for a smart speaker.

Then again, it's both of those things, and is pretty close to best-in-class in both categories on the performance side, which is also quite a boast.

The Sonos Roam by contrast is priced at $169, less than half the price of the Move ŌĆō so for the price of one Move you could get a paired stereo set of Roams, and be left with some change in your pocket.

However, that extra money does, of course, get you a much better Sonos speaker, so it's totally dependent on your individual use-case.

Sonos Move v Sonos Roam: Which is the best?

The Sonos Move was an early sign of a pretty radical new strategy from Sonos, moving out of the home and into a market that it previously spent a long time ignoring.

The Move has superb audio smarts, a great build quality, and plenty of adaptability. Being able to rely on brilliant sound in your home, in parks and on camping trips is great, and its arrival a couple of years back opened up a whole new world for Sonos.

If you're looking for a high-end Sonos speaker that can be used inside and outside the home, then it's definitley the top pick. But, but, at $399 it's currently a pricey choice.

But the feature set is pretty much identical - in fact, the Roam is a tad more smart thanks to Sound Swap and that dual Bluetooth / Wi-Fi setup... features we expect to land on the Move in the future, however, through software updates.

The Roam is also much, much more portable. It's the only Sonos speaker that can realistically be taken out and about without being a burden.

So, while the speakers have plenty of similarities, it's very much a horses for courses scenario when it comes to choosing between them; do you want a great sounding, top-tier Sonos speaker or do you want a decent Sonos speaker that's easy to carry around?