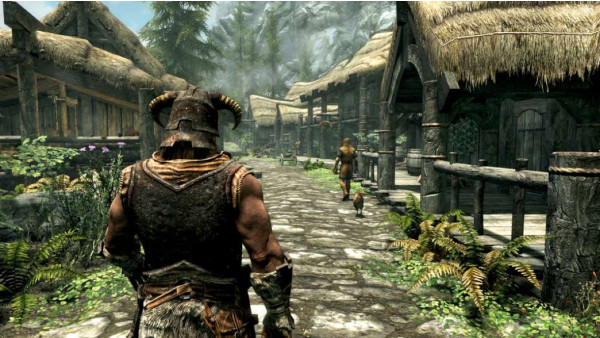 Here's something the world didn't know it wanted - Skyrim: Very Special Edition for Amazon Alexa and Echo. Yes, it's not a prank but a fully working Alexa skill that lets you play a voice assistant port of The Elder Scrolls V.

And it's pretty popular - people are actually playing it and the free to play Skill has an average of 4/5 stars from users. Skyrim on Echo is an odd experience - man, Alexa's tone of voice gets annoying after a a while - but if you're a Skyrim superfan or completist, there's plenty here for you to get on board with in terms of references and Easter Eggs.

We won't spoil your fun by giving you a run down of everything in store but here's how to get going plus some tips and tricks.

How to play Skyrim on Echo

To get going, you'll need to enable the Skyrim: Very Special Edition Alexa skill which you can do by saying "Alexa, open Skyrim" to your Amazon Echo smart speaker or other Alexa-enabled device. That's it, no clicking or downloading.

After that you'll be able to say "Alexa, play Skyrim" at any time and it will pick up where you left off in the story. To stop playing just say "Alexa, stop" and the assistant will sign off with a "Safe travels, adventurer". Easy enough.

Side note: You don't actually need an Echo or Alexa device to start playing this voice command version of Skyrim - just download the Amazon app for iPhone or Android and tap on the Alexa button - the speech bubble icon - then follow the same instructions as above.

Playing Skyrim on Echo is just a case of er, listening up - Alexa will guide you through the game like it's reading out onscreen RPG instructions, similar to how other voice based Alexa game experiments, from the likes of Earplay and the BBC have done things.

A bunch of the time you'll be choosing from only multiple (we're talking two to four) options such as where to go next "Lush plateau or white ridge?"; whether or not to help elves and, of course, "Attack with weapon, cast spell, use shout or flee." Just remember - a powerful warrior would never flee.

In answer to these, you don't need to use the Alexa wake word each time, just answer - and use the whole phrase to make things easier. We were pretty disappointed that Alexa does the "Fus ro dah!" shouts for you after you've selected "Use shout", though, or at least it does in what we've played through so far.

Alexa keeps you updated on how much damage you take with each strike and your health percentage after battles with mud crabs and suchlike and also gives you alerts on what level your skill with arms or shouts are. There's some sound effects but it's mostly just Alexa telling you a lovely story along the lines of "You have triumphed".

As we said, Alexa does get a little grating and it doesn't work quite so seamlessly back and forth as when Keegan Michael-Key plays it in the promo. So it's best to play in short bursts and come back to it - you can start and stop in a matter of seconds making it a fun way to kill time without looking at screens.

While playing, you'll no doubt have the original game's visuals in your mind but it's also kinda cool to use your imagination when it comes to you know, spiders and cheese wheels.

If you don't need any more persuading, just get playing. If you want to know more of what to expect (the Stones of Barenziah..), you can get a sneak peek at what the Very Special Edition includes by going to its Alexa skill page.

Have you been playing Skyrim on Echo? Let us know in the comments.