How to get Amazon Alexa in your car: Echo Auto or... Echo Dot (seriously)

Getting Alexa in your car is easier than you think 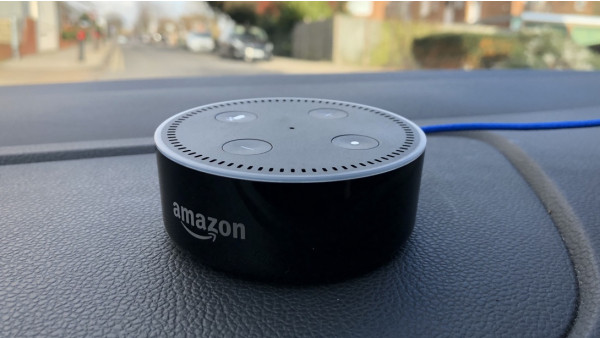 Voice assistants in the car are now big business, and we're seeing companies try to get Amazon's assistant into your vehicle in a handful of different ways.

There are few notable examples already available to purchase, with Echo Auto being the obvious answer. Garmin's Speak is another option; it fixes onto the windshield and brings Alexa voice commands into the car, as well as navigation help from the sat-nav specialist.

And then there's the Roav Viva, which plugs into your car's cigarette lighter and gives you a direct line to Amazon's assistant.

However, we're not here to talk about them - we're here to get your Echo Dot working in the car, meaning you don't need to fork out for a dedicated device.

Did you know that the Echo Dot will work just fine, piggybacking off of your smartphone's cellular data? Handy if you've got an old model lying around.

Getting your Echo Dot connected in your car

The first thing to do is to change your Echo Dot's Wi-Fi network from your home to the hotspot address of the smartphone you want to use for tethering.

To do this, fire up the Alexa app choose Devices at the bottom and tap on the Echo you want to move into your vehicle.

You'll then be jumped over to Echo Dot setup page, where you simply need to follow the screens, make sure your phone's hotspot is enabled.

If you don't see the orange light appear on your Dot, press and hold the action button until the light ring goes orange. You'll then need to temporarily connect to the network your Dot is broadcasting, then just select your phone's hotspot name and enter the password.

That's it - you're done, your Echo Dot is now using your phone's 3G or 4G data, instead of your home's Wi-Fi. You might want to change the name of the Dot to Echo Car, or something along those lines - something that's easy to remember.

Now, it's just a case of putting your Dot in your car. The Dot actually has a non-slip base, and we haven't had any issues of it moving around on our car's dashboard - but you might want to secure it with some sticky tabs to be double-safe.

Obviously, your Dot is relying on your phone's connection now, so if your phone's data cuts out, your Echo won't work. However, with 3G and 4G coverage being so widespread nowadays, you shouldn't run into many problems.

The final point (and, again, this might be an obvious one): there's no battery in your Echo Dot, so it will rely on your car giving it power. Luckily, this is easily achieved using a standard Micro USB charging cable plugged into your car's 12v port.

Once you've done the above, you're actually all good to go - after all, the Echo Dot packs a meaty little speaker for its size - so you'll have no issues interacting with Alexa on the go.

However, don't forget that the Echo Dot is also capable of pairing up with Bluetooth speakers, and many car stereos now pack Bluetooth connectivity. So, if you're going to be streaming music or internet radio using your Echo Dot (beware those data charges/limits, but more on that below), you might want to pair up to your car's speakers.

All Bluetooth speakers have a slightly different pairing process, but it will be along these lines to get it sorted:

1. Turn on pairing mode on your Bluetooth speaker, fire up the Alexa app and go to Settings.

2. Select your new car Dot, and then select Bluetooth then Pair a New Device. When your Dot discovers your car's speaker, tap that name. Your Dot should then connect to the speaker and Alexa will tell you it's all paired up.

Great Alexa skills and commands for your car

Obviously, one of the big selling points for devices like the Garmin Speak is navigation help. There's no skill that replicates that on the Dot, unfortunately, but there are a ton of great reasons to have Alexa in the car. Here are the ones we're using the most - you can obviously apply the actions to your own smart home and personal favourite apps, too.

How much data is Alexa using?

Obviously, doing any of the above is going to eat some of your smartphone's data plan. How much, exactly, depends on what you are doing with your Dot in the car.

If you're just asking questions and throwing in a few smart home commands, your data shouldn't take too much of a hit - although be aware that any Echo device is always checking in with the Mother Ship, sending packets to and from the Amazon servers.

If you're streaming music, then the hit is obviously going to be a lot harder. There's no exact science here but, iHeartRadio streaming for an Echo device is reportedly 384Kbps, which would mean about 173MB of data in an hour's use. If you're playing music from Amazon Music, reports claim that an Echo actually downloads the MP3 file, rather than streaming it - so that's anywhere between 10 and 20MB of data per song.

So, however you plan on using Alexa in your car, make sure you have a cellular data plan in place to cover yourself.