How to use Echo Buttons to start Alexa routines 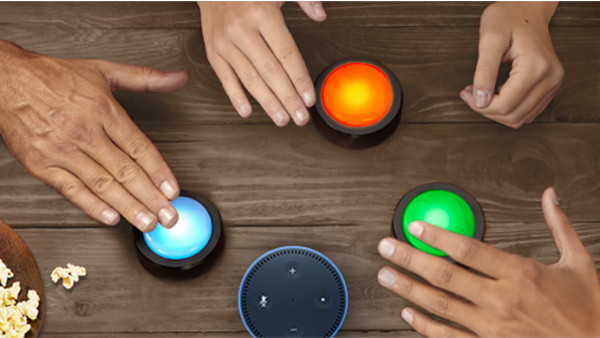 Amazon launched its Echo Buttons a couple of years back, as a way to play games like Trivial Pursuit Tap. This made them a fun, but ultimately novelty device.

All of that changed last year when Amazon enabled the Echo Buttons to trigger Alexa routines, transforming them into dedicated smart home buttons.

Echo Buttons are sold in packs of two and each runs on two (included) AAA batteries. These aren't like other Echo devices that must be plugged in at all times; the idea is that these can be placed anywhere.

And sure, this might seem a tad backwards in any voice-controlled smart home, but the Echo Buttons can be handy in those moments where you don't want to wake up the rest of the house by yelling at Alexa. Also, let's be honest, sometimes it's just easier to press a button, right?

Now that Echo Buttons can power routines, we've put together a guide for getting them set up, as well as dishing out some ideas to try with your new pressy toy.

How to set up Echo Buttons with Alexa

This part couldn't be simpler. First, make sure you've stuck the batteries into your Echo Button (you'll know if it has power by pressing it and seeing it briefly light up blue).

Then tell your Echo speaker, "Alexa, set up my Echo Button". Alexa will ask you to hold the button down until the light turns to orange. At this point, Alexa should recognise the button and you'll be away. Repeat for more buttons.

How to use Echo Buttons to trigger routines

Ok, now for the fun part. For this bit you'll need to go into the Alexa app.

1) Tap the hamburger menu on the homescreen (that's the three lines at the top left)
2) Hit Routines.
3) Tap Create Routine.
4) Select the top section that says When this happens.
5) On the next screen, tap Echo Button.
6) Push the button you wish to pair for the routine. After a brief moment it should light up green and the app should recognise the selected button. Tap Add. Don't worry about the jargon name it gives it, you can change this later.

Your button is officially triggering a routine, but right now that routine doesn't do anything. So we need to add some actions. You should have been thrown back to the New Routine page so go ahead and tap Add action.

There's a lot to choose from here. You can have Alexa make announcements, play music, read the news, control smart home devices and more. Remember you can add multiple actions to a single routine. For example, we made a new morning routine that reads the news, weather forecast and tells us what's in our calendar. It also turns on our bedroom lights.

Have a play around. Remember too that you can trigger smart home scenes within routines. To find those, simply tap on Smart Home in the actions menu and then on Control scene.