Amazon's Dash Buttons are officially dead - and it's all Alexa's fault

Pour one out for Amazon's weirdest idea so far 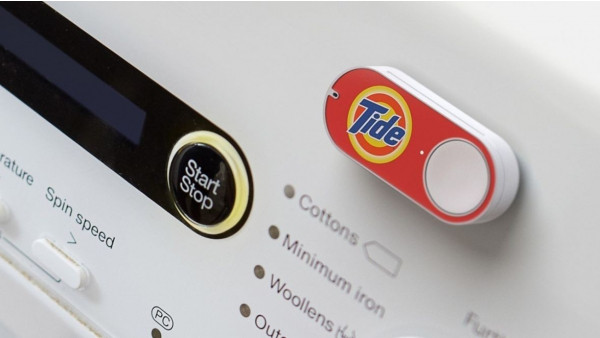 I still remember the day Amazon announced its Dash Buttons. A physical button for reordering supplies, announced just before 1 April. It had to be a joke, right?

Though they certainly became the butt of many jokes, Amazon's Dash Buttons were very, extremely real - but almost four years later, the company is calling time on its weirdest invention. You see, Dash Buttons just don't make much sense in 2019.

The tap-to-order buttons were a way to simplify the process of restocking household essentials, and were available for a range of major brands - but Amazon itself has made Dash redundant over time with the growth of Alexa and its Echo smart speakers. Why push a button when you can ask Alexa to order more Larabars instead?

In a statement, Amazon admitted its part in the murder of Dash: "We've also seen customers increasingly using programs like Alexa Shopping, which provides a hands free shopping experience, and Subscribe & Save, which lets customers automatically receive their favorite items every month."

It's difficult to gauge just how popular the Dash Buttons were (though obviously not enough). In 2017 Amazon was claiming that four people pushed a Dash Button every minute. I'd be interested to know how many of those taps were intentional. I stuck a few in my home for a month and I reckon 90% of the presses were erroneous.

Amazon says it's keeping its virtual Dash Buttons alive for now, and even plans to keep expanding them. It will also honor future orders made by existing physical Dash Buttons, so if you do prefer to restock your kitchen roll with a tap of a button, you can continue to do so. Tap away, friends. Tap away.