Think the Echo Show's ugly? Turn your tablet into one instead 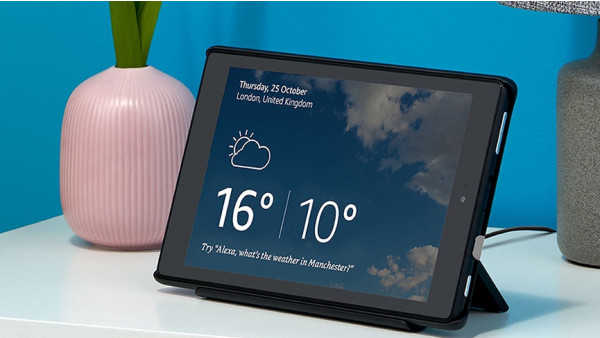 Devices such as the Fire HD 10 and updates to devices like the existing Fire 7 and Fire HD 8 mean that you can already talk to Alexa on these tablets, but the screen must be on or the tablet must be plugged in to power.

The Fire HD 8 also comes with Show Mode and a Show Mode Charging Dock which essentially turns it into an Echo Show in everything but speaker quality (though there is Dolby Atmos here) and a mic array for voice command pick-up.

That means that when you interact with Alexa, the assistant can show you weather, calendar, recipes, videos, news, song lyrics, your Ring Video Doorbell camera feed etc all on screen and with text and visuals that's easy to read from across the room.

You can toggle Show Mode on and off but it's worth noting that as you jump into Alexa skills, you have to say "Alexa, go home" to quit each skill and do something else.

Interestingly, we asked Amazon about adding Google Assistant Smart Display-style smart home controls - e.g. sliders for light bulb dimming - to Show Mode but the response was that voice is more convenient, for now.

We got a few demos of Alexa and Show Mode in action on the Fire HD 8 - everything worked as you'd expect including a Drop In video call. There were a few minor hiccups but Amazon pointed out it has another month before release to iron out the kinks.

The new Fire HD 8 boasts a 1280 x 800 8-inch screen, 10 hour battery life (when it's not in the dock) and there's a 1.3 GHz quad-core processor running the show. There's a 720p HD camera on the front for video calls, and a 2MP camera on the back. It comes in 16GB and 32GB models but you can add up to 400GB of storage via the microSD card slot, which includes storing apps.

The Fire HD 8 is up for pre-order now before the 4 October release. Later in the year, the Show Mode Charging Dock will go on sale standalone for $39.99 for this new Fire HD 8 and the last-gen 8-inch tablet as well as a Fire HD 10 sized dock for $54.99.