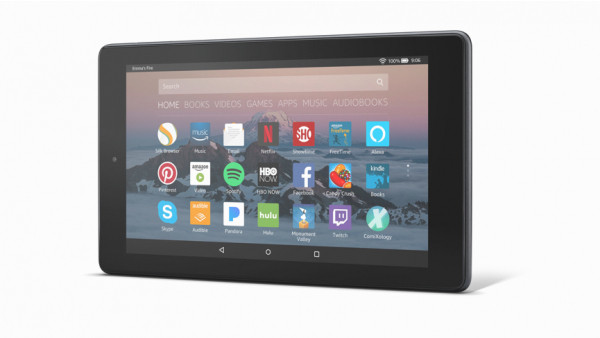 Amazon first announced that Alexa was coming to its Fire HD line of tablets last summer and this week the affordable Fire 7 and Fire 8 HD (2017) tabs are joining the Fire 10 HD in the fun via an over-the-air software update. That means that once you set it up - the option will appear in the quick actions menu or you can go into Settings - you can talk to Alexa whenever the tablet is connected to a power source or when it's being used i.e. the screen is on.

It won't work when it's asleep and unplugged or asleep and connected via USB to a computer, for instance. But you could get a stand and set it up as a smart display when it's plugged in, portable tablet when you take it out.

If you have a PIN or password, you'll also have to enter this before you can say your voice command - so probably a good idea to disable this if you'll use it regularly.

All the Alexa features remain the same, including Alexa calling, shopping and smart home controls. The Alexa app is pre-installed on Fire tablets. It also acts like an Echo Show in that if you ask for info from the internet, it will show you web results from Bing (obviously) and player controls for music and audiobooks will appear on screen.

If you have Alexa devices around the house, Amazon says it will use its Echo Spatial Perception tech to work out which device is closest to you. Older 4th, 5th and 6th generation Fire tablets can run Alexa but not hands free - it requires you to hold down the Home button, not ideal. And any Kid's Edition Fire tablets will have Alexa turned off by default.

Between the popularity of the Echo series, the number of Alexa devices and now Amazon's Fire tablet push, Google's smart displays will need to launch with a bang this summer. Google Assistant landed on Android tablets in December 2017 - we'd love to see it go hands free.