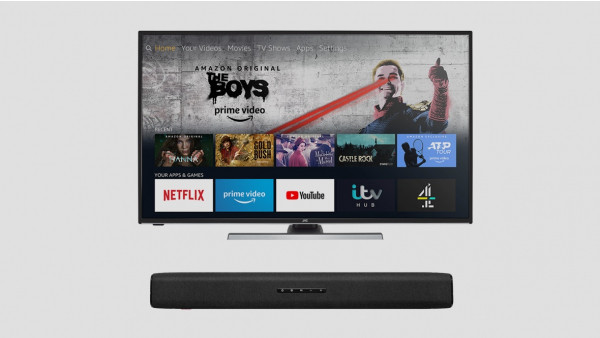 Amazon is seriously stepping up its smart TV efforts, unleashing a range of new sets in the US and Europe, and revealing its first Fire TV-branded soundbar with Anker.

Amazon's previous Fire TV Edition smart TVs have been a big hit, and it's again partnering with Toshiba for a new 65-inch model in the US that comes with Dolby Vision. It will cost $599, and begin shipping in October this year.

Read next: How to control your TV with Alexa

But this time it's not all about America. For the first time, Fire TV smart televisions will be coming to the UK. Working with JVC, Amazon is launching a range of JCV TVs with Amazon's software packaged. They'll be available in 44-inch, 49-inch and 55-inch sizes, with 4K-resolution HDR LED displays.

The TVs come with an Alexa voice remote, meaning that you'll be able to control your TV with your voice and Amazon's assistant even if you don't have any Amazon Echo products in your smart home. They'll start from ┬Ż349 and will be sold through Currys PC World. No word on a release date just yet.

And if you're in Germany or Austria, Amazon has an extra special treat for you: an OLED Fire TV set, built in partnership with Grundig, that bakes microphones right into the set for Alexa control. There's a version without the mics if you don't like the idea of it, but this also marks the first OLED offering in Amazon's Fire TV partner range, which has until now stuck with LCD.

A smart TV is all well and good, but it's pretty rare to find a TV that couldn't benefit from a soundbar. The likes of Sonos' Beam and the Polk Command Bar have shown how useful it can be to have Alexa built into the speaker for your television.

Amazon has decided to take some of the market for its own, working with Anker to create the Nebula Soundbar Fire TV Edition. The soundbar packs a Fire TV system into its internals, negating the need for a separate streaming box or stick. It's a slight shame, though, that it only has near-field Alexa voice control to let you command your TV at will. It will work with a Voice Remote to let you make your orders from the sofa.

You'll be able to add the soundbar to a multi-room music group in the Alexa app, too, making it part of your smart speaker set up in its own right. Amazon isn't yet supplying technical details of the hardware, though.

The Nebula Soundbar is available to pre-order now, ahead of shipping on 21 November, and will cost $229.99. It arrives alongside the new Fire TV Cube, which Amazon has upgraded for 2019.