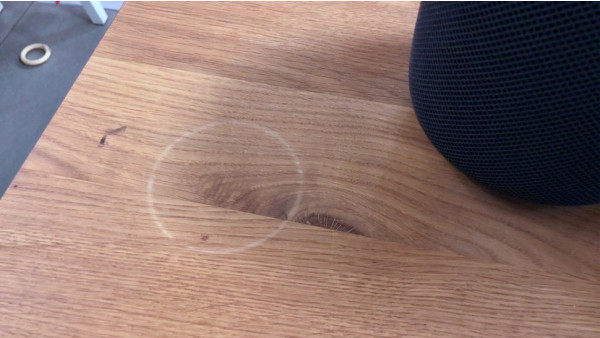 The Apple HomePod is already facing its first controversy - does it respect wood? Does it revere wood? Is it considerate of wood?

Tech reviewers are posting images and stories about Apple's new Siri-powered smart speaker leaving white rings on wooden surfaces and Apple has confirmed the issue, updating its HomePod help page with suggestions such as placing it on a different surface and re-oiling the furniture.

Now Paul Lamkin in The Ambient's review moved his HomePod around his house on various surfaces and shelves and hasn't seen any white marks so far. But reviewers at Pocket-lint (image above) and The Wirecutter as well as various Twitter users have posted evidence of the white rings. (The hashtag is, of course, #ringgate).

Read this: Apple HomeKit - everything you need to know

Also worth pointing out is that we haven't experienced this problem with any other smart speaker though there are a few stray instances of people posting online about white marks from an Echo Dot.

In the tech debacle rankings, this isn't in the league of Samsung's exploding phones or Apple's first roll out of Apple Maps but it does remind us of Fitbit and Apple's problems regarding rashes and burns suffered by owners of their wearables. It's not enough to recall a product, say, (we don't know yet if all the units are affected) but for those with white marks on their furniture, this could really sour their opinion of the device.

If you're buying the HomePod, which is more polished and more expensive than rival smart speakers, chances are you're pretty conscious of the aesthetics of your home making this particularly annoying. Especially if it's a stain on an antique table and not some low-grade wood.

That just leaves one question for Cupertino, which delayed the HomePod from late 2017 - how'd that happen?

It is not unusual for any speaker with a vibration-damping silicone base to leave mild marks when placed on some wooden surfaces. The marks can be caused by oils diffusing between the silicone base and the table surface, and will often go away after several days when the speaker is removed from the wooden surface. If not, wiping the surface gently with a soft damp or dry cloth may remove the marks. If marks persist, clean the surface with the furniture manufacturer's recommended cleaning process. If youŌĆÖre concerned about this, we recommend placing your HomePod on a different surface.

Have you found any white rings or marks from the Apple HomePod? And have you had success getting rid of them? Let us know in the comments.