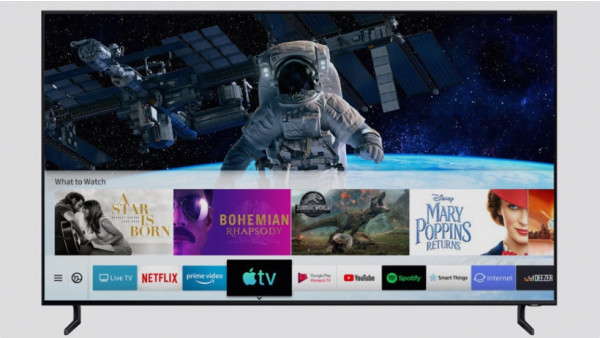 The redesigned Apple TV app has just rolled out, and with it comes support for Samsung smart TVs, marking the first time Apple's streaming app has been made available on devices beyond its own. Not just that, those Samsung TVs are also getting support for AirPlay 2, Apple's wireless protocol.

Both the features arrive via a firmware update to all 2019 Samsung smart TVs and "select" 2018 models (there's a list available on Apple's website). Users will then be able to select the Apple TV app from the Samsung dashboard, and it'll also work with Samsung's Universal Guide, Bixby and search function. You'll also be able to access all your rented and downloaded iTunes content in the app.

For those of you already using Apple TV, the more interesting news is the introduction of Channels, a new feature that lets users put all their favorite shows and services in one place, meaning they won't have to jump from app to app. This will be available on the new app across all devices powering the new Apple TV app.

And later this year, Apple's streaming service for original programming, Apple TV+, will also arrive for the app, meaning Samsung smart TV owners will also be able to make use of it.

As for AirPlay 2, the rollout means you'll be able to beam content from other Apple devices straight to your Samsung TV. More TVs will be getting AirPlay 2 and even HomeKit support (one thing you won't get on Samsung's TVs) later this year, including those from LG, Vizio and Sony.