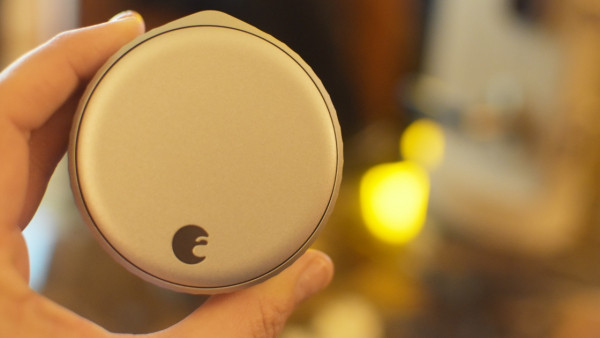 The TVs may be getting bigger at CES, but in the smart home things are going in the opposite direction. Smart lock leader August announces its new Wi-Fi Smart Lock, a completely redesigned version of its iconic retrofit smart lock that is almost half the size and 20% slimmer than the August Smart Lock Pro.

The Ambient got a look at the new lock and not only is it much more compact than the original August, but itŌĆÖs smarter too, with its own built in Wi-Fi, so no need to plug in the August Connect for remote access.

This move toward simplicity and compact design is key in the smart home, if it's to gain larger adoption.

August co-founders Jason Johnson and designer Yves B├®har were on hand to demonstrate the new lock, which comes in the same matt black and silver finishes as the original locks... this is the 4th-generation if you're keeping count.

The new design sports a softer surface, rounded edges and textured ridges for a more solid feel when you open and close the lock manually. A new small ridge on the lockŌĆÖs outer ring also helps you see at a glance if the lock is locked or not.

ŌĆ£We've always wanted to make it this size, now we have the technology," Johnson told The Ambient. "This is part of being a part of the world's largest lock company [August is owned by Assay Abloy]. We literally have thousands and thousands of engineers to help us improve our products.ŌĆØ

Now closer to the size of a door knob, the lock definitely blends in more with traditional door hardware. ŌĆ£People care a lot about design and want technology to sort of disappear,ŌĆØ says Johnson. ŌĆ£So we've worked very hard to make it smaller.ŌĆØ

They did this with a smaller motor drive train sporting the same amount of power and a new battery compartment with just two CR123 batteries as opposed to four AAs.

All other features are the same as the third-gen lock, including compatibility with Alexa, Google, HomeKit, DoorSense technology and the proximity open and close feature.

Pricing and a release date are still unknown, but the August Wi-Fi Smart Lock isnŌĆÖt replacing its third-gen sibling, so our money's on that one coming down in price (currently $229) and the Wi-Fi lock coming in somewhere around $249.

Yale, AugustŌĆÖs sister company, also unveiled its newest innovation today. The Linus Lock is a retrofit smart lock that works with up to 90% of locks globally (outside the US). Also designed by Yves B├®har, the lock has a sleek, yet practical design in a brushed metal finish (also silver or black).

It's substantially larger than the August, more like a replacement door lock in size, a necessity to confirm to the many different lock types throughout Europe and other parts of the world.

"As a native of Switzerland who now lives in California, I am excited to finally bring this technology to Europe,ŌĆØ says B├®har.

The Linus Lock requires a Yale Connect Wi-Fi Bridge but otherwise has all the same features and capabilities of the August Wi-Fi Lock.

It will work with HomeKit, Google and Alexa, connects to the DoorSense technology so you know if your door is open or closed remotely, and auto-unlocks on approach if you want.

Pricing is still being finalized but we're told it will be somewhere in the Ōé¼249 region, without the bridge.

Yale is also trialing in-home delivery, along the lines of Amazon Key's offering.

The company also showed off three other lock-enabled products powered by August tech.

These products all have the same integrations and features as August and Yale's door locks, and will launch this spring.