BenjiLock Fingerprint Door Lock is a smart lock without the smarts

This lock uses biometric entry but ditches Wi-Fi and Bluetooth 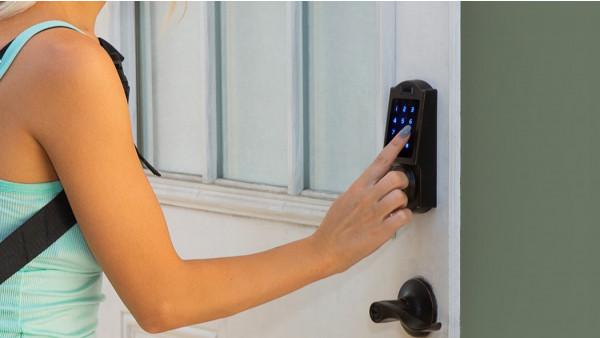 If you love the idea of ditching your keys but aren't keen on putting your front door online the only option was to get a clunky keypad door lock. Until now.

Building on partner BenjiLock's line of fingerprint-enabled padlocks and bike locks, security hardware company Hampton has developed a smart lock without the smarts.

Launched at CES this week, the BenjiLock by Hampton Fingerprint Door Lock is a sleek, smart lock-styled door lock that can be opened three ways: by using its fingerprint sensor, by entering a numeric code, and by a traditional metal key.

It can't be opened by your phone.

In fact, while Hampton debuted a similar lock with smarts built in at CES 2020, it delayed that model in favor of one specifically designed to operate without the need for Wi-Fi or Bluetooth.

It's powered by 4 AA batteries and without a Wi-Fi signal draining them, they should last around a year.

ŌĆ£Many consumers want a next-generation keyless door lock, but are wary of connecting it to Wi-Fi or Bluetooth,ŌĆØ said Kim Kelley, CEO of Hampton. ŌĆ£We combined the innovative BenjiLock fingerprint sensor technology with our industry-best security hardware to develop a high-tech deadbolt that homeowners can control without an app or home network."

The company says its research for the original smart door lock showed them that while people liked the idea of using their phone to unlock their door, the reality was by the time they got their phone out it already felt too late. Which led them to think the extra connectivity features weren't necessary.

"I'll be still in the car dealing with groceries and my kids will already be at the front door letting themselves in," explains BenjiLock founder Robbie Cabral about the ease of use of the new door lock. Cabral's company, which he founded in 2014, earned national recognition when he appeared on the reality TV show Shark Tank, where Kevin O'Leary invested in the company.

Dispensing with the extra tech also helps keep the price and complexity down, the BenjiLock costs just $159. But no app means a more cumbersome setup process for inputting up to 10 fingerprints and 25 access codes.

You also don't get the ability to lock and unlock your door remotely, add your lock to smart home routines, and see a log of who has been coming and going from your home.

But if those features aren't important to you, the ease of use of this hybrid fingerprint lock is definitely an upgrade from a cumbersome keypad, and light years better for both convenience and security than just relying on a stick of metal.

The BenjiLock By Hampton Fingerprint Door Lock is available now in two finishes from buyhampton.com.