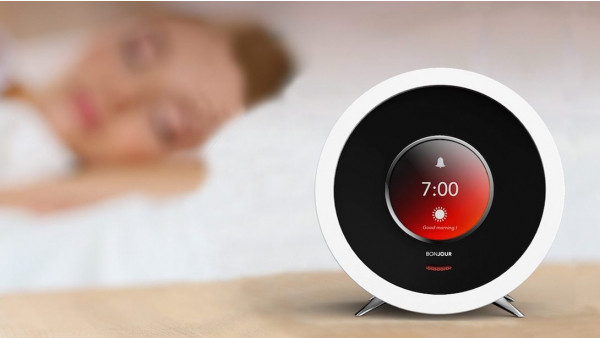 Bonjour, the smart alarm clock that was a crowdfunding superstar back in December 2016, has been delayed... again.

The device, which has had its thunder somewhat stolen by Amazon's Echo Spot, was originally pencilled for June 2017 shipments. It is now expected to land on backers' doormats in April.

The Bonjour team have been out in China at its factory in Shenzhen, overlooking the assembly of the first 200 units and have stated that quality control testing is now happening. That's ahead of sending out these 200 units to beta testers later this month, before mass production starts in March.

When Bonjour hit Kickstarter in late 2016 it raised over $730,000 and was, at the time, an exciting and unique device for backers. Made by Holi, the idea was to make your mornings a bit smarter. Over time Bonjour learns about your preferences and hobbies, and uses its intelligence to proactively change the way your day is planned.

For example, it may detect unusually heavy traffic on your route to work and wake you earlier to ensure you're not late. Or maybe you tell Bonjour to keep an eye on the surf, and it wakes you up early on Sunday if conditions are particularly good - and lets you keep sleeping if they're not.

Bonjour can also talk to other smart home devices like thermostats and lights. If you're getting up earlier than usual one morning it will make sure your Nest fires up the heat earlier too. There's also a display on the front that, when not showing the time, will display things like maps or even a live feed from a security camera, so you can see if the person breaking in is a burglar or just your housemate who's forgotten his keys again.

However, while those features all still sound great there is a great big elephant in the room now - the Amazon Echo Spot - a device that pretty much does all of the above and obviously boasts huge partnerships and compatibility already. Holi states Bonjour will work with Philips Hue, Belkin WeMo and Nest thermostats out of the box - and that many more partnerships are planned... but you'd be harder pressed trying to find a major smart home product that Amazon's equivalent doesn't work with.

Plus, there's the issue of the price. Sure - early backers got their Bonjours (or will have, in April) for under $100 but the suggested retail price is $249. Holi is currently taking pre-orders for $179 but even that's still $50 more than its Amazon rival.

We actually backed Bonjour back in 2016 because, at the time, it would have definitely filled a gap on our bedside table. But while we're still keen to test out the smart alarm clock, it's gonna have to do something special to replace the Echo Spot that's currently sitting in its place.