Just stop for a little second and think about it 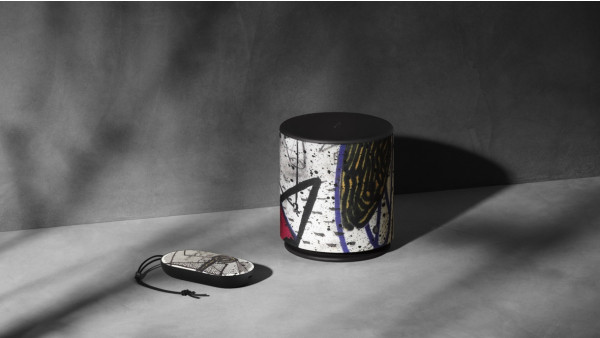 Bang & Olufsen loves limited editions of its speakers - Sotheby's, Kvadrat, Line Friends - you name it, they've collaborated on it.

Enter David Lynch, known for Mulholland Drive, Twin Peaks and the rest, but here he's asking you to consider his 70s and mid-00s prints for your next B&O wireless speaker. We owe him this much.

Read this: The best smart speakers you can buy

Lynch has lent visual artwork and details from both his War Between The Shapes series and Paris Suite lithographs to the Beoplay A9 (below), $750 Beoplay M5 and the $200 portable Beoplay P2 speakers.

Elsewhere, B&O just announced the circular, Michael Anastassiades designed Beosound Edge at IFA, showing it off at London Design Festival, and in August, it announced that the Beosound 1 and 2 are getting built-in Google Assistant voice controls on top of AirPlay 2 and Chromecast built-in.

The Bang & Olufsen x David Lynch Beoplay M5 and P2 will launch at a pop-up shop in MoMa, New York with a UK exclusive for Harrods in London before going on sale online and via Bang & Olufsen shops.

The Lynch printed A9 doesn't have a price but just five models are being made - these will be sold in MoMa's Design Store during the B&O pop-up.