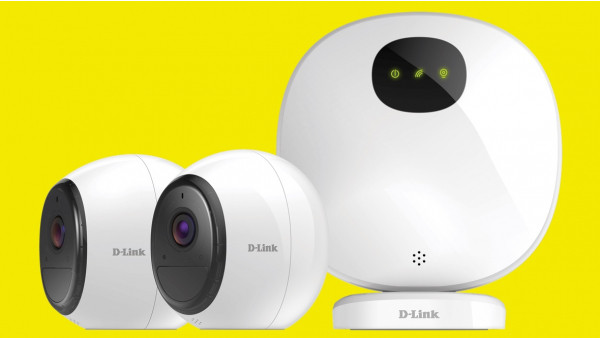 D-Link has unveiled its first wireless camera kit, adding to its current collection of Wi-Fi smart security cameras for both indoors and outdoors.

The Taiwanese company, which also specialises in home networking kit, has a new Pro Wire-Free Camera Kit, which comprises of two cameras and a hub. Up to four cameras can be controlled through the hub at once, and can be moved around the home and outside thanks to the wireless design.

Read this: The best budget cameras for your home

That means the need to drill holes and keep the smart cameras pinned to one point is eliminated, with D-Link indicating that users will get months of operation on a single charge.

So, what about the specs? Well, the pair of cameras in the Pro kit record at 1080p Full HD, with night vision on board, too. Once set up and linked with the companion app, owners can monitor their home through the cameras, with notifications also automatically pinged to a device if any unusual activity is spotted.

D-Link says that the camera's object detection, paired with a passive infrared (PIR) motion sensor reduces the chances of any false alarms, and you can set up alerts if something's moving, rather than the camera simply being disturbed by weather elements, for example.

Of course, like with many other rival camera setups, you'll need a cloud plan for actually recording and storing footage. D-Link includes a 12-month Premium Cloud Recording plan with the kit, which supports unlimited motion-tracked videos for two weeks, while local recording can also be accessed through an SD card.

Once captured, these videos can be played back via the cloud or downloaded onto a device, with the two-way audio enabling people to talk and listen through the camera on their mobile device. As with other D-Link cameras, there's also support with Alexa and Google Assistant, as well as streaming through Google Chromecast and Amazon's Fire TV Stick.

For those looking for a wireless camera setup for their home, the D-Link Pro Wire-Free Camera Kit is now on sale for ┬Ż441.99. There's no word yet on the US price and release date, but we'll update this story when we know more.