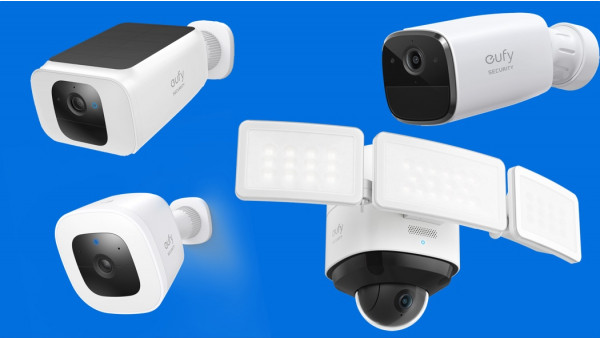 Eufy is breaking free from the hub with its new outdoor security cameras. Announced this week, the SoloCam series features the first battery-powered products from the Anker-owned company to not require a hub.

Instead, these cams go completely solo with on-board storage of 8 GB and a battery that promises 4 months of life (significantly less than their hub-based siblings, which can go up to 12 months).

Plus, Eufy is also adding 90 dB sirens and lighting to the wireless camera line, both of which had been conspicuously lacking from previous models. And, snapshot notifications will finally be supported.

There's the E for Essential, which are the lowest cost, most stripped-down option. They have 4 months of battery life, a built-in siren, the option of 1080p or 2K footage, and are charged via a micro USB cable.

The L for Spotlight adds a 600 lumen LED light panel around the face of the camera lens that can flash to warn off intruders. It also enables full-color night vision and the light's brightness and temperature is adjustable. Plus there's a siren, the option of 1080p or 2K video, and it charges via USB C.

The S for Solar is the most intriguing option. With the same specs as the L line, and including the LED light panel, it also has a solar panel built-in for continuous power and 2K recording.

Here's the pricing for each camera. The E models are available now at eufylife.com, the rest are coming later this summer:

In addition, Eufy announced a new Eufy Floodlight Cam 2 Pro for $299.99. This is a substantial upgrade from the current floodlight camera adding three LED floodlights that generate over 3,000 lumens.

The lights are adjustable both physically and color-wise - able to tune from 3,000 k to 5,700 k. They can also be set to turn on and off automatically with sunrise and sunset scheduling.

The built-in camera is a 360-degree pan and tilt model that can auto-track movement and store any recorded footage to its 8 GB on-board storage. It boasts 2K video resolution and a 100 dB alarm but needs to be hardwired.

Eufy has one more new security product coming this summer - the Eufy Security SmartDrop, a smart lockbox with a built-in camera and face and motion detection capability.

The battery-powered box is made from carbon steel and is 2 feet 3 inches high and 1 foot 9 inches wide and long, giving you plenty of room for your packages.

The built-in camera with AI will provide voice prompts to delivery drivers and there are multiple ways to open it including with a pin code, app, key or push button. No price has been announced yet but it's expected to drop in August.