CES 2019: The new toolkit could lead to some interesting new devices 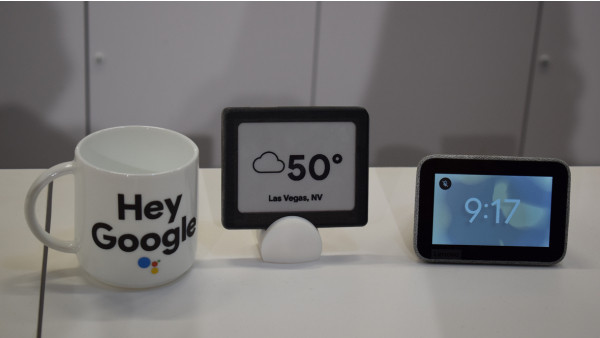 Google just announced that it expects its Assistant to be on one billion devices by the end of January. A billion. But far from resting on its laurels, Google came to CES 2019 to announce a long list of new features, devices and partnerships that will vastly expand the Assistant's reach and abilities.

One of - if not the - biggest among these is Google Assistant Connect, a way for companies to have their devices connect to a Google Assistant speaker using Wi-Fi or Bluetooth, without the need to actually add a microphone or additional brains. This is Google's riposte to Amazon's Alexa Connect Kit, and it will (fingers crossed) usher in a new generation of Google-friendly smart devices.

Devices like the little 3D-printed E Ink display Google had on show in Vegas, showing information like the weather forecast or driving directions. Or the button which, like Amazon's Echo button, could be pressed to start a smart home routine. Neither of these devices were running the Google Assistant on board, but can make use of Google functionality.

Google's trying to build a plug-and-play toolkit for developers, allowing the Assistant to extend its reach to more and more devices - many of which may be cheap accessories that leverage the Assistant for a single purpose. Meanwhile the paired Google smart speaker will do the heavy lifting.

But Google is catching Amazon's lead here, and not an insignificant one. Amazon as already launched an Alexa microwave and Alexa clock to show developers how easily they can build voice assistant capabilities into their devices. It's essentially Alexa on a chip.

This path allows device makers to leave a lot of the work up to Google/Amazon, potentially teasing out a flood of connected smart gadgets. And the more devices that Google can have made, the more it will keep users in its ecosystem. Obviously, Amazon has the same idea.

Google told us we'll learn more about the new platform at Google I/O this year. At the very least, it should lead to some fun and interesting new ways to leverage the Google Assistant. Here's to the next billion devices then.