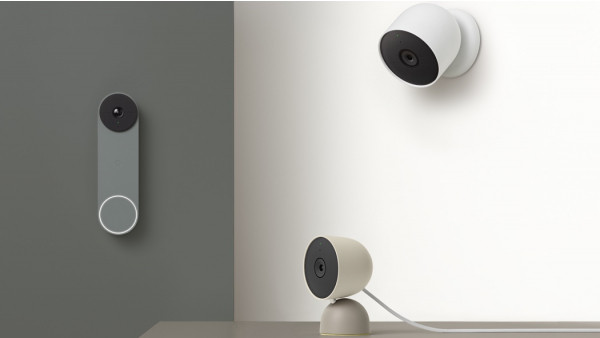 A smart floodlight camera rounds out the line-up, which replaces all the current Nest cameras, other than the excellent Nest Hello doorbell that's sticking around as a wired option.

Overall, the new cameras land in the upper middle-ground for home security. Taking some aspects of Google Nest's expensive but excellent IQ cameras while bumping up the specs of its cheaper Nest Cams to arrive at a decent-looking compromise.

Most noteworthy is that the smart alerts for people, animals, vehicles, and packages, which you used to have to pay a monthly fee for are now free.

The new cameras use on-device machine learning to recognize objects, powered by a new TPU chip and trained on 40 million images. This means no need for expensive cloud processing.

Guide: How much does Nest Aware cost

Previously available in a limited capacity on the Nest Hello and Nest Cam IQ, this on-device processing is now on all the new Google Nest cameras, allowing them to flag for specific motion locally. Nest's facial recognition feature still requires a paid plan.

In our demo, we saw the new doorbell camera catching multiple activities at once, including a vehicle, person, and a package. Most impressively, it was able to distinguish between a person, vehicle, or package being stationary or on the move. You can also now add activity zones without having a subscription.

Google says the colors were "inspired by nature," and that they "drew design inspiration from lighting and architecture to create products that look great together and in lots of different settings."

The Google Nest Cam (battery) is the flagship camera. An outdoor/indoor battery-powered camera that can also be plugged in with a standard or weatherproof cable, the $179.99 device aims for total flexibility and its magnetic mount makes it easy to adjust, remove, and mount anywhere.

This is a slight step down from the now-discontinued Nest IQ Outdoor's 8-megapixel 4K color sensor and 12x digital zoom. But that device cost twice as much.

The camera is IP54 rated for outdoor use and will have the option of a solar panel for charging. Google tells us that the battery will last between one and a half to seven months before needing to be recharged, depending on how much action it gets.

Motion-activated event recording for up to 3 hours and live-streaming is available out of the box, and you can opt for 24/7 video recording if you purchase a power cable and pay for a Nest Aware subscription.

The new Google Nest Doorbell is the company's first battery-powered smart video doorbell, and at $179.99 is a more affordable, wire-free option than the $229 Nest Hello.

The view is 3:4 with 145 degrees, so you get a full head-to-toe look at the action on your doorstep.

These specs are a slight bump down from the Hello, which records in 1600 x 1200, with a 2K color sensor and 8x digital zoom. HDR and 10-foot night vision should mean you can see clearly no matter the time of day.

The doorbell is IP54 rated for outdoor use and doesn't require an indoor chime. You can connect it to your Google Nest speakers to announce when someone is at the door.

Google tells us the doorbell should get between one and six months of battery life, based on how busy your front door is. You do need to remove the entire doorbell to charge it and 24/7 recording is not available.

The Google Nest Cam (wired), is the second generation of its iconic wired indoor camera, which started life as the original Dropcam. It's now Google's only sub-$100 camera, costing $99.99.

Available in four colors, plus one with a wooden base, this Nest Cam is designed to blend into your home a little better than the all-black or all-white options of the previous two indoor cameras from Nest.

You can choose from snow (white), sand (with the wooden base), linen, and fog.

Finally, entering a whole new category is the Google Nest Cam with Floodlight, its first connected floodlight camera, and first foray into any type of lighting, for $279.99.

IP65 outdoor rated with 2400 lumen lighting, this is effectively a Google Nest Cam (battery) stuck on to two floodlights that has to be hardwired. It is also possible to set the camera's two floodlights to only turn on when a person walks by, not for just any motion event.

So, what's missing? We're surprised to see no siren in the cameras, although there is now the option to call 911 right from the app with a Nest Aware plan.

A few of the higher-end features have also been ditched, presumably to save battery life and cut down costs.

This means no built-in Google Assistant in the camera and no 4K video. There's also no word on motion and zoom tracking, which was available on the IQ range. Specific sound detection has been removed too, although Google tells us it will be "coming back soon".

However, the very good news is that Google has moved much of the smarts onto the cameras themselves and out of the cloud. This means features such as person, vehicle, animal, and package (for the doorbell) detection, and customizable motion zones are now free. Plus, you get 3 hours of event video history without having to pay for a subscription.

Additionally, much of the data is processed on-device, which should mean quicker notifications, plus added privacy - as your videos don't have to go up to the cloud for processing.

This on-device processing also means the battery-powered cameras can record up to a weekŌĆÖs worth of events (one hour) if power or Wi-Fi is out. And the wired cams can do the same if just the internet is down.

A $6 a month Nest Aware subscription adds familiar face detection and the ability to call 911 from the Google Home app (U.S. only), plus 30 days of event video history. For $12 a month you can add 10 days of continuous video recording on any wired camera (excpet the doorbell) and 60 days of event history.

All the devices work in the Google Home app and don't work with the Nest app. Yes, we see the writing on the wall there. They also all work together and with Google Nest smart displays, so you can call up a feed by saying ŌĆ£Hey Google, show me the backyard.ŌĆØ

The cameras also work with Google Home routines, including the Home & Away routine where you can use geofencing and sensors to tell if you're home or away and automatically turn your cameras on or off.

Unlike major competitors such as Ring and Arlo, the Google Nest camera batteries are built-in, so they need to be taken down to charge, including the doorbell.

The Google Nest Cam (battery) and the Google Nest Doorbell do both have the option of being plugged in, however, and there's a solar power option for the outdoor camera.

The Google Nest Doorbell can be hardwired to your existing doorbell wiring for trickle charging, in the same way as Ring's battery-powered doorbells. This doesn't enable 24/7 recording, however. If you want that you need to upgrade to Nest Hello.

The battery-powered Google Nest Cam and Google Nest Doorbell go up for pre-order today and go on sale 24 Aug for $179.99 in 18 countries, including the U.S. U.K., Canada, and Australia.

The Nest Cam with floodlight and the new wired indoor Nest Cam are coming later this year.