Astra has Bluetooth on board too, for extra flexibility 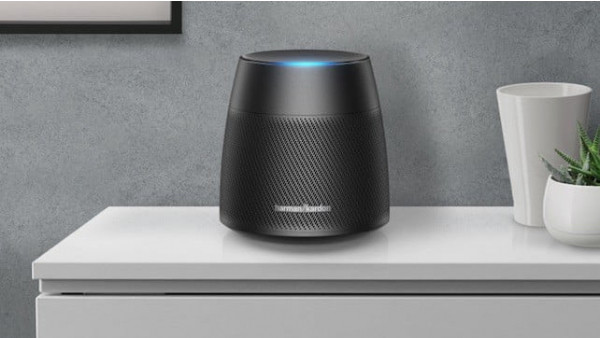 Samsung's Bixby smart speaker is set to launch later this year, and it's already facing tough competition from Apple, Amazon and co. But now there's a new rival to match, one that's a bit closer to home.

The Harman Kardon Astra, announced at MWC, packs in 360-degree sound smarts - just like Apple's HomePod - and has Alexa on board for all your digital assistant queries. In case you didn't know, Harman Kardon is a wholly owned subsidiary of Samsung; the Korean company coughing up $8 billion last year for the group.

The Astra, which boasts three 1.75-inch full-range transducers, three 0.75-inch dome tweeters and two passive radiators, promises an 360-degree omni-directional sound field. Now, the HomePod also offers that but Apple's smart speaker also calibrates itself if 360-degree sound isn't the best setup - i.e. if it's placed next to a wall. There's no word from HK whether the Astra can do this.

What we do know is that there's a 4-microphone array, with advanced noise cancellation, hands-voice controls and, as well as Wi-Fi connectivity for the Alexa features and streaming, there's also Bluetooth on board - so it's more flexible than the HomePod on that front.

This isn't the first Harman Kardon smart speaker though - the Invoke, with Microsoft's Cortana built in - went live last year.

Back to the Alexa-powered Astra and we're told a spring or summer launch is likely, although there's no word on pricing just yet.

With Sonos already selling an Alexa speaker, and Harman Kardon now getting involved, the audio quality for Amazon's digital assistant is definitely on the rise.