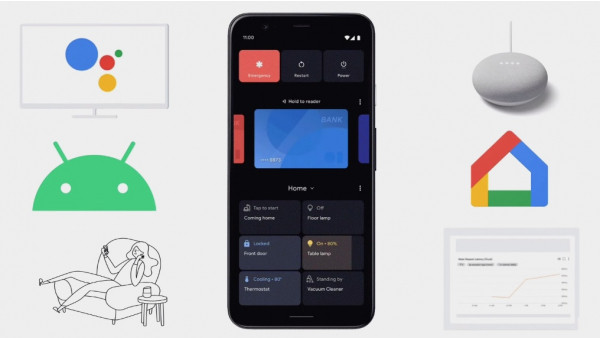 We'll be honest; we had high hopes for new hardware at the online Works With "Hey Google" Smart Home Summit, which is taking place this week.

However, rather than a new Chromecast or Google Home smart speaker the keynote was (maybe predictably given it was only scheduled for 20 minutes and Google made hardly any fanfare about it) very dev focused; there was a lot of chat about Local SDKs, Access Consoles and the like.

The most notable was the new "dedicated persistent space" aspect of Android 11, which is due for release in Q3 2020.

Similar to the HomeKit Control Center in iOS, this provides users with a Google Home Power Menu, which can be summoned with a quick press of an Android smartphone's power button.

The idea is to make it easier and faster to access common smart home controls and settings such as light changes, temperature increases and the like; similar to the sorts of quick controls you get with a Google Assistant Smart Display. Tapping a control will, if applicable, offer up a bigger, more detailed, control panel.

From the Power Menu, if you need to do something a bit more complex, you can easily jump straight into the Home app with one tap of a button.

The next juicy Google Home tidbit from the keynote again mirrors HomeKit (or what's coming soon for HomeKit, at least) with more improved Assistant Routines.

What Google is calling Custom Partner Routines will essentially mean better recommended routines and automations from brands such as Nest or Ring. And brands can team up as well; think a security system telling the smart lights to turn on/off and so on.

Google also detailed improvements to Home & Away routines. Users will be able to group multiple devices and actions into routines that start when they leave their house, or return.

Unfortunately, there was no mention of Google Home users being able to create routines based from a motion sensor; a feature we know is high on a lot of users' wishlist.

These changes are all slated to hit the platform later this year. You can watch the keynote yourself below: