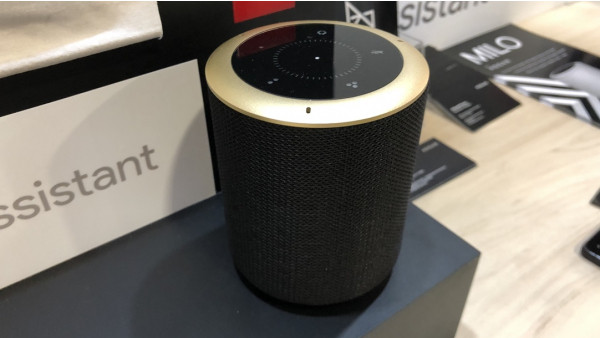 Milo, the new smart speaker from startup Hogar Controls, may have gone unnoticed amongst the hundreds of other Google Assistant devices launched at CES 2018 were it not for one big ingredient... Z-Wave support.

With Z-Wave on board, as well as Zigbee, that means the Milo can also double up as a smart home hub - talking to your various sensors, bulbs and other smart devices in your home, without having to install multiple hubs.

Explainers: What is Zigbee? & What is Z-Wave?

In theory at least - we'd like to test the Milo in the real world; our CES demo was a bit of a let down, but that's not surprising given the vast quantities of signals flying through the air at the world's biggest tech show.

If it does perform as promised, it would fill a gap that Amazon missed with the Echo Plus, which only has Zigbee on board.

On the smart speaker side of things, Google Assistant is built in and, as well as the voice commands that offers (three microphone setup), there's also a touch panel on the top where you can program three scenes you want the hub to perform... much like the Logitech Pop does, or the new Elgato Eve Button.

The 4-inch tall Milo features a 2-inch driver and dual 2-inch passive radiators. We did have a little listen for sound quality during our demo but, again, the CES show floor isn't the ideal testing ground for this.

As well as the Milo, Hogar also revealed its own smart home control button at the expo - the Pebble, which lets you programme up to ten scenes which you initiate with various swipes and taps.

The Pebble also supports Z-Wave, so is really designed to work with the Milo, although it could possibly be synced up with other smart home hubs too... we'll get back to you on that one once we've had time to fully test it.