If the Terminator had wheels 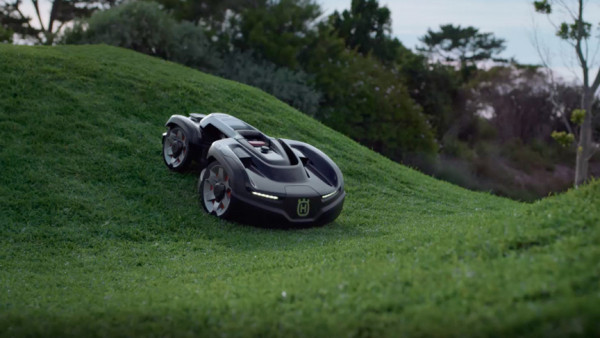 You know when you're in the gym, working out, and just when you're starting to feel good about yourself, in steps Brian McBeefCake with his rippling abs and ridiculous bench press, putting everyone in the room to shame? That's basically what Husqvarna's Automower 435X just did to every other robot lawnmower out there.

The 435X is a beast of a robot mower, capable of taking on tough terrain and seriously steep slopes. The company says the bot can handle inclines of 70%, which is huge compared to what else is out there - and 25% more than Husqvarna's 450X model, which we tested last year. If your garden is made of some tricky terrain, this might be the solution.

As you can also see, the mower is made of two parts, held together by a bridge and a rotating front axel to help it better maneuver around the garden. It even has headlights to help it navigate at night without your assistant, and there's a safety mechanism that slows the mower down if it detects an object nearby.

Neater still, the 435X will work with Alexa and Google Assistant, so you can control your new robotic friend with voice commands. You should get 100 minutes on a charge, the company says, and it takes 30 minutes to juice it back up.

Of course, don't expect any of this to come cheap. Husqvarna has priced its new mower at ┬Ż4,400 with a US price yet to be confirmed. Considering the 450X costs $3,499.95 this isn't much of a surprise. It'll be available in the UK in April, with a US launch to follow later.