The iDevices Instinct light switch puts Alexa in your walls 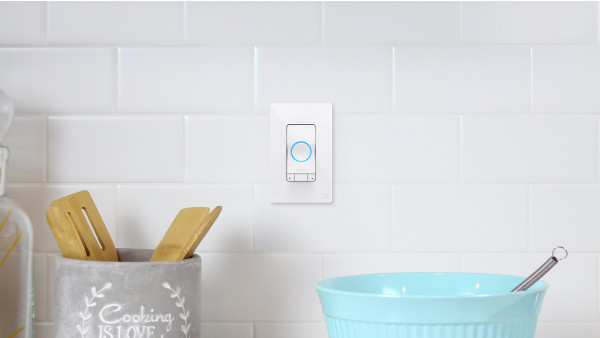 iDevices is finally launching the Instinct, the wall light switch with built-in Alexa that it first announced back at CES in 2018.

The Instinct is hard-wired into the wall, replacing your "dumb" single-pole light switch. You'll be able to use it to control your lights using the physical on/off switch or through voice commands. It houses dual far-field microphones and a speaker that's placed behind the switch, letting you give voice commands to Alexa. You'll know when Alexa is listening, too, as a blue ring will light up in the middle of the pad.

Alexa on the Instinct behaves much like Alexa on any smart speaker, so you'll be able to ask it questions and make use of Alexa Announcements, but it also means you can control your entire smart home through the switch. Chris Allen, president of iDevices, told The Ambient that the sound is comparable to an Echo Dot, so it should be good enough for hearing Alexa, but you'll also be able to play music through it, should you want to.

You'll need a separate iDevices app to get the Instinct up and running, but once it is you can control it completely from the Alexa app, meaning you can integrate the Instinct into Scenes and Routines, as well as use it to control various smart home devices.

The Instinct currently only has a physical on/off function, but Allen told us there are plans to enable the motion and ambient light sensors that are already embedded in the Instinct, however these won't be live at launch. There are also plans to support two-way and three-way setups down the line.

Sadly, there's no HomeKit support, but iDevices has a separate wall switch that does support Apple's platform (although there's no built-in Siri, but that's because of restrictions on Apple's end). Allen said that iDevices wanted to build Google Assistant into the Instinct, as well, but when they set out on making it, Google was insistent that it would need to be the exclusive partner. Google has backed down on that now, says Allen, and the plan is to get Google Assistant support added in the future.

iDevices says Alexa in the Instinct will be able to hear up to 30 feet, and there's a mute button should you ever want total privacy. Out of the gate, music streaming is only available through Amazon, but Allen says the company is working on integrating other services, like Spotify.

The Instinct is available right now for $99.95 from the company's website and from Amazon.

iDevices also has a smart ceiling fan in the works, which will also connect with Alexa (but won't have the assistant built in). The company plans to launch that next year, said Allen.